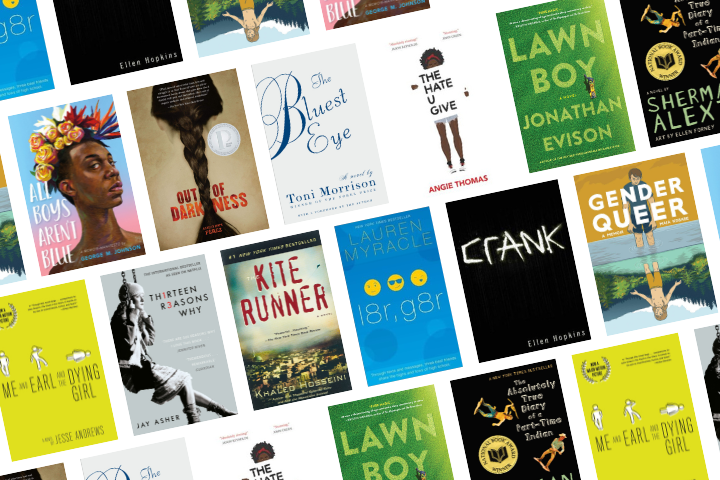 PEN America counted school book bans in the 2021-2022 school year and found an alarming 1,648 titles banned somewhere in the United States — the most comprehensive count of book bans to date. With some titles restricted in multiple places, the total count of book bans is more than 2,500.

This is the list of the most banned books in the 2021-2022 school year, according to the PEN America Index of School Book Bans. For more on what kinds of bans are happening and where, see the full Banned in the USA report.

“Started as a way to explain to eir family what it means to be nonbinary and asexual, Gender Queer is more than a personal story: it is a useful and touching guide on gender identity–what it means and how to think about it–for advocates, friends, and humans everywhere.

“In a series of personal essays, prominent journalist and LGBTQIA+ activist George M. Johnson’s All Boys Aren’t Blue explores his childhood, adolescence, and college years in New Jersey and Virginia.”

“A dangerous forbidden romance rocks a Texan oil town in 1937, when segregation was a matter of life and death.”

“From the acclaimed Nobel Prize winner—a powerful examination of our obsession with beauty and conformity that asks questions about race, class, and gender with characteristic subtly and grace.”

“Sixteen-year-old Starr Carter moves between two worlds: the poor neighborhood where she lives and the fancy suburban prep school she attends. The uneasy balance between these worlds is shattered when Starr witnesses the fatal shooting of her childhood best friend Khalil at the hands of a police officer. Khalil was unarmed.”

“For Mike Muñoz, life has been a whole lot of waiting for something to happen. Not too many years out of high school and still doing menial work–and just fired from his latest gig as a lawn boy on a landscaping crew–he’s smart enough to know that he’s got to be the one to shake things up if he’s ever going to change his life.”

7. The Absolutely True Diary of a Part-Time Indian, by Sherman Alexie, 16 bans

“Bestselling author Sherman Alexie tells the story of Junior, a budding cartoonist growing up on the Spokane Indian Reservation. Determined to take his future into his own hands, Junior leaves his troubled school on the rez to attend an all-white farm town high school where the only other Indian is the school mascot.”

8. Me and Earl and the Dying Girl, by Jesse Andrews, 14 bans

“This is the funniest book you’ll ever read about death. … Fiercely funny, honest, heart-breaking–this is an unforgettable novel from a bright talent, now also a film that critics are calling ‘a touchstone for its generation’ and ‘an instant classic.'”

“Clay Jensen returns home from school to find a strange package with his name on it lying on his porch. Inside he discovers several cassette tapes recorded by Hannah Baker–his classmate and crush–who committed suicide two weeks earlier. … Need to talk? Call 1-800-273-TALK (8255) anytime if you are in the United States. It’s free and confidential.”

“The unforgettable, heartbreaking story of the unlikely friendship between a wealthy boy and the son of his father’s servant, caught in the tragic sweep of history, The Kite Runner transports readers to Afghanistan at a tense and crucial moment of change and destruction. … Since its publication in 2003 Kite Runner has become a beloved, one-of-a-kind classic of contemporary literature, touching millions of readers, and launching the career of one of America’s most treasured writers.”

‘Kristina Snow is the perfect daughter: gifted high school junior, quiet, never any trouble. Then, Kristina meets the monster: crank. And what begins as a wild, ecstatic ride turns into a struggle through hell for her mind, her soul–her life.”