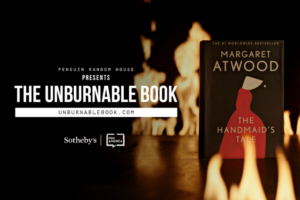 ‘Powerful Words Can Never Be Extinguished’

(NEW YORK)–Nearly 700 supporters of PEN America’s work to defend free expression reacted with cheers and applause at the organization’s annual gala tonight after watching a video showing author Margaret Atwood taking a flamethrower to a copy of her bestseller, The Handmaid’s Tale. Atwood was unable to set the book on fire, though, because it is a one-of-a-kind, fireproofed edition that she, her publisher, Penguin Random House, and the creative agency Rethink, worked together to develop for auction by Sotheby’s. Proceeds from the auction will support PEN’s work to oppose book bans and other restrictions on the freedom to write and read.

Named The Unburnable Book, it was created as a powerful symbol against censorship and a reminder that we must protect vital stories at a time of rapidly proliferating book bans instituted in public schools in more than half of U.S. states. along with educational gag orders imposed in 19 states that prohibit teachers from raising subjects and ideas viewed by some as objectionable in public schools, libraries, colleges, and universities.

The Handmaid’s Tale has once again been targeted in several school districts in this latest frenzy of censorship, along with books by writers such as the late Nobel laureate Toni Morrison, Newbery Medalist Jacqueline Woodson, and Pulitzer Prize winners Art Spiegelman and August Wilson, along with many others.

The unrelenting pace of book bans and gag orders is especially alarming because the censors’ primary targets are books about racism, gender, and sexual orientation, often written by authors of color and LGBTQ+ writers who only recently found wider space on library shelves, as well as classroom lessons about social inequality, history, and sexuality.

PEN America has been in the forefront of raising alarm over this censorship through groundbreaking reports like “Banned in the USA,” which documented 1,586 instances of individual books being banned, in 86 school districts in 26 states.

The Unburnable Book will help PEN America drive greater attention and engagement against censorship, which poses a threat to the freedom to write, potentially intimidating authors from writing about any topic that could be considered taboo or has been targeted by censorious school districts—and publishers from taking the risk of putting such artistic work out in the world.

Just last week, PEN America CEO Suzanne Nossel testified before Congress on the issue. Nossel warned that these disturbing trends at home tarnish America’s global image and undermine the effort to counter rising authoritarianism. “As an advocate who has championed stalwart U.S. leadership on free speech issues worldwide, I barely recognize my own country,” Nossel told the panel of House lawmakers.

Book bans have an ignominious history. They have been the tools of heinous regimes from Nazi Germany to apartheid South Africa. How we teach history and tell our stories is an important debate in a democracy. But draconian tactics like banning books, silencing writers, and attempting to erase stories and communities is an unacceptable attack on First Amendment freedoms, while undermining education and restricting the flow of ideas, with a widening erasure that does real damage to people and livelihoods.