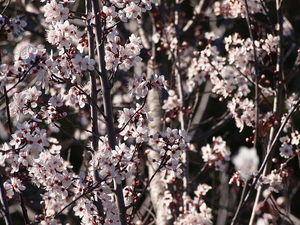 Dong Li is the recipient of a 2015 PEN/Heim Translation Fund Grant for his translation of The Gleaner Song by Chinese poet Song Lin. In pieces selected by the poet and translator from thirty years of published work, both East and West have been engaged, creating a landscape of the poet’s extensive travels, varying in form from short lyrics to long, serial poems. Read Li’s essay on translating The Gleaner Song here.

How different it is to roam in our own land,
no need of archeology for the mere knowledge. You and I
walk by the city walls. In the eastern suburb, a pavilion,
a few birds, an afternoon together shared of reunion.

Pagodas seen beyond lofty galleries, a lady holds in arms an ancient harp,
on the Qinhuai River moored boats fade into fleeting glories of six dynasties.
A window from ninety-nine inner chambers,
sunflames palely drive through.

Drizzles, passers-by, I stare at the muddy street,
above a river of bicycles, the ventriloquist swallow turns,
red horse of fog treads softly on the roof of blue tiles,
I muse on the person who named a mountain Purple Gold.

A lake, wavering patterns of its reflection difficult to describe,
naked like poetry, close to zero.
Opposite things mirror each other, drinkers in a conversation,
rivers and mountains burning close to the touch.

I breathe second moon of the year with all my organs,
I taste Nanjing as if tasting an orange.
Upon return, wind through clothes, by the city walls in sunset,
I sprint to a plum tree of blossoms in a fresh rain.

Homesick of wine. A song. Ennui, anguished reminiscence. What separates me from the faraway? Looking back on a whim, is it the mirage of the way home that wavers in the mind? Crane, the ice that flies through the void.
Should our homeland be not barbaric, there would not be more wanderers. But we do not know that the dim weather inherits sorrows from the long-gone forevers. The past is the future. In the noise of greed, the giant dragon that symbolizes our race becomes tamed by the ever-greater greed. The unicorn horn, the phoenix crown, have long vanished into thin smoke as music and mores crumbled to ashes. The world bloodlessly emerges in the double image of volcano and flood, as ruins expose the beauty of the doomsday.
Dear poet, pour your exiled voice into the long forgotten cranial cavity, nor too late, nor too early. “Liberation,” an ancient blessing for the oppressed. Unless we warm our bones with wine, aren’t the days unbearably long when we take tears for food? Wine jumps off the crane cabin and opens for us a parachute to the groundless void.
From the days dangling and now nears us, starry sky and terror near. I stand between this break and the next breaking, as if a buoy left on the river by light. Separation, restraint, living is to drink with death.

Paul Celan by the Seine

This unavoidable speechlessness: alone, in a foreign land. Alas, “winter warms us.” This impossible supineness: a dead man floats over the Seine.
Paul Celan drinks the Seine to his heart’s content. The more he drinks, the thirstier he becomes. From partial darkness to the full: he drinks away the root of the last word.
The purest go for death the earliest. Resistance off the map—you, glorious deserter, abandoned the concentration camp, the youth, the laughable Nazis. You returned all the shame to the Jews and they wandered still, were beaten and sought salvation.
Afloat, from the Seine to Jordan, from Paris to Jerusalem. Paul Celan drinks with his eyes, drinks in his own inventive ways. Alone, he drinks the two rivers from heaven and hell.
His eyes open in our eyes. “When God asks me to drink,” he says.

slow climb to the summit of heart

long and winding—behind thick clouds, the light
cascades. the well, crank like oar, water grunting
thirst sloshed into throat and eyes of vast ocean
a poplar singly stands, a ragged road
that has withstood the heavenly

ax, no road, only up and down south and north, wandering
vast loneliness. no rainbow in the sky, only mirage of shadows
a kerosene lamp lit in the grotto, a pilgrim’s body in tatters
the cane of his soul measures this long winding, this journeying

Metaphor of the Floating Life

On the twelve identical bridges,
not a single one without endless streams of traffic.

Eyes in a daze, last leaves in wind
kept trembling, not knowing where to fall.

A spurt of feelings of the divided self,
as if you stood on every one of the twelve bridges.

Listening to praise songs on wind,
you were in an ocean of raging fire.

Paratroopers of the heavy snow still gathering then,
moths of the soul chopped open candlelight of the church,

rising up intensely, they became air and darkness.
The wind cried out on the bridge, whose soul was that?

Become yourself, not the soul of another person,
cold and lonely like stars.

In the bustle of traffic and celebration of the flesh,
become a river, washing away silent sorrows.

What about the saint in the pagoda?
Hollowed eyes saw into the universe.

Drooping wings of the little monster by his feet,
covered heaven and hell in a flash.

Floating snow blanketed the land of the wanderers,
tree scars, your own traces, so glaring and glaring.

a brief history of language

not a name not a line of sight, never a thorough run of water
—slumbers of the turquoise icebergs. a severe wintry graver
dances still a transparent dance of death on the transparent coffin surface.

arrival of language at that soft slope, after yesterday’s mammoths left.
there comes a man in a birch bark coat, wearing a Dantesque pale face
as if returning from the netherworld. slowly he blurts a word out—“flower.”

Dong Li was born and raised in P.R. China. He is German Chancellor Fellow with the Alexander von Humboldt Foundation 2015-2016 as well as Literature Fellow at Akademie Schloss Solitude 2015-2017. He was Colgate University’s Olive B. O’Connor Poet-in-Residence 2013-2014. His honors include fellowships from Yaddo, Vermont Studio Center, Millay Colony and elsewhere. His work has appeared or is forthcoming in Kenyon Review, Conjunctions, Black Warrior Review, Barrow Street, Guernica, Cincinnati Review, manuskripte (Austria, in German translation), and others.

Song Lin, born in Xiamen, holds a literature degree from East China Normal University. He has published five collections of poetry (two of which were translated into French and published in France), two books of prose, and has co-edited a contemporary poetry anthology. He is the poetry editor of the journal Jintian (Today). Among his honors are Rotterdam and Romanian International Poetry Fellowships and the Shanghai Literature Prize.

It's #BannedBooksWeek and we'll have Drag Queen Storytime at 11AM and a Banned Books Street Reading from 2-4 on Saturday. Sign up to read your favorite banned or challenged book and celebrate freedom of speech with Scup and @PENamerica. https://pen.org/event/celebrating-banned-books-week-scuppernong-books/