Practical matters were the focus of the PEN America Translation Committee’s programming at this year’s BookExpo America, with panels on retranslating great works, publicizing international literature, and pitching translations to editors.

Each of the three discussions was information-packed, pairing some of the best translators working in this country today with editors and publishers who have a track record of bringing out the finest works of literature in translation.

In the first panel, on Wednesday afternoon, “Retranslating the Great Works of Literature: How and Why?” translator and critic Tess Lewis opened by noting the adage that classics deserve a retranslation every fifty years. People say this because they feel that the language of translations ages faster than the language of the original works. At the same time, Lewis observed, every translation is an act of interpretation, as George Steiner eloquently argued in After Babel, so one could claim that multiple translations enrich the literary landscape regardless of whether or not it is “time for a new one.”

Robert Weil, editor-in-chief and publishing director of the W.W. Norton imprint Liveright & Company, began his comments by challenging the adage, saying that classic works of literature should be retranslated every ten years. Weil explained that there are two main groups of readers for retranslations of great works—the trade audience and the student audience—each requiring a different marketing approach. Whereas for a publisher’s education division it may be enough to present a retranslation as the latest update of a classic work suitable for the classroom, a trade division needs to emphasize the newness of a translation, Weil said, giving the example of The Necklace and Other Stories, Sandra Smith’s new rendering of Guy de Maupassant, considered the greatest short story writer in French literature. Weil pointed out that Smith not only retranslated the stories, but also offers a fresh interpretation by grouping them thematically into tales of French life, war, and the supernatural. This increases the likelihood that the book will be reviewed as a new work, thereby expanding the pool of potential reviewers.

Translator Burton Pike, Professor Emeritus of Comparative Literature at the CUNY Graduate Center, spoke about two of his best-known works: a retranslation of Goethe’s loosely autobiographical 18th-century novel The Sorrows of Young Werther and a retranslation, with Sophie Wilkins, of Robert Musil’s modernist chronicle of fin-de-siècle Vienna, The Man Without Qualities. Pike noted that approaches to literary translation in English have evolved in recent years, as “literary translators have paid more attention to the shadings of the original work, whereas earlier translators were more focused on simply translating the story.” In translating both Goethe and Musil, Pike said he concentrated on these “shadings.” In the case of Goethe, this was chiefly about reproducing “the waterfall of Goethe’s style in the German. . .of rushing sentences, frequently broken off or run on, of cascades of clauses set off by commas and semicolons, of dashes, exclamations, and exclamation points.” For the Musil novel, Pike said the deciding factor was his discovery that Musil “often read aloud to his wife in the evening what he had written during the day,” which made him realize that “the novel’s formidable style” was spoken rather than written, and when he and Wilkins began to read their translation out loud, the rhythm “fell into place.” 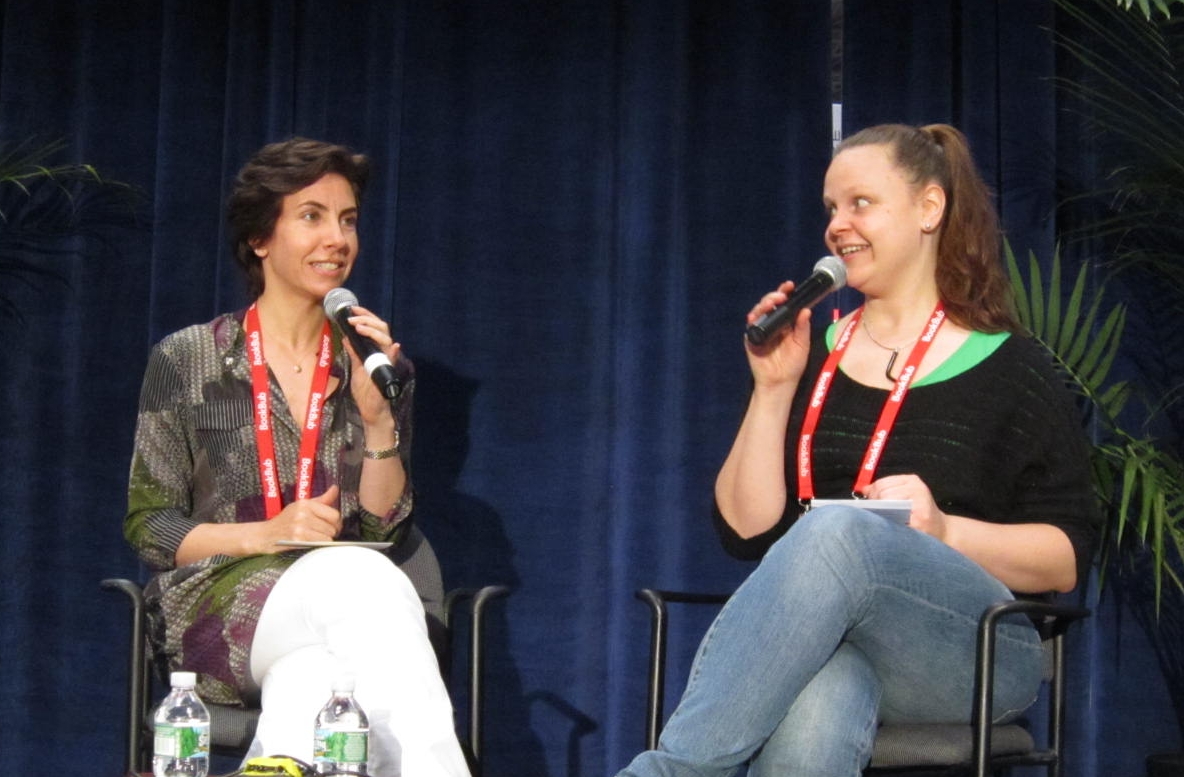 On Thursday morning, Allison Markin Powell, who translates from the Japanese, took the stage with Soho Press Associate Publisher Juliet Grames for the Translation Committee’s second panel, “Reaching the Reader: Publicizing International Literature.” Grames began by pointing out that Soho Press, as suggested by its tagline “Crime has no time zone,” has an international focus even outside the one-third of its list that is made up of translations, with another third coming from authors she described as “embedded expats,” that is, English speakers living abroad. She said that a big help in overcoming the stereotype of translated literature as “less accessible” was the support—in the form of events and publicity—that translations receive from cultural institutions associated with the countries where the books were written. She also pointed to translators themselves as an invaluable resource in suggesting reviewers, “overwhelming the doubters,” and getting the word out to readers who already have an interest in the literature of a particular country or language. “We find that translations do make money,” Grames declared. Selling translations, she added, is “a little different, but not harder.”

Grames noted how much she appreciated being able to “lean on” a translator to help publicize a book—for example, when a translator appears in public with an author who doesn’t speak English, as Powell has done with Fuminori Nakamura—since a translator who is well-prepared and comfortable speaking in front of an audience can do just as much, or more, to promote a book as an author.

Asked by Powell about the difference between “targeting” an audience and “cultivating” one, Grames replied that translators who “have connections” and can “reach out to communities” are critical to the success of Soho Press’s books, which is one of the reasons why she is such a strong supporter of the PEN model contract for literary translations, which includes provisions for translator royalties. As Grames pointed out, royalties “encourage the translator to be involved” in ensuring a book’s commercial success.

Asked whether social media sells books, Grames said flat out, “The answer is no.” She did backtrack slightly to explain that a translator sharing news of their latest book with their personal networks was “a mini yes inside the giant no,” but that in general Soho Press is “review-driven,” relying on write-ups to spur sales, including not only those in print but also, for translation titles, on web outlets such as Words Without Borders, Three Percent, and Asymptote.

In the Translation Committee’s third and final panel, on Friday morning, translator, novelist, and former literary agent Ezra Fitz sat down with Corinna Barsan, senior editor at Grove Atlantic, for “Baiting the Hook: How to Catch an Editor’s Interest.” Fitz began with a rundown of what he called the “four key elements in a pitch letter” for a translator proposing a project to an editor: 1) A description of the book: “brief, concise;” a jacket-copy approach. Fitz emphasized that it’s OK to give away the ending here. “You won’t lose the deal because of a spoiler.” 2) Why the book is important to publish and worth investing in. Here Fitz stressed that giving an academic rationale can kill a project’s chances: a novel’s “ethical relativism” is unlikely to be a strong selling point. More important are what other languages the book has been translated into, what awards it has won, how many printings it has had, and, if available, sales figures, both domestic and foreign-language. Also, if there is a built-in audience for the work in English because of its subject matter, point that out. 3) Puff yourself up. Tell the editor why you are the perfect translator for this book: whether it’s your personal relationship with the author and the trust that comes with that, or your prior publishing record and the success those books have had. 4) From a marketing point of view, what can you do to help the book? Do you know reviewers? Will your alma mater do a write-up in its alumni magazine? Do you yourself write a blog or have a following on social media that can help promote the book?

Speaking from an editor’s standpoint, Barsan said the sample the translator sends is crucial. Most U.S. editors don’t read foreign languages, so they rely on samples to make their decision whether or not to publish a book. About 15 pages in length is a minimum, Barsan said. If the translator can provide an even longer sample, that is ideal, since the more of a book an editor can see, the stronger the case they can make for the book within the publishing house. “I can fall in love with something on the basis of 50 pages,” she said. A long, detailed synopsis is important to provide, as are reviews of the original work, or of translations into languages other than English. Since most translators don’t have an agent, it is helpful to get to know editors personally, to get a sense of what their taste is, Barsan said. She said that apart from sample submissions, she also reads journals that publish translations—Asymptote, Little Star, and Stonecutter were the ones she named—for ideas about foreign authors.

One audience member, noting that some publishing houses say they accept submissions only from agents, but that if you send your translation sample to an agent it will end up in a slush pile, asked if there was a way around this dilemma. Barsan suggested that if a personal email address is available for an editor, you should just go ahead and try sending your sample directly to them.

Another audience member asked if it was helpful to let the editor know about grants that are available to support the cost of a translation, to which Barsan of course answered yes.

A third audience member, a translator herself, asked whether it mattered if a book “flopped” in its country of origin because of having broken taboos. Fitz replied that “controversy is always a good thing” in helping to grab an editor’s attention, and Barsan agreed that the story behind a book can be a big selling point, both for an editor making the case for a project in-house and, if the book is actually published, for building an audience once the work appears in print.