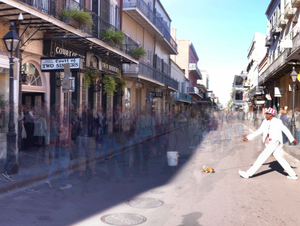 To commemorate the 10th anniversary of Hurricane Katrina, educator and poet Dr. Mona Lisa Saloy discusses how New Orleans is rebuilding, and shares two poems about the disaster and its aftermath.

Once the big storm passed, the sun beamed boldly. Everyone and their mother’s cousins gave thanks that Katrina had passed New Orleans, that we were standing. We, our parents, and grandparents paid for levees so strong, the Dutch hold back the North Sea with our design, but our levees broke and caused what we now call “The Federal Flood”, a flood that could have been avoided if the Army Corps of Engineers had not built the levees shorter and cheaper than what was designed and agreed was safest.

We, our parents, and grandparents paid for levees so strong, the Dutch hold back the North Sea with our design.

In New Orleans, we keep the centuries-old architecture. We keep our food, our music, and our traditions, which are world-renowned. Such treasures require the stability of families for many generations to create a unique culture that resonates. The federal flooding interrupted that often-parochial stability of our culture, notably visible by the many spaces in neighborhoods where there are cement front steps to nowhere. I grieve for my elders and neighbors lost, for my research and 5000-book library drowned. Yet, we are still an international community, a legacy of our geography and colonial development. Over 1000 restaurants and many musical venues serve and entertain again. Only, the poor are still really poor. Our illiteracy rate among youth is twice the national average, and in my neighborhood, it’s four times the national average. Too many families have no Internet access at home. Unemployment for black men is high; and though we are known for our building trades, almost a third of working-age folks are low skilled with low literacy.

In spite of that, those here want to be here. We are now Hollywood South, new home to movies and television. Creole cuisine is now an international phenomenon. Neighborhood Black Warriors (referred to as Mardi Gras Indians) were featured on Tremé, the HBO sensation. Some folks elevate their homes, go more green, and black families are still masking, making music, giving rocking worship services on Sunday mornings.

Personally, I was blessed to escape shelters and relied on the generosity of friends and family. I’ve moved 15 times, had 12 addresses, lived in 3 states and 5 cities—and that is not uncommon. My family home remains half-rebuilt. Insurance companies stiffed us, dropped us, and we did not get replacement monies like the other states impacted. Being an educator is such a full life of study, with the rewards of grooming eager students for success. Civic responsibility, our neighborhood association work, is taxing and gratifying; someone has to do it. I’m still stealing time to research, to document black Creole culture here, to write, while rebuilding my library one book at a time. Ten years later, I’m praying and looking forward to reading a good book on the gallery (porch) and welcoming my siblings home.

No metaphors capture this battle for New Orleans
Now defeated and scorned by the bitter mistress of Bush-era non-government
New Orleans is broken by the bullet of ignorance
Our streets are baptized by brutal neglect
Our homes, now empty of brown and white faces, segregated by
Our broken promises of help where only hurt remains
Our hearts like our voices hollow now in the aftermath

Our eyes are scattered among T.V. images of
Our poor who without cars cling to interstate ramps like buoys
Our young mothers starving stealing diapers and bottles of baby food
Our families spread as ashes to the wind after cremation
Our brothers our sisters our aunts our uncles our mothers our fathers lost
Stranded like slaves in the Middle Passages
Pressed like sardines, in the Super Dome, like in slave ships
Where there was no escape from feces or
Some died on sidewalks waiting for help
Some raped in the Dome waiting for water and food
Some kids kidnapped like candy bars on unwatched shelves
Some beaten by shock and anger
Some homeless made helpless and hopeless by it all

Where is Benjamin Franklin when we need him?
Did we not work hard, pay our taxes, vote our leaders into office?
What happened to life, liberty, and the pursuit of the good?
Oh say, can you see us America?
Is our bright burning disappointment visible years later?
Is all we get the baked-on sludge of putrid water, your empty promises?
Where are you America?

Disasters invite blame for local officials, government, ignoring
Geography. We meet Geography in fourth-grade classes of
Elementary schools, and rarely revisit until college if
You’re lucky. Then, you learn of Moraines, and how the flow of
Ice leaves hills and valleys in their wake, how old the
Grand Canyon really is, and how any coastline is
A Hurricane or Typhoon hit-list target.

Post-Katrina flooding was an unnatural disaster to a
Beautiful city below sea level, a city whose typography
Scoops are the neighborhoods making culture almost four
Centuries old and still warming the world with wonder.

We “hunker down” during Isaac, wake to thousands of dollars of
Wind damage and flooding. The week and a half without
Electricity a respite from the business of the fall term,
Deadlines we paint onto calendars, and many delays
Follow us as food spoils and thaws too quickly. We
Greet neighbors we rarely see these days of driving
Across town to shop, escaping “food deserts” and the loss of
Corner stores. I remember, two-plus years Post-Katrina, we
Danced the Second Line when the first Walgreens returned. At
Least this time, we still have our homes, our books and music,
Our kitchens and “whatnots.” Whole live 100-year-old Oak trees demolish a
House down the block on Pauger Street; the cement and fiberglass
Backer boards and wrap on my home-in-progress blown forty ways to
Sunday, fan debris on sidewalks, the street. Clean up is slow.
North Shore of Lake Pontchartrain residents blame New Orleans’ new levees. We all wait for
Insurance claims adjusters; weep at the 5% wind deductible, even for homes incomplete.

We watch in horror: Sandy’s swirls along the Northeast Coast,
Shudder to think of the fallout from the flooding to come. Like Isaac, Sandy is an
Equal Opportunity Disaster, hitting the top percent New Jersey shoreline residents as
Well as the New York City subway system. We host prayer vigils, pinch the
Pennies in our pockets to donate something, anything, to help; we know the
Long road ahead the Northeast faces, and we send what we can, while
Complaints rise with weather reports, hope for better understanding of
Geography and generosity.

See You in the Gumbo