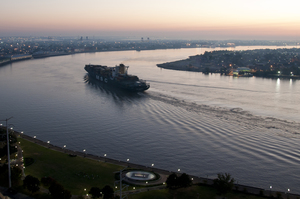 In this second of two blog posts commemorating the 10th anniversary of Hurricane Katrina, Fatima Shaik, co-chair of PEN’s Children’s and Young Adult Book Committee, reflects on the committee’s work in New Orleans, gentrification, and the state of education and free expression in the city post-Katrina.

Ten years ago, in the days after Hurricane Katrina, the world watched televised images of a sea of dark-skinned people sweltering and dying in the streets of New Orleans. Soon after, PEN’s Children’s and Young Adult Book Committee began to talk about race in our meetings, and we committed both dollars and our presence to the Martin Luther King Jr. School in the Lower Ninth Ward, a part of the country America had largely ignored.

Before Katrina, overwhelmingly poor and identifiably black people had been living in deteriorating urban settings in Orleans Parish. The city had widely abandoned public service for political patronage­—given up on public education, disdained the poor, and criminalized the clueless. In this way, our city’s sins replicated America’s.

The very privileged have found opportunities and thrived. The middle class has hung on by its fingernails. And the poor are still poor.

Plus, locally, the poor had been socially redlined over the centuries to satisfy the most diehard racists. To put this into context, The New York Times, in an 1879 article called “The Rebels Triumphant,” marked the end of optimism after the first reconstruction­—the decades immediately following the Civil War—with this quote from a southern politician: “From an economic point of view, the Negro is valuable to us…and we propose to stake off a political reservation for him, and keep him in it.” After the storm in 2005, a blunt, drunk New Yorker at a fancy dinner party told me in an appropriately satirical voice that the flood had “cleansed the gene pool.”

The first statement characterized the approximately 100 years of legal segregation. The second was indicative of the results of segregation and white flight from urban centers throughout the United States—the perception that there was still something different and unequal about blacks like us.

Now, people with good intentions—or a more tactful vocabulary—have brought to New Orleans state-of-the-art medical centers, lovely streetcars, orderly charter schools, and all kinds of wonderful facilities. To be clear, these are people who are more familiar with red tape than our previous administrations and who can pluck the resources of now-attentive foundations, people who have working electricity for their computers (who have computers), and who have the reserve funds to build, create, re-locate, and thrive while they wait for sums to enter their accounts.

People with short memories say unabashedly that New Orleans is new now, because it’s new to them.

Their skills and connections have reaped them the benefits that the national compassion for poor New Orleans engendered. Now the city is younger, whiter, and more well-heeled.

So New Orleans again reflects the ironies of the world and its challenges.

The very privileged have found opportunities and thrived. The middle class has hung on by its fingernails. And the poor are still poor. African-American household income in New Orleans rose from $23,394 in 2005 to a high of $25,102 in 2013, while white incomes went from $49,262 to $60,553 in the same period, according to statistics reported to nola.com by the local Urban League. The child poverty rate is 39 percent, almost twice the national average, although 82 percent of New Orleans children have at least one working parent, The Data Center reported.

Yes, poverty exists across color lines, and diversity of all is key. But, right now, race still exists. So mainly people with short memories say unabashedly that New Orleans is new now, because it’s new to them.

The influx of federal money after the storm helped improve the city’s infrastructure, school buildings, and housing stock, but with lopsided benefits. Take, for example, the Nora Navra Library in the neighborhood where I grew up. Built in 1954, it was the first library in New Orleans without racial restrictions—an historic moment for the city—yet the building has remained closed since Katrina, with no announced reopening date. The building plans unveiled at a recent community meeting are still not adequately funded to lift the library high enough to withstand another flood.

The complicated truth about freedom of expression is its link to privilege—read money and race.

Cynics say this is because the neighborhood is still mostly poor and black, and when it is appropriately gentrified, the work will get done right. These critics are the ones who lived in segregation and who are dying off fast. Children who have never known the legal cost of a black face—having been born after integration—may be more optimistic, unless the nation shows them otherwise.

So the CYAB has its charge.

The Martin Luther King Jr. School, once an elementary school teaching K–5, is now a charter teaching Pre-K to 12th grade. It became one of the CYAB’s projects because it was the only school in Louisiana that had a public library in the building and was in the decimated Ninth Ward. The first floor, which held the library, had flooded and, at the time, there were no plans to reconstruct it. There was also no public school system to join after the storm when the MLK teachers wanted to return.

The CYAB Committee of PEN acquired the school library of St. Joseph’s School in Greenwich Village, then rented a portion of a container truck and brought MLK books, shelves, and one beautiful, free-standing globe. The moving process included two hot summer days. Award-winning and bestselling authors and illustrators joined parents, teachers, and St. Joseph’s students to pack boxes and carry them down flights of school steps in New York. Then teachers, students, neighbors, grassroots organizations, and the La Creole Research Association unloaded the truck in New Orleans.

I like to think that the children we support now will become writers who can tell the truth beyond data.

Later, rather than simply send money to support MLK, the CYAB Committee decided in 2006 to send authors on school visits for five years. That promise has been extended for five additional years. Writers and editors, illustrators and publishers have gone to the school without honorariums, only with enough money for a plane ticket and one night in a hotel. Donations from PEN members and friends have supported about four visits a year for the last nine years—not to mention the PEN members who have returned to the school on their own dimes.

Why? PEN’s CYAB Committee has been seeding the beds of free expression by showing children forms of research, writing, illustration, publishing, and how to tell their own truths. With help from the PEN CYAB Committee and visiting writers, the Martin Luther King Jr. students created a print-on-demand book, interviewed local civil rights leaders, and are considering careers in literature. This is also the work of empowerment.

I spoke to a lawyer who had visited the school and asked a boy the usual “What do you want to do when you grow up?” She had expected to hear schoolteacher, truck driver, or something similar. She was shocked when he said “author.”

The complicated truth about freedom of expression is its link to privilege—read money and race. Financial security and a measure of social integration underpin the choice and one’s ability to enter mainstream publishing.

This is the writer’s territory. So are the stories of family cohesion despite trials, wildflowers that rise in ragged streets, and shared laughter from inside jokes.

To bring this to a micro-level, this boy who wants to be an author will first need to combat the perception of his abilities before he even gets to the stages of publication, distribution, and reviews. And honestly, he has to care enough about the outside world to want to speak up (But don’t just believe me, re-read Ralph Ellison and Richard Wright).

Right now, 10 years after Katrina, in my New Orleans neighborhood, the housing prices are rising sharply. Soon many of the usual renters will be out. One city official, a well-dressed, lovely man, asked offhandedly, “I wonder where they will go?” I don’t think he really wondered in the way that writers do: where will the residents carry the old flower-print sofa, what will happen to the golden-rain tree or the mirlitons in the yard, will their extended family stay together or will they be scattered to the winds and their generational inter-dependence lost? This is the writer’s territory. So are the stories of family cohesion despite trials, wildflowers that rise in ragged streets, and shared laughter from inside jokes. Free expression contains the power to defy stereotypes and create new narratives.

So this is one of the continued missions of the PEN CYAB Committee: to provide an on-going dialogue—more than that, friendships—among people who will figure out the way to make free expression possible. I like to think that the children we support now will become writers who can tell the truth beyond data, touch hearts, and maybe, in some small way, change history. That is why the Children’s Committee started its New Orleans efforts and is still there. Once the houses are rebuilt and painted, we care about the children who will live inside them.