Dispatches from Civitella Ranieri: A Tour of the Castle 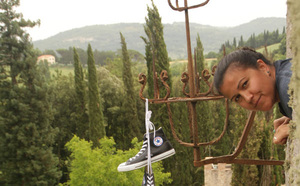 As part of a collaboration between PEN America and the Civitella Ranieri Foundation in Umbria, Italy, every two years PEN will be able to provide a unique, six-week residency to a working PEN Member. A panel of judges awarded the inaugural residency to poet Natalie Diaz, who began her stay at Civitella this May.

This is Diaz’s second dispatch from Civitella documenting her stay. Read the first one here.

The first dispatch I sent out from Civitella, the magical castle in Umbria, Italy, where I stayed as the first PEN/Civitella Ranieri Foundation Fellow, was all about language. What felt most lucky to me was that Civitella, with its mix of international artists and genres and languages, offered a space similar to the space my own work and wonders exist in. My mind’s and my heart’s circuitry were built within the intersections of language. I exist (meaning, I make sense of the world or am crushed by the world) in an undefined shape of space somewhere between or among or outside of English, Mojave, and Spanish. But somehow, even in a space that we cannot define the edges of, a space that we don’t have a name for, we have built sounds, words, conversations, stories, poems, books, desks, and homes. I was able to do that at Civitella during my residency. One way I did this—I brought a little of me to Civitella, in the form of my leather “dress” Chucks (I was in a castle, so the usual canvas Chucks weren’t going to cut it).

In this post, I’d like to introduce you to some of the beauty that I was immersed in for almost two months. Welcome to the castle, by way of my Converse.

The façade and upper most level of the castle (and Chucks). This was the path I took to the studio were I created most of the hand drawings to go along with the poetry project I was working on. And a close up, so you can appreciate the fancy of those leather Chucks. 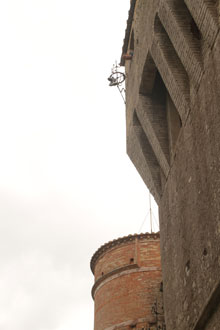 This is the right side of the castle. The sun set on this side. That spikey gadget in the corner was said to have held candles or lamps (but perhaps something more sinister?). That is one of the towers on the left. You can see the difference in the bricks—the castle brickwork tells the tale of time of construction.

This view overlooks Volta (the dining room), the kitchen (where the best Italian food is made—more about that in a later post), and the offices, as well as the ramada, where we eat dinners and watch the sun set. Finally, there is a small picnic table on the left. As the story goes, Mark Strand wrote many poems here, a whole book of poems.

(On the final three nights of your stay at Civitella, you can have a sweetheart or friend stay with you.) But this set of photos is meant to show you the secret garden. In the secret garden, artists burn many afternoons writing and drawing and many evenings spritzing and wondering and counting satellites. In the castle there are fresh flowers on the tables, and you are free to pick as many flowers as you like from here. You can see the gigantic Cedar of Lebanon and the olive trees that fellows pick during olive harvesting season. This was my favorite place on the castle grounds. Architect Thomas Tsang could often be found sleeping here throughout his residency.

The castle also has a beautiful chapel. I spent a little time in this confessional. I did some drawings in the chapel as well, of some of the icons and the crazy light that filters through the windows. It’s normally off limits. (This one might get me in trouble… with someone even higher up than Dana.) The outer wall of the chapel shows the many changes and additions the castle has survived. 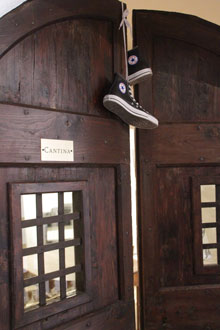 True to life, the “Cantina” is a studio. It is one of the newer studios, which we nicknamed “the dungeon” while Cecilia Lopez was working in it. In the evenings, we held midnight matinees, and projected old movies onto the white walls. The Cantina is right next to the gym and open art studio.

Sometimes, it just strikes you, that you are working in a castle. That you are living in a castle, among old stone work, stairs worn by time and generations of feet, strange busts, and portraits of Ranieri family members. But, apparently, they wore Chucks too.

The castle has a Billiardo room, which is also the name of the studio. All the balls were red, so I’m not sure if I won or not. Plus, the pianos at Civitella are amazing. While I was a fellow, Reiko Fueting (Germany/NY), Cecilia Lopez (Argentina/NY), Anna Weesner (Philadelphia), and Andreia Pinto Correia (Portugal/NY) were all there.

Unstill life with Chucks and Cricket-Bird Choir in the Secret Garden.