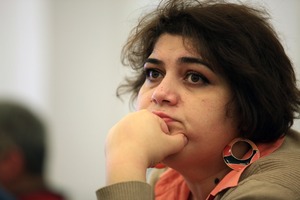 PEN American Center is proud to be a signatory of this Sport for Rights letter (in full below) to Lady Gaga asking that she appeal on behalf of journalists, like Khadija Ismayilova, and human rights defenders in jail in Azerbaijan following her performance at the European Games in Baku.

We are writing to you as members of the Sport for Rights campaign, which has been working to raise human rights violations in Azerbaijan in the context of the European Games. We are deeply disappointed by your decision to perform at the opening ceremony of the games amidst the worst human rights crackdown to date in Azerbaijan, and ask you to consider our appeal to help right this very public wrong.

Given your history of speaking out strongly for human rights and equality, we can only assume that you are not aware of the real situation in Azerbaijan. In the run-up to the games, the Azerbaijani authorities worked aggressively to silence all forms of criticism and dissent, resulting in the arrests of dozens of political prisoners. As written by jailed Azerbaijani journalist Khadija Ismayilova in a letter smuggled out of prison just last week, “Azerbaijan is in the midst of a human rights crisis. Things have never been worse.”

The Azerbaijani regime has been using the European Games in an attempt to whitewash its image, to distract international attention from the human rights abuses taking place in the country. Sadly, your performance has become part of that cover-up, a spectacular piece of propaganda for an authoritarian regime that is increasingly hostile towards its own people.

But we have believe that you still have the chance to make this right. We urge you to follow the lead of U2 frontman Bono, who made an impassioned appeal on behalf of our Azerbaijani colleagues on 12 and 13 June on stage during his concerts in Montreal. We ask you to speak out publicly, condemning the human rights crackdown in Azerbaijan, and calling for the release of the country’s jailed journalists and human rights defenders. We have provided a list in the appendix.

You could go even further in demonstrating that you are serious about the rights you so often promote by donating the money you have earned for your Baku performance to the families of Azerbaijan’s political prisoners. They are seriously struggling, having lost not only the freedom of their loved ones to a cruel political game, but having also lost vital income in a country still rife with poverty, despite the authorities’ attempts to cover it up. We believe it is wrong that you have profited while it is our jailed friends and colleagues who are paying the true price of the European Games.

Please, have some compassion for our colleagues, imprisoned for doing nothing more than speaking the truth and trying to change the situation in Azerbaijan for the better. Show the world that you do care, and that your silence cannot be bought.

Karim Lahidji, President, International Federation for Human Rights (FIDH), within the framework of the Observatory for Protection of Human Rights Defenders

Gerald Staberock, Secretary General, World Organisation Against Torture (OMCT), within the framework of the Observatory for the Protection of Human Rights Defenders

1. Nijat Aliyev – editor-in-chief of the website azadxeber.az, serving a 10-year prison sentence on spurious charges of drug possession and the illegal import and sale of religious literature.

2. Araz Guliyev – editor of the website xeber44.com, serving an eight-year prison sentence on spurious charges of illegal possession of weapons, inciting hatred, and offensive action against the flag or emblem of Azerbaijan.

3. Parviz Hashimli – Bizim Yol newspaper reporter and editor of the moderator.az website, serving an eight-year prison sentence on spurious charges of organising the sale of weapons from Iran.