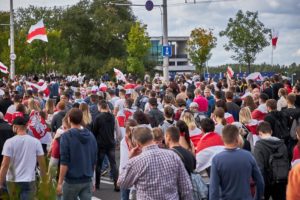 In Taped Reading, Author Margaret Atwood Reads Letter from her Belarusian Translator About the Arrests and Jailing of Writers, Journalists and Publishers

(NEW YORK)– The severe deterioration of human rights in Belarus— thousands of political prisoners jailed, tortured, hundreds of media organizations shut down, cultural figures forced to flee for their lives across borders— brought an online gathering of American and European human rights leaders and government ministers together on June 14 to address the crisis.

Organized by PEN America’s Eurasia Programs Director Polina Sadovskaya and co-sponsored together with the Permanent Mission of Lithuania and Human Rights House Foundation and 39 NGOs and States, the gathering online gave voice to the litany of abuses documented over months inside Belarus since 2020: 650 NGOs liquidated, more than 1,000 people held as political prisoners (including 100 writers), a severe crackdown on cultural and social rights, 100 media organizations shut down. The crisis has been well documented in reports by Anais Marin, United Nations Special Rapporteur on the Human Rights Situation in Belarus, who was among the speakers. On Wednesday, Marin will present her latest report to the UN Human Rights Council.

PEN America highlighted the scale of abuses directed at writers and intellectuals in its recent Freedom to Write Index that showed that 2021 was the second year in a row in which Belarus was among the top ten jailers of writers among countries worldwide. The report found that in 2021 the number of cultural rights violations in Belarus was 2.5 times higher than the number recorded in 2020: 1,455 compared to 593, respectively. The report also confirmed that to date, out of more than a thousand political prisoners in Belarus, almost a hundred are cultural figures and 28 are journalists.

Sadoskaya, the PEN America Eurasia director, opened the conversation saying: “While the number of human rights violations is growing in Belarus, the attention paid by the international community is fading. The full-scale invasion of Ukraine by Russia on February 24 has not only obscured human suffering in Belarus, but formulated new, false narratives attributing blame to Belarusian people; rumors are circulating that the people of Belarus are responsible for the involvement of the Belarusian government in the war.  PEN America has seen many instances of Belarusian artists forced to flee their country only to be later denied support from international organizations on the basis of their nationality. This must be stopped.”

Speaker after speaker addressed the depth of the crisis and called for the mandate of the UN special rapporteur’s human rights investigation to be extended. Marin, the UN special rapporteur, said: “The situation has been going from bad to worse.” She outlined the worst abuses, including restrictions on peaceful assembly; fines and long detention for “unauthorized” assembly; bans not only on protest but on cultural events and performances; crackdowns on free expression and free speech, which can lead to prison sentences of five years.”

She continued: “Defamation [regulations] are having a chilling effect on academic freedom and media freedom. Artists, journalists face threats and charges, meant to silence them. The year 2021 was marked by an unprecedented wave of repression against journalists. Sixty face criminal prosecution.”

According to Sadoskaya, the special rapporteur’s report pays particular attention to analysis of the constitutional reform in Belarus, noting the immediate negative and potentially far-reaching consequences of some of the newly-adopted provisions of the Constitution.

“This event aims to make a case on the necessity of the extension of the mandate of the special rapporteur, and I hope that the mandate will be renewed when the Human Rights Council votes later this month,” said Sadoskaya.

The gathering included a reading via video by the best-selling author Margaret Atwood (The Handmaid’s Tale, The Blind Assassin, The Robber Bride) from a letter she received from her Belarusian translator Volga Kalatskaya, who detailed the arrests and jailing of publishers, writers, and journalists.

This is the letter:

Orwell’s 1984 has been banned by the Belarusian regime. What is it, if not pleading guilty: ‘Yes, Belarus is a dystopia where “War is peace. Freedom is slavery. Ignorance is strength.”’

Andrej Januškievič, a publisher who has produced a great many books of modern Belarusian literature, and his employee Nasta Karnackaja have been behind bars since 16 May. Yet, what is it, compared to the deaths of over 260 Ukrainian children, killed by the Russian invaders?

My friend Mark Bernstein, the Wikipedia contributor who wrote an article about Russia’s aggression against Ukraine, is awaiting trial. So is Catarina Andreeva, the Belsat journalist and my cellmate, absurdly charged with high treason. They are just two of more than 1,300 political prisoners in Belarus, including about a hundred cultural workers. The numbers are steadily rising. Yet, what is it, compared to the tens of thousands of Ukrainian civilians killed in the war?

Most of my friends and colleagues have been thrown into prison or forced to flee the country, like hundreds of thousands of Lukašenka’s other opponents. Yet, what is it, compared to the millions of Ukrainian refugees, whose homes were shelled and bombed by the Russian military?

On 24 February the Lukašenka regime allowed Russia to launch an offensive on Ukraine from Belarus. Even though we did not elect the dictator and have no voice in Belarus at all, the mere idea of my country being a co-aggressor makes me scream with shame and pain, like in Edvard Munch’s painting.  Yet, what is it, compared to the screams of the Ukrainian people whose cities and towns have been razed by missiles launched from Belarus?

Deeply wounded and traumatised, the victims are willing to steer clear of everything that reminds them of this horrendous trauma, including Belarusian culture and those who speak for it. It is only natural that all Belarusians are now being associated with the current regime implicated in co-aggression, even those who have always fought against it. When your neighbours are hit by a wall, the last thing you can expect from them is to know a hawk from a heron in the picture on the wall that hit them. I mean it would be wishful thinking to imagine that the contrast between Lukašenka and his ruthlessly silenced opponents still matters to the Ukrainians.

Yet, we scream with your pain. We weep for Bucha and Mariupol. We pray for Severodonets’k and Lysychans’k. We believe in the Ukrainian Armed Forces. We stand with you. We sing with you. ‘Oi u luzi chervona kalyna…’ (Oh, the red viburnum in the meadow…).  Please don’t silence us if you can.