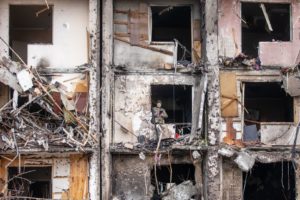 The war in Ukraine is putting a heavy burden on the journalists reporting on the ground, who are risking their lives to expose the truth. But this war–also a war of information marked by the Kremlin’s elaborate disinformation campaigns–is generating more than one threat to journalism and press freedom.

War reporting always involves risk, and as the battle intensifies, the dangers for journalists grow. We have been reminded of this tragically in the past few days. On Sunday, Brent Renaud, a filmmaker and journalist from the United States, was killed by Russian soldiers in Ukraine; his fellow journalist, Juan Arredondo, was injured. On Monday, veteran Fox News cameraman Pierre Zakrzewski, 55, and Ukrainian journalist and producer Oleksandra “Sasha” Kuvshynova, 24, were killed when the vehicle they and Fox News correspondent Benjamin Hall were traveling in came under fire in Horenka, a town northwest of of Kyiv. Hall was injured and is hospitalized.

But the war in Ukraine didn’t actually start last month; it started in 2014, when Russia invaded Crimea and fighting began in Ukraine’s Donbas region. And Ukrainian journalists have faced serious risks in Russian-occupied Crimea and the Donbas region since that time. In those areas, journalists have been detained, tried in informal, kangaroo courts by separatists, and given absurd sentences for their reporting. One of them — Vladyslav Yesypenko, a contributor to Radio Free Europe/Radio Liberty (RFE/RL)— was detained in March of last year in Crimea and just last month was sentenced to six years in prison.

Stanislav Aseyev, a Ukrainian writer and journalist based in Donetsk who was working for RFE/RL, was kidnapped in June 2017 by separatists of the self-proclaimed ‘Donetsk People’s Republic’ and ‘sentenced’ to 15 years in a penal colony. He was released in December 2019 as part of a prisoner exchange.

This past weekend, Oleg Baturin, a Ukrainian journalist, disappeared in the Kherson region, with reports that he was kidnapped by Russian soldiers. Baturin’s disappearance is an ominous reminder that the more territory Russian forces control in Ukraine, the more grave the dangers facing local journalists become.  It also raises questions about whether Russians are in fact utilizing the ‘kill list’ the U.S. government warned about prior to the invasion, which had reportedly outlined plans for the arbitrary detention, torture, or killings of journalists, activists, ethnic minorities, and others.

At the same time as the dangers are drastically increasing for reporters in Ukraine, Putin has been busy putting the final nails in the coffin of press freedom within Russia. Over the years, he has put increasing pressure on independent media, labeling outlets like Meduza and Proekt as “undesirable” or “foreign agents,” and either outlawing them altogether or making it all but impossible for them to do their work. In recent weeks he has gone even further, effectively obliterating the remaining independent media in Russia, and making it essentially impossible for Russian reporters to honestly cover the war without risking up to 15 years in prison.

Keeping his own people in the dark about what is happening in Ukraine is an essential part of Putin’s strategy for tamping down opposition at home–something he has nonetheless been unable to fully quash thus far. Meanwhile, many Russian independent journalists are being forced to leave the country in order to have any hope of continuing their work; work that is itself essential to countering Putin’s disinformation campaigns.

The fog of war is very real, and in this case, Putin’s disinformation campaigns are trying to spread that fog well beyond the battlefront, to obscure the truth for people around the world. Journalists are the best defense against those falsehoods, and their work breaks through the fog to tell us what is happening on the ground in Ukraine. It is also essential for documenting human rights violations occurring in the context of the war, and laying the groundwork for future investigations and accountability.

The international community must state clearly and repeatedly that targeting journalists deliberately is a violation of international law, that such instances will be investigated, and those who commit human rights violations will be held to account. Arbitrary detentions of journalists in the occupied areas of Ukraine must be investigated. And the international community must also stand up in defense of–and offer support to–Russian independent journalists. The war reminds us of the fundamental value of press freedom; and of the grave risks journalists take to shine a light on the truth. They deserve our support.

PEN America has championed free expression and the rights of journalists, writers, and artists in Ukraine for years, notably campaigning for the freedom of Ukrainian film director Oleg Sentsov, who was  detained in Crimea in May 2014 and sentenced to 20 years in a Russian prison on charges of terrorism. He was released in 2019.

PEN America stands at the intersection of literature and human rights to protect open expression in the United States and worldwide. We champion the freedom to write, recognizing the power of the word to transform the world. Our mission is to unite writers and their allies to celebrate creative expression and defend the liberties that make it possible. pen.org