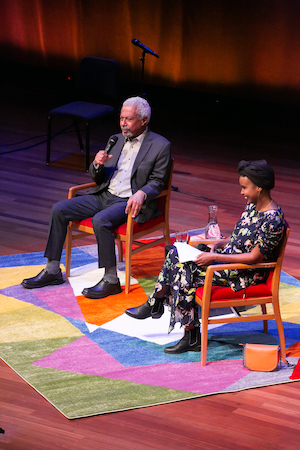 “I believe that writing also has to show what can be otherwise, what it is that the hard domineering eye cannot see, what makes people, apparently small in stature, feel assured in themselves regardless of the disdain of others.”–Abdulrazak Gurnah

(NEW YORK)– Tanzanian-born British author and 2021 Nobel laureate in literature Abdulrazak Gurnah opened the PEN World Voices Festival on Wednesday evening with a conversation that was part remembrance, part travelog, part history lesson—in sum, a journey through past, present and future animated by riveting personal details and the ideas that have seeded his widely admired novels: belonging, colonialism, displacement, memory and migration.

Describing the post-Sept. 11 atmosphere of the United States as closed off to the world, Nossel said the festival founders in 2005 intentionally sought to open up this myopic worldview through the voices of international writers: “We were interrogating those considered strangers in our midst. PEN World Voices was invented to invert that inward turn and force America to face and embrace the world. To use literature and writers as a bridge across the widening chasm.The idea was to bring authors from all over the globe to deliver messages and seed ideas in person to American audiences and in dialogue with American writers. PEN World Voices resists the idea of cultural essentialism or superiority. It resists the impulse toward myopic self-obsession. It resists the self-referential filter bubble that delimits what we read, consider and think.”

Following a performance by Sudanese-born singer and songwriter Alsarah, Mohamed, whose third novel The Fortune Men was shortlisted last year for the Booker Prize, opened the dialogue by expressing her deep gratitude to Gurnah for helping her, then an unknown writer, when she emailed him  pages of her first attempt at a novel and he responded to her, then a stranger, with kindness and guidance.

Then she asked him, “Take us back to the teenage Razak who landed at Gatwick Airport [in 1967]?”

Gurnah, who arrived in the U.K. as a refugee from the 1964 Zanzibar Revolution, responded, “I was 18 years old. Afraid, as anyone might be, as a stranger.”

From there, he told the packed audience at Skirball Performing Arts Center a personal history of the years that led up to his fleeing Zanzibar and what came later, after his arrival in the U.K.

“It was not legal to leave [Zanzibar] so you had to leave illegally. There was so much anxiety, and people told on each other. If you were having new clothes made [by a tailor] people would wonder suspiciously: ‘Hey, what’s he thinking about?’”

As a young man in Zanzibar, he said, higher education was closed to him, and “many of us had ambitions to study more. Being denied this, the deprivation was deeply felt and the deprivation intensified our desire to study.”

His goal as an immigrant was to study to become an engineer—because, as he explained, in his community it was an accepted belief that young men had to study to do  “something useful—not literature.” “That’s what I thought I would do—study to become some sort of engineer,” he said. He went on to do the opposite, studying at Christ Church College in Canterbury, earning a Ph.D from the University of Kent in West African literature in 1982 and becoming a professor of post-colonial literature for more than three decades at the University of Kent until his retirement in 2017. He published his first novel Memory of Departure in 1987, after 12 years of trying to secure a publisher.

But before college, his doctoral studies, his academic career and the publication of his ten novels, most set in East Africa, there was work as an orderly in an operating theater in a hospital. “You do learn something about the human condition because you see it opened up in front of you,” said Gurnah, drawing laughter from the audience, as did a story he told in which he stood holding a man’s amputated leg “that I had to dispose of.”

Mohamed asked about his first novel and why its tone—filled with anger and rage-—is so different from his later novels. Gurnah responded, “One of the ways I experienced displacement—why I left, what it felt like to leave and look back—I guess it did make me very angry. It did seem like a memory of departure—I wasn’t kind enough. I was in fact angry.”

Asked how he found his voice as a writer, he said, “You tell the story of one person but in fact you’re telling the story of many people. This is how you find your voice. And once you’ve found it, it’s not even something you think about.”

Mohamed complimented Gurnah on the way he writes about women, which he attributed to the fact that he has four sisters, all living, and grew up among extended family, aunts and other women. He recalled eavesdropping on their conversations as a boy, even though sometimes they were guarded in discussing certain topics and he had a hard time working out exactly what they were talking about because they used “prefixes” in their words to deliberately obscure the meaning. Smiling, he said, “I still can’t work that out. But their words had a beautiful sharpness and scorn in it.”

Mohamed raised the current British government’s response to immigration through the policies of Home Secretary Preti Patel, whose own family was expelled in 1972 from Uganda by Idi Amin along with the entire Asian minority population.

“She’s a monster,” said Gurnah. “I don’t think the biography—you’d have thought it would make a difference—has. To exclude people, facing terror and violence at home, has made it more intense. A cruel mind.”

At the end of the nearly hour-long conversation, four questions from the audience ranged from whether Gurnah’s books were now more widely available in the United States (“I can assure you, they are.”) and whether his academic scholarship continues (“Some writing will appear soon. At the moment I’m not writing anything, I’m just talking to people.”), to whether he could talk about any films that held great meaning for him.

He responded that the films he watched as a child in Tanzania had an impact on his thinking, “in a rather unexpected way.” He referred to Hollywood classics like The African Queen with Humphrey Bogart and Katherine Hepburn and the Tarzan series. “That we could sit and watch them make monkeys out of us [as black men] shows the power of a narrative that can draw you in, even though it is despising you.