Can the Written Word Make a Difference, as Global Threats Mount? 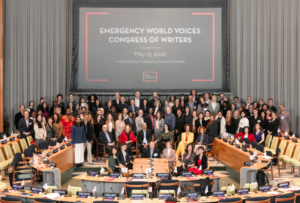 Can the power of the written word meaningfully bring about change in a world threatened by cascading crises and catastrophic events? This was the heart of the question put before 80 novelists, playwrights, essayists, poets, and journalists from 30 countries who were convened by PEN America for an “Emergency World Congress of Writers” at the United Nations on Friday, May 13. 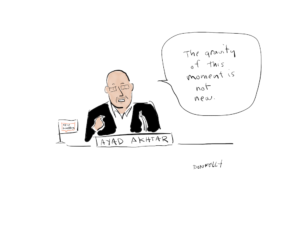 Playwright and PEN America President Ayad Akhtar opened the conversation, noting “the very space of thought itself seems under attack” and asked the group which among many global threats “merit our response. What should we as writers do more [of]?”

The response was an impassioned outpouring of concern, outrage, and yes, concrete solutions, as the assembled authors took up the grim headlines of the day and tried to make sense of this perilous moment.

The war in Ukraine, the climate crisis, human rights atrocities around the globe, the killing of a Palestinian-American journalist in the West Bank, failing democracies, rising disinformation, dehumanization spurred by technology, the denigration of facts and truth, racism, digital surveillance, “the epidemic of distraction” on our mobile phones (as CEO Suzanne Nossel put it), and many other troubles, some seemingly insurmountable, others overwhelming, were all topics up for discussion.

The gathering, which took place during PEN America’s annual World Voices Festival, was an echo of a 1939 meeting of 500 writers that PEN brought together at the World’s Fair to address Europe’s drift toward war and the rise of fascism.

Nossel noted from the outset that the Congress was taking place just across the hall from where the U.N. Security Council meets and worried that “If these are the guardians of our freedom and security, we’re in big trouble.” 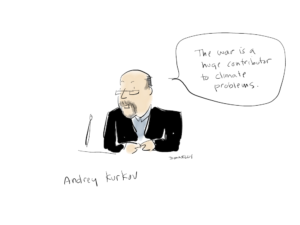 The war in Ukraine brought a delegation of writers from that country, including novelist, screenwriter, and president of PEN Ukraine Andrey Kurkov, who stated bluntly that Putin’s assault on his country was an assault on the entire world. He also raised the environmental consequences of the war and even the fate of humanity overall, saying, “Putin is trying to destroy life on Earth by menacing everybody with nuclear weapons.”

As a group, the writers seemed to unite around one point: that truth and powerful storytelling can influence and inspire people to act, even if they cannot stop evil altogether or reverse the world’s woes. 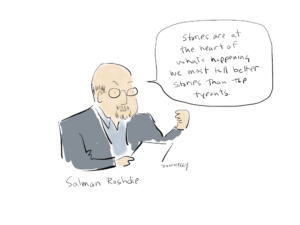 Salman Rushie elevated this point eloquently, saying, “A poem will not stop a bullet. A novel cannot defuse a bomb. But writers can still sing the truth and name the lies. We must work to overturn the false narratives of tyrants, populists, and fools by telling better stories than they do—stories within which people might actually want to live.”

His perspective was a galvanizing principle of the group, as others emphasized the role that writers can play as truth-tellers against the many threats to the planet, justice and democracy. 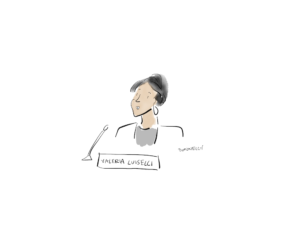 Essayist and novelist Valeria Luiselli put forward an idea “for a big oral history project to listen to people speak about climate, about their fears, about surveillance, about the border. It’s important to bear witness at this moment.” She asked, “Can PEN commit to providing the scaffolding for such an enterprise?” Later, as the event wrapped up, Akhtar asked for a show of hands as an endorsement from the group to pursue Luiselli’s idea, which received an overwhelming show of support. Clearly, there was an appetite among the group for collective action to confront individual challenges or crises writ large.

“I very much hope we can all find ways to set aside our own individual ambitions to find ways to work together,” said Meredith Taluson, author, artist and journalist. 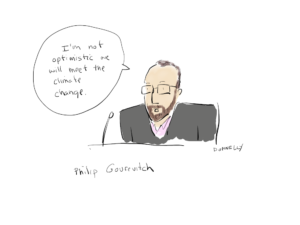 Throughout the three-hour conversation in the stately Trusteeship Council Chamber, writers expressed both hope and a loss of confidence as they tried to process the declining fortunes of the world. Author and journalist Philip Gourevitch referred to William Faulkner’s famous line from his 1950 Nobel Prize speech at the height of the Atomic Age: “I believe that man will not merely endure: he will prevail.” Then Gourevitch stated his belief that because the world has “unwisely” failed to protect the planet from the climate ravages at its doorstep, “I’m not optimistic that we can endure.”

Sportswriter and author Dave Zirin said, “Are we allowed to talk about history? The summer of 2020 saw the largest demonstrations in the history of the United States. We don’t talk about that enough. This young generation is more tolerant. They are not going to put up with bigotry and intolerance. There is a kernel there that speaks to a better world.” 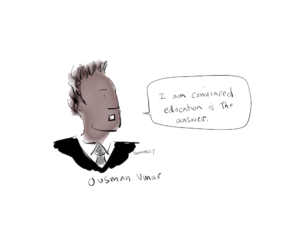 Other writers took hold of optimism, imagining possibilities through the lens of their own experiences in overcoming improbable odds. Ousman Umar, whose memoir North to Paradise tells the story of his boyhood escape from rural Ghana and his 10,000 mile journey across eight countries on foot, made a simple appeal: “The most important… is action, no matter how big or small it is.” 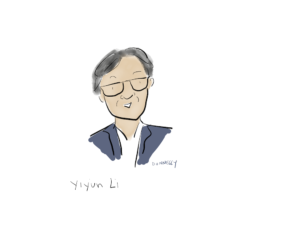 Yiyun Li, a novelist born in China who wrote propaganda for the Chinese military as a young woman, recalled a conversation with her American-born son and a friend about a poetry contest and whether they could win without using suggested keywords like “injustice” or “police brutality.” Li said the role of writers is to “make sure they don’t have to write the keywords, as I did when I was in China.”

Special thanks to Liza Donnelly, the cartoonist and author, who drew participants live during the event and whose images are included here.

Watch the full video of the Congress.

Read The New York Times coverage of the Congress. 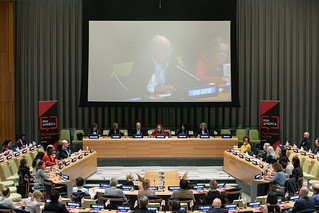