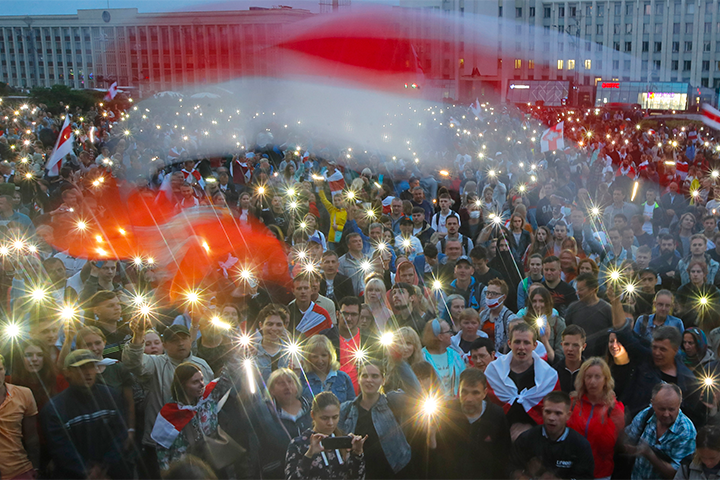 Belarusian opposition supporters activate the lights on their phones and wave old Belarusian national flags during a protest rally in front of the government building at Independent Square in Minsk, Belarus, Wednesday, August 19, 2020. Photo by AP/Dmitri Lovetsky

A version of this piece first appeared at the Atlantic Council

The Biden-Harris administration lost no time making clear that it would not let the unprecedented and ongoing human rights violations in Belarus go unnoticed. On February 18, Secretary of State Anthony Blinken announced that the U.S. State Department would impose visa restrictions on an additional 43 individuals “responsible for undermining Belarusian democracy,” bringing to 109 the total number of individuals under visa restrictions for their roles in the fraudulent August 9 election and the subsequent violent crackdown in Belarus. This is a firm and important move. But is it enough? And do visa restrictions really matter to Alexander Lukashenko and his closest circle? And if not, then what is important to them?

Lukashenko knows what’s important, and it’s his relationship to the Kremlin. On Monday, just four days after Blinken’s announcement, he reportedly met with Vladimir Putin, the president of Russia. According to Lukashenko himself, he said he was “not going to ask Putin for anything,” but planned “to discuss some areas of cooperation.” When they last met in September, the Belarusian strongman walked away with a lifeline of $1.5 billion in credit, giving him the financial independence to conduct his violent crackdown on protesters, civil society, and the press without having to worry too much about international blowback. This time, there are rumors that he asked for an amount twice that big.

Even if the conversation was limited to “cooperation,” as Lukashenko suggested, that is not a benign prospect. Who better to cooperate with on the issue of putting journalists and opposition figures behind bars if not Putin? Russia, empowered by its acceptance back into the Parliamentary Assembly of the Council of Europe in 2019, has predictably ignored the Council’s rules. For the first time ever, the Russian government officially refused to fulfill a requirement of European Court of Human Rights to release opposition politician Alexei Navalny. Certainly, in terms of domestic repression and disregard for international obligations, there is plenty for Lukashenko to learn from his neighbor.

Monday’s meeting coincided with an unprecedented crackdown on independent media and human rights organizations in Belarus. On February 16, police searched the homes and offices of more than 30 journalists and human rights defenders. On Thursday, two journalists of the Poland-based broadcaster Belsat, Katsiaryna Andreyeva and Darya Chultsova, were sentenced to two years in prison for reporting on protests. The unjust persecution of journalists is nothing new for Lukashenko, but a two-year sentence for streaming a protest is a new low even for the Belarusian government. This sentence is a signal intended to cow independent journalists in the country, and clearly reflects the confidence that Putin’s backing offers Lukashenko.

The European Union must now deal with Russia’s defiance of the European Court of Human Rights’ ruling on Navalny’s case. Also on Monday, at the E.U. Foreign Affairs Council meeting, 27 E.U. ministers discussed possible E.U. actions toward Russia. It is crucial, though, that the E.U. does not forget Russia’s role in empowering Lukashenko and enabling the crackdown in Belarus. The E.U. determined that the Belarusian election was neither free nor fair, and it should not ignore Russia’s role in continuing to prop up an illegitimate government that is engaged in a sustained campaign of human rights violations. Despite many calls from the international community, the Belarusian government has made no efforts to resolve the situation; if anything, its abuses are getting even more brazen.

In laying the foundation for revitalizing U.S. diplomacy, Secretary Blinken has said that “America at its best still has a greater capacity than any other nation on earth to mobilize others for the better.” Belarus presents an opportunity for the U.S. to partner with the E.U. in order to ensure that pressure is maintained not just on Lukashenko, but on Putin as well.