The Crisis of Local News: Journalists and Members of Congress Look for Answers 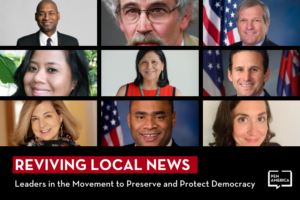 (New York, N.Y.)– Local news has been in crisis for close to two decades now but solutions have largely eluded an industry that just a generation ago delivered a robust menu of local ads and news coverage, from town council meetings to high school football scores, to every small city and town across the country. Now, aside from the handful of national newspapers that are thriving, a beleaguered industry is shrinking nationwide. PEN America’s 2019 Losing the News report sounded an alarm and started the conversation. The organization was the first to call for a rethinking of local news as a public good.

Over 1,800 newspapers have closed since 2004, with an additional 200 disappearing during the pandemic alone, leaving more than three million Americans with no newspaper at all. A thousand more newspapers have downsized to the point that they are little more than a thin sheaf of newsprint with spotty ads, wire copy filler and little original reporting.

The urgency led PEN America to bring together a panel of experts on Monday for a virtual conversation in search of solutions. Washington Director Nadine Farid Johnson, who moderated the discussion, noted the deleterious effect of a lack of local news, connecting the dearth of factual, community-relevant information with a decline in civic participation: “Without reliable information on how tax dollars are spent, how federal policy affects local communities, and whether local elected officials are meeting constituent needs, residents cannot make informed choices about who should govern them. This is unhealthy for a thriving democracy,” Farid Johnson said.

Before an online audience of over 200 people, the group addressed two critical questions: How can local news be saved? And more ominously: Is it even possible at this late stage in their decline?

The journalists represented a Who’s Who of important writers and editors, among them three Pulitzer Prize winners. And even those who now figure prominently on the pages of national newspapers noted that they worked their way up through the ranks of small city newspapers. The panelists included: Washington Post media columnist Margaret Sullivan;The New York Times opinion columnist Charles Blow; Art Cullen, editor of the Storm Lake, (IA)Times; Karen Michel, CEO of IndiJ, publisher of Indian Country Today, and Willoughby Mariano, Atlanta Journal Constitution investigative reporter.

Three members of Congress–Representative Mark DeSaulnier (CA-11), Representative Marc Veasey (TX-33) and Senator Brian Schatz (D-HI)–provided remarks for the event. The three have introduced legislation to strengthen local news. Senator Schatz and Congressman Veasey, a former journalist at the Fort Worth Star Telegram, have introduced the Future of Local News Act. The bill, based on PEN America’s own recommendations in its 2019 report, would establish a committee of 13 members to examine the decline of local journalism and assess potential means of supporting the revitalization of the industry. Congressman DeSaulnier, a founder of the Working Group on Saving Local News, is a co-sponsor of the Future of Local News Act and has introduced the Saving Local News Act (H.R. 6068) to make it easier for newspapers to become nonprofits.

During the 90-minute conversation, DeSaunier cited examples of the decline of local news including the fact that coverage of the California statehouse in Sacramento had dwindled precipitously. “The lack of local government coverage is alarming to me as a former local government official. Most Americans learn about government in action by reading coverage of school boards or city councils. Where are they getting it now?”

The conversation was thoughtful, nuanced and insightful but more than one of the journalists admitted that solutions likely would continue to elude the industry without large infusions of cash from government, wealthy individuals or foundations or the sourcing of new revenue streams–observations aligned with PEN America’s reporting on the issue.

Willoughby Mariano underscored this point. She said in the early 2000s, the Atlanta Journal Constitution had over 500 journalists working in its newsroom. That number today has shrunk to 150, she said, adding: “I’m told our entire newsroom is the size of The New York Times Opinion Section,” drawing chuckles from her fellow panelists.

“People call it resources but honest to god it’s cash, it’s money,” she said. “It’s going to take a lot [of it]. It seems like an impossible task to get back to 2008, which was not even a banner year. So good luck to us.”

Still, the journalists agreed on one point: Newspapers of all sizes have to figure out how to become “indispensable” to readers in a world in which everyone is a click away from free information. Charles Blow, who worked at the Detroit News prior to his N.Y. Times career, put it succinctly: “Figuring out how you can be a necessity to readers. Figuring that out is the focus of journalism now.”

But Blow also said putting the focus on reader “appetite” alone can become a double-edged sword that invites reader interest to dominate the news rather than what’s important.

Blow said: “The New York Times opinion section is ballooning now because that is what [metrics show] people want. The metrics (clicks on articles) are propelling decisions on what to cover.”

He added: “The appetite of the consumer is dictating the kinds of news we cover. We’re drifting dangerously into where (opinion) is the whole of news, when in fact it’s a tiny thing. So metrics become tricky. Foreign news is very expensive to do; if people are not clicking, do you continue to do that? If they (readers) won’t eat the spinach do I just overload them with frosting?”

Some of the journalists raised a few positive developments that were renewing local journalism as a counter-balance to what they admitted was overall a very troubling picture.

Karen Michel, CEO of IndiJ Public Media, which publishes Indian Country Today said her organization, now a nonprofit, is experiencing “fast” growth based on a combination of diverse revenue streams: grants from funders, digital ad sales and direct contributions from individuals. Her achievements have allowed ICT to add to staff (now 16 to 18 full time employees), produce a weekday newscast, focused on native populations, and there are plans to add bureaus to its current offices in Washington and Alaska. She said ICT was now sharing a reporter with another news organization in Oregon, a model that offers the possibility of more growth.

Margaret Sullivan, who was editor-in-chief of The Buffalo (N.Y.) News, her hometown paper, before becoming public editor of The New York Times and now media columnist at the Washington Post, highlighted a digital-only newsroom in East Lansing, MI, previously a “news desert,” that relies on citizen journalists, and low-paid volunteers to cover local news, including both retirees and young people. She suggested this might be a model elsewhere.

The journalists talked about how the industry could elevate the public perception of how critical journalism is to the strength of democracy.

Sullivan connected the dots between the decline of local news and our polarized political landscape. She noted that in the past people subscribed to their local newspapers not only for news in their area, but also for coverage of top national and international stories. “People are not getting basic good information and the result is more polarization and divisiveness. Without reliable information people cannot make informed choices. As a result, political participation declines. Local news gives people a sense of community. Without it, we can’t hold public officials accountable. There’s more corruption. People vote less. There’s less positive involvement in the community. It exacerbates problems.”

She even went so far as to suggest a national ad campaign or a public relations effort by the industry to build public support for the critical work journalists do, though she added: “Of course, that’s not my area.”

Sullivan said: “How can we change the narrative to help people understand what’s at stake to save the industry? We have a story to tell. We can use our storytelling skills to tell it. Newspapers were so fat and happy for so long, since 2007 or 08, that’s changed but I don’t think the message [to the public] has caught up with reality.

Art Cullen, whose 3,386-circulation family-owned newspaper in Storm Lake, IA, is the subject of a widely seen documentary film about his effort to keep local journalism alive (the paper is staffed by the Cullen family), said community journalism is at the heart of what the paper tries to achieves along with “accountability journalism.”

“Accountability permeates everything we do. Every school board meeting we cover, every budget story– we’re showing the public how public officials are stewarding their tax dollars. Every little thing we do is accountability journalism. Reweaving the fabric of a community about a common set of facts. That’s our credibility.” He also noted that the Storm Lake Times is “going to need philanthropic help” to sustain itself. The paper is the second-smallest in history to win a Pulitzer Prize, which it did in 2017 for Cullen’s editorial writing.

Mariano also emphasized the fact that journalists fight rising disinformation and can try to disconnect people from conspiracy theories. She said: “Local news is decisive when it comes to combating disinformation. We speak to an audience that isn’t programmed. They’re not listening all day to conservative talk radio. We talk to the persuadable middle. We help create that shared set of facts. If we’re very good at debunking disinformation, we can help heal the partisanship and divisiveness.”