Ukraine Writers Speak Out on Their New Lives at War 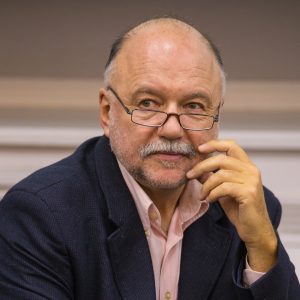 (New York, N.Y.)– During an online conversation from western Ukraine on March 3, PEN Ukraine President Andrei Kurkov, the novelist and screenwriter, shared a bleak prediction about his country’s state of war:  “If [Russian President] Putin cannot incorporate Ukraine into a Russian empire, he is prepared to destroy Ukraine. We won’t give up fighting, but the Kremlin won’t give up either.”

Kurkov, the author of 19 books, described how Ukrainians were coping. “This society is learning to live and survive in a time of war. This is a tough school. But we are all focusing on helping.” He said some writers he knew had joined the military but many were involved, as he is, in trying to assist those in need and keep people safe as best they can.

He cited his own effort that day in trying to find someone to pick up and drive an elderly woman from the hospital and bring her back home. He described Ukrainians who were going from building to building removing tracking devices placed by Russian soldiers intended to help fighter planes bomb specific targets. He told the audience that Ukrainians were mobilizing to deliver food to the elderly and infirm who could not leave their homes. He even suggested that Ukrainians who live alone band together and sleep on alternative nights in one another’s home to stave off fear and loneliness. “We need to feel we are not alone.”

Polina Sadovskaya, PEN America’s Eurasia Program Director, in opening remarks, said: “As a literary community, we stand in solidarity with writers in Ukraine and all of the people in Ukraine. We are calling for the withdrawal of all Russian forces from Ukraine to avoid a further humanitarian catastrophe.”

Former U.S. Ambassador to Russia Michael McFaul, now a professor at Stanford University, was the moderator of the discussion. He opened by asking Kurkov and his fellow PEN Ukraine colleague, writer Victoria Amelina, where they were located, whether they felt safe where they were, and how their emotions have ranged since the start of the military assault a week ago.

“Angry, of course,” Amelina responded. “We are devastated and we are very sad. But anger is the prevailing feeling.” Moments later, she added: “And pride.”

McFaul picked up on her perspective, saying Americans widely admired Ukraine for its defiance in the face of the assault by Russia.  “We are in awe of your President and your army.”

The Ambassador said that the Ukraine invasion had at least for the moment united a country with deep and wide political divisions.

Asked by McFaul what they felt the West—both governments and individuals—could do to support Ukraine, Kurkov said the primary need was for donations to humanitarian organizations for food, medicine and aid to wounded soldiers. But he also said: “Ammunition and weapons. Very soon, we will need building supplies to rebuild after the air strikes.”

He and Amelina also urged Americans to participate in street protests over the unprovoked Russian attack and to call on their members of Congress to gain support for a no fly zone over Ukraine. Chillingly, she implored: “Please don’t let them kill me and my friends.”

A third writer and translator, Vakhtang Kebuladze, joined the conversation late from the road, where he had just helped friends reach a military checkpoint on their way to leave Kyiv. He offered a sober assessment of how the invasion had upended his writing life in only a few days: “The topic of our lives now is only war. Writing is on hold. I am only a man trying to survive and I haven’t any words to describe this experience, this Russian cruelty.”

On the larger implications of the invasion, geopolitical and historical, Kurkov and Amelina both advanced the idea that the Russian incursion would not end with Ukraine.

Amelina also said “They (the Kremlin) envy our history. They envy our independence. They will be destroying our museums, our cathedrals, all of our heritage.”

Kurkov raised what he predicted would be the coming spectre of human rights atrocities especially against writers and intellectuals, who Putin has targeted at home and in other countries or areas that fell under Russian control.

McFaul said it was “imperative” that preserving Ukrainian culture and heritage become part of the resistance to Russia’s bid for control over the country.

He said those in the West who engage in spheres of culture, the arts, academia and writing should be educating the public about Ukraine as a priority. He noted that in the United States academic teaching about Ukraine was inevitably (and wrongly) included under “Russian studies.” “We need to change that,” he said.

Kurkov urged the audience to read about Ukrainian history and its current politics, citing the books of American author and journalist Anne Applebaum, among others.

For now, humanitarian supplies are securely getting into Ukraine and reaching those in need, but Amelina said her “worst fear” was that Russia would attempt to encircle Ukraine to cut off supply routes

McFaul closed by noting that the questions posed by  the audience, which included people from the United States, Canada and Europe, expressed love, solidarity and admiration for Ukraine.

PEN America’s Washington Director, Nadine Farid Johnson, concluded the discussion saying: “We know that the words of writers are some of the most powerful weapons we have in the fight against authoritarianism. Your words, your observations, bring truth, affirmation, and hope. We know the power of your words, because we see the lengths that dictators and their enablers go to silence them.”