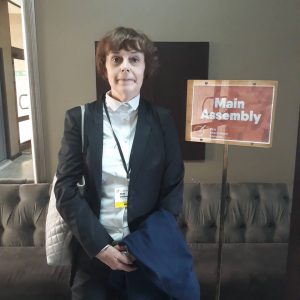 In this series, PEN America interviews the leaders of different PEN centers from the global network to offer a window into the literary accomplishments and free expression challenges of their respective countries. This month, we spoke with Elena Chizhova, the president of St. Petersburg PEN.

From the point of view of freedom of speech (both in the narrow and broad sense), the last few months in Russia have been unusually alarming. We have the stark impression that the problems are approaching from all sides. There is so-called “Case of the Seventh Studio” (in the west it is known as the “Case of director Kirill Serebrennikov”), which is perceived by the intelligentsia as an attempt to sow fear in the souls of people whose lives are somehow connected with free creative expression. There is also the prosecution of the regional specialist and head of the Karelian branch of the human rights organization Memorial, Yuri Dmitriev, who is persecuted for the unmistakably false accusation of “making child pornography.” In actuality, Dmitriev is known (now widely) as a man who discovered previously abandoned and nameless burial sites of victims of the Stalinist terror of the 1930s, and in particular, the famous “Sandormoch,” where Dmitriev, with the help of a few voluntary assistants from among the local residents, unearthed the remains of more than 9.5 thousand victims. We are sure that the authorities, displeased with his unauthorized research, are using this falsified “business” to get back at him.

Amidst these disturbing events also lie our own, here in St. Petersburg, notably, the attempt to transfer St. Isaac’s Cathedral to the Russian Orthodox Church, which is now picking up more and more public real estate and is perceived by many as a kind of “ideological department” of the ruling regime; the desire of the authorities to close (under far-fetched pretexts) the European University at St. Petersburg, one of the best higher educational institutions of our city; and the incessant attempts of the central government to “reform” the Russian National Library—which, in the opinion of professional librarians, is nothing other than an attempt by the authorities to introduce a rigid censorship framework within the library.

These are the “Russian realities” of the Putin era, to which St. Petersburg PEN could not fail to respond, consistently and actively opposing these and other neo-Soviet manifestations by which the current regime is trying to turn back Russian time.

Trying to frame this in general terms, the main challenge that St. Petersburg PEN faces is that the Russian authorities have currently set themselves the task of “provincializing Petersburg.” Turning it from the northern capital, where the level of education is high and there exists a strong disposition toward protest, into a “quiet and humble” city. We see our duty as resolutely counteracting this. This is what we are actually doing under the slogan “This city is ours!” To this end, we write open letters of protest; members of St. Petersburg PEN act as experts in the falsified trials; journalists, members of our organization, publish articles and investigations in the Moscow and St. Petersburg media, in the hope that these political affairs can be stopped by putting them in the public eye. With this same purpose, we speak at city rallies and various events.

Would you share your sense of the literary traditions in your region?

I think the literary traditions of St. Petersburg are not in need of a special presentation. In our city lived those whose names constitute the enduring pride of Russian and world literature: Pushkin, Lermontov, Gogol, Dostoevsky, Akhmatova, Blok, Mandelstam, Brodsky, Dovlatov—more names could be listed indefinitely. Maybe it’s the exceptional St. Petersburg aura, favorable for the development of culture, which grows on our “marshy soil” in spite of all the tragic peripeteia of Russian and Petersburg history. Among the tragedies that worked to destroy Petersburg are the Bolshevik Revolution of 1917, which changed the course not only of Russian but, to a large extent, world history (we are currently celebrating the centenary of this event); the repressions of the ‘20s and ‘30s (Stalin’s in 1937–38 constituting only the tip of a bloody iceberg); the siege of Leningrad, which claimed 1 million human lives (only counting civilian casualties); and much more that our beautiful and long-suffering city endured during the Soviet 20th century. Many times, it seemed that the city would never recover from the devastation and human grief. But time passed and brought forth new writers, poets, directors, artists.

It took a whole series of generations to bring about a genetically modified type of person, such a Homo Peterburgus, for which the local “inhuman, most intentional” (in the words of Dostoevsky) space is a natural environment. In the crucible, where this new homo-homunculus was brewed, the fire of history burned for three centuries, at once brightly flashing up, then almost extinct—depending on whoever conjured it, Life or Death.

The city is mystical, mysterious, Gogolian. . . . Continuing the traditions of St. Petersburg culture, we, who live and work in this city, are writing a new “St. Petersburg text.” Its originality is that the world is changing and the culture is changing with it and with us. But this “text” has its own enduring characteristics, which with a certain degree of convention can be called “the continuity of the cultural tradition.”

Yes, the St. Petersburg soul is a dreamer, but not the former one, not the same one who in an existential confusion rushes over the grids of rivers and canals, not always knowing firmly what is down there: the water or the firmament. In our days—having passed through all the historical sorrows and interruptions—this soul, which grew up in the confined space of a courtyard or on a window sill, most resembles a Japanese bonsai tree. Did the city itself endow us its broken, warped soul, or is it our own outlook? But in our novels, stories, poems, the struggle between life and death, good and evil, does not stop. The only difference is that in the 21st century they fight with each other indirectly, as though it were tactful. This is a tribute to the postmodern reality, which all of us—and Russian writers are not an exception here—have to pay.

But no attractions of the postmodern world (one of the most dangerous manifestations of which many consider the current Putin regime) will make St. Petersburg writers and poets believe in the notorious “end of history,” or that life has no meaning. Contrary to all that we see, we observe, and we fight against, there is a hope in us: The day is not far off when everything in Russia will fall into place, and the angels adorning the Petersburg palaces will sing and rejoice. And we will sing a victorious song with them. Or our children. Or, at the very least, the children of our children. This faith helps us to remain writers, poets, and artists. It gives us strength to withstand the vulgar challenges of the times.

My first time appearing abroad, I often asked my fellow writers: Are they familiar with Russian (and, in particular, St. Petersburg) literature? Now I do not ask, because I know (in 9 out of 10 cases) the answer: Oh yes, of course—Tolstoy, Dostoevsky, Pasternak . . .

I’m afraid that it is difficult for the humanities to break through the asphalt of “world politics.” To overcome our universal habit of living in the rough framework of “current political events,” to which we have lost far more important human coordinates: literature, music, theater. Words cannot express how much I pity all of us!

It is hard to accept the fact that no current readers or any of their distant descendants—separated from us by distance of Tolstoy, Dostoevsky and Pasternak—is to discover the wonderful novels of Edward Kochergin, Ksenia Buksha, Nikolai Kononov, Eugene Vodolazkin, Leonid Yuzefovich, or the poems of Sergei Stratonovich, Tatiana Voltskaya, Andrey Chernov, and many other St. Petersburg writers and poets. I humbly hope that my novels will be in this series.