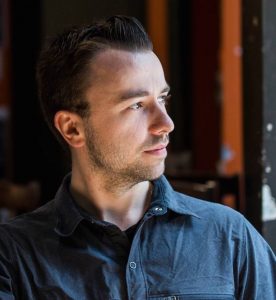 In this series, PEN America interviews the leaders of different PEN centers from the global network to offer a window into the literary accomplishments and free expression challenges of their respective countries. This month, we feature PEN Québec. We spoke with Félix Villeneuve, who has served as the head of the CODEP (Committee for the Defense of Persecuted Writers) since April 2016.

Right now, at PEN Québec, in the CODEP (Committee for the Defense of Persecuted Writers), we are doing mostly translations. We’re translating RANs, calls to action, declarations and resolutions, etc., into French, so that we can disseminate them in Québec. That is why I haven’t been working on specific projects since I’ve been at the helm of the committee. The PEN center in Québec is very active, but also quite small member-wise, and the CODEP was empty when I came in. For a while I was alone in there, and I couldn’t concentrate on any specific projects. The center itself, and more specifically our Women’s Committee, worked for the release of Homa Hoodfar, a Canadian-Iranian academic and teacher at the University of Concordia, in Montreal. She was detained in Iran because she had been vocal about women’s rights. We communicated with her family, wrote letters, and did events. She was finally released after a couple of months, last September, and she came back to Québec. We are proud of our involvement in that case. And of course there’s the Raif Badawi case, because Raif’s wife and kids live in Sherbrooke, Québec, and we’re kind of close to that case. Since I’ve been head of the committee, I haven’t really been able to concentrate on that, which annoys me because I would very much like to take more actions in this case. That’s what I’m planning to do in the future. Now that the committee is slowly shaping up and getting new members, we can finally have some room to breathe. We’re between 60 and 80 members now, at PEN Québec, and four members in the CODEP. We had a spike of new subscriptions with the Québec congress in 2015, and we’re having a campaign right now to try and mobilize people, bring new blood into the center. The problem is that you have to be very active in order for your name to circulate, and you need to be known—and renowned—to get new members, but you need new members to do those things. So right now we are trying to reach out to people, to go to the Québec writers and say, “Look, PEN is doing this and this, and by adhering to PEN Québec, you are actually supporting PEN International and free expression,” explaining the importance of the mission, and so on. So hopefully the center will grow.

In Québec we have the particularity of being the main French province of Canada, so the linguistic problem is very present in our center. Defending the right to speak, write, and express yourself in French is not as challenged in Québec as it used to be, but it’s still something you need to monitor, because any acquired right can be taken away from you pretty quickly if you don’t keep an eye on it and become vocal when it is under attack. So we’re very sensitive to the language issue. And it is not limited to French; we’re also working with Native American languages, too, because there are a lot of First Nation groups in Québec, and they all have their own languages, the Innu and the Wendat and so on. So we actually have several First Nation authors—I wouldn’t go so far as to say that they write exclusively in their own language, but they do promote a renewal of their culture, which is very important because those people are part of our country, they’re part of the social life of the province, and they’ve been marginalized long enough. We feel strongly about defending these people’s right to free expression and helping them promote their culture and revitalize it.

This is a tricky question because in Québec, the word literature is not much older than a century. Our earlier writers in the late 1800s are not read much anymore, if you except, maybe, Nelligan, who was mostly inspired by French poets like Baudelaire, Verlaine, Leconte de Lisle, etc. We started really seeing a booming literature around the first and second world wars, and even then, we would read a lot of French literature. What’s funny is that we don’t follow French trends much anymore. Québec has a very complicated kind of literature, in my opinion. There’s always a quest for identity. Whichever way you look at it, I feel that every writer in Québec is somehow drawn to this question. They’re always looking for, you know, who am I? Where do I come from? Where do I belong in this world? Because we’ve always had the feeling of being … I would say oppressed. I don’t know if it’s too strong a word. But we have been conquered and we have been shamed for a while there. It is through sheer pride in our language and culture that we were able to preserve our identity, and it didn’t come without a cost. It shows through all of our art, I think, but mostly through any kind of engaged, political writing. As a whole, we are very engaged writers; we always have some sort of political point to make, whether about Québec’s independence [or] how to keep the language alive. We also have that duality where we either feel strongly about using proper, “clean” French, or using the … “joual,” we call it. It’s the Québécois way of speaking French. The accent is very different from what you’d hear in France. And so what happens is that you have writers who write in standard, literary French, and others who write in different levels of “joual,” and it coexists quite beautifully. And at the end of the day, it’s always about finding one’s place.

The emergence of younger authors, I think. Twenty or thirty years ago, the authors you would hear about would be people who had a career or some experience behind them, but today you have a lot of young writers who are writing their first or second book and becoming popular almost overnight, because, I think, their style of writing is very direct. The literature itself has a much more city-centered mindset. The individual isolated in the masses. That’s usually the feeling I get from those books. It’s called social atomization, when society creates indefinite social masses in which every individual ends up isolated. That feeling of loneliness in a crowd, you know? It seems to be a feeling that’s coming back over and over in Québec literature, as far as I can tell. Maybe younger writers have a hard time finding a place in the older culture, the culture I was raised in. Québec has become very multicultural and much more open, whereas 20 or 30 years ago we were more focused on the question of independence, and we had very powerful cultural voices. Whether we want it or not, the question of independence ended up isolating some of us from the rest of the world, because you end up always being in a defensive stance, which makes it hard to find value in anything that is not Québécois. You don’t want to make concessions because you feel like you might erode your language and your culture. I think the younger generation broke free from that mindset, for better or worse, and as a result, they’ve been feeling lonely in Québec because our culture, up to now, doesn’t promote that much. It wasn’t built on openness; it was built on survival. It’s a bit of a clash between generations. And you see it in the political landscape, too: The old parties are slowly falling apart, parties that were powerful 20 years ago, and now they’re falling apart or reshaping because young people don’t identify with them. And all of that perspires through the literature.

There is a boom in the writing world and I cannot keep up with the amount of young authors that come out almost daily. If you’re talking about Native Americans, there’s Natasha Kanapé Fontaine, who’s a First Nation Native American poet who’s starting to be well known outside of Québec also. She writes about her experience as a member of the First Nations—the relation to the soil, to nature, to the feeling of belonging, to the constant fight to be recognized, etc. Ironically, I’m not a huge fan of Québec writers, which is kind of weird to say because it’s the culture I’ve been raised into. Of course, some people also read only Québécois and they know everything about those writers. I’m just more attracted to what’s happening beyond the horizon. Dany Laferrière, who is originally from Haiti, is probably my favorite Québécois author. His work melds his experience of living in Québec with his Haitian roots. He’s found a very fluid way of expressing this feeling; his texts are beautiful. There is also Kim Thúy, an author of Vietnamese origin who arrived in Canada among the Boat People. But if you really want a taste of Québec’s roots, the classics are always a good place to start: Émile Nelligan, Gaston Miron, Gilles Vigneault, Félix Leclerc on the poetry side. Gabrielle Roy. Then you have Michel Tremblay and Réjean Ducharme. If we’re talking about my region specifically, which is the region of Abitibi-Témiscamingue, on the northeastern side of the province of Québec, you have poets like Richard Desjardins and Sonia Cotten, who happens to be a good friend of mine. And of course, there are legions of authors I don’t know.