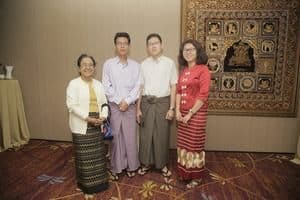 In this series, PEN America interviews the leaders of different PEN centers from the global network to offer a window into the literary accomplishments and free expression challenges of their respective countries. This month, we feature PEN Myanmar. PEN America has collaborated in the development of PEN Myanmar since its inception in 2013, supported through the generosity of the Horne Family Charitable Foundation.

PEN Myanmar always strives to find a balance between revitalizing Myanmar literature, and defending and promoting freedom of expression. All of our projects fall into these two categories. In 2016, for example, we released seven statements urging the new government – specifically the News Media Council, the parliaments and the military – to respect the media freedom and to ensure free expression as a fundamental human right. Responding openly to the assassination of U Ko Ni, the senior advisor of NLD, in January of this year was another big call for justice made by PEN Myanmar.

On top of that, we have been working on a media development legal reform to the News Media Law 2014 and sent our comments and recommendation to the Citizen Fundamental Rights, Democracy and Human Rights Committee under the Upper House (the House of Nationality). The Committee is reviewing our comments and will pass it to the Bill Committee. PEN Myanmar will be involved throughout the amending process as one of the stakeholder. Also, our Publishers Circle has been working on the repeal of the Printing and Publishing Enterprises Law.

Moreover, PEN Myanmar legal review committee is working on amending country’s other repressive laws and tools that undermine free expression, which includes advocating for the abolishment, editing or amending with public consensus of the following:  the Telecommunications Law, the Electronic Transaction Act, the Privacy Law and encouraging the formation of the Right to Information law.

A free expression environment that fosters informed dialogue, protects open debate, and promotes government transparency and accountability is a crucial foundation for democratic reform. In mid-November 2016, PEN Myanmar got together with experts from partner organizations to reflect on the state of free expression in Myanmar midway through the National League for Democracy (NLD) government’s first year. As a result, we produced The Freedom of Expression “scorecard” aimed to assess the progress – or lack thereof – by the new government in the key areas of free speech, media freedom, information access, and freedom of assembly. The scorecard report was released on 3 December at PEN Myanmar Annual General Conference. The one year report will be released in early May, 2017. This will be the yearly activity and PEN Myanmar will extend its networks and invite more media organizations to make the assessment report more inclusive.

Regarding the promotion of literature, we have a number of projects specifically designed to engage with readers and reflect new vital literary culture in Myanmar, such as the first formal engagement between universities and writers on the issue of translation: Link the Wor(l)ds, Literature for Everyone (interactive discussions between writers and readers, university lecturers and students), creative writing workshops, literature evenings, screen writing courses and Open Mic (Ya-Tha-Pwe’-Khinn), a monthly event where a writer meets an audience to discuss his or her writings and books.

Looking into the future, we have two big events coming up. One is the Freedom of Expression Roadshow, which is a nationwide advocacy campaign that PEN Myanmar organizes in collaboration with PEN America, MIDO and Article 19. Our team will travel around 14 states and regional parliaments as well as local CSOs and CBOs, to hold workshops on freedom of expression. Also, 2017 is a big year for literature in Myanmar – it’s the 100th anniversary of Myanmar short stories! The short story style writing was invented and first published in March 1917, so this year is a remarkable one for Myanmar literature evolution, which we have been recognizing with the theme of the short story all throughout 2016. The celebration will take place on March 18 with a series of literary panel discussions and talks.

The activities I just mentioned are a very good reflection of free expression challenges in Myanmar. The laws are restrictive, and the lack of rule and control of law is the biggest obstacle we encounter. Emerging democratic culture has clashed with the old authoritarian one. And PEN Myanmar as a rights-based organization works to strengthen its democratic structure to become a strong civil society institution as well as to empower people to create a better nation.

Currently, a tradition that is quite popular is the “literary talk.” The local youth-led libraries in every town and city of Myanmar are holding literary talk events more and more. A lot of writers and poets, including PEN Myanmar members, are busy traveling all over to give speeches and hold panel discussions in that new genre. A new style of writing has been emerging in Myanmar and the young generation is testing the art form in all its features and explorations.

As I mentioned before, art exhibitions, literary talk, art performances and other shows are looking to find their rightful place in Myanmar literature. Many young poets are trying a new style of writing poems, inspiring and inspired by contemporary world poetry. Also, translating literature from other languages to and from Burmese is becoming more and more popular. To sum it all up in one word, people ask for everything new.

There is one established writer called Khin Khin Htoo, who writes stories about grassroots people living inlands, in the center parts of Myanmar. I think people would agree that the true characteristics and language of Burmese tribes is well maintained and still unexploited in that region. While her stories are very difficult to translate into other languages, as her tone and expression are very particular, she is the only writer who can present the Burmese culture and tradition in such a lovely, artistic way.

TOMORROW: Join us at 7PM ET on PEN America's Instagram for a live conversation about Inauguration Day, protest rights, racial justice, and the First Amendment, featuring @AttorneyNora in conversation with @bytamarsarai. @arspoetica_us https://bit.ly/39IEXvM

Rory Truex, an assistant professor of politics and international affairs at Princeton University, advised students enrolled in his course on Chinese politics not to take the course if they currently reside in China, the Daily Princetonian reported. https://bit.ly/39O5o38

TOMORROW: Join @ashberry813, @theSoniaG, @Eloisa_Amezcua & @SbwyBookreview founder Uli Beutter Cohen for a free workshop on how to build an audience for your writing and your literary community as part of our You Are A Writer series: https://bit.ly/385I8Nh.