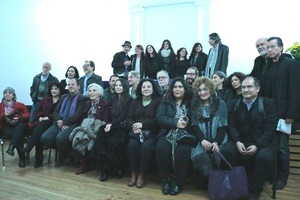 This month we feature PEN Mexico. We spoke to Magali Tercero, president of PEN Mexico.

What is the project that PEN Mexico has been working on in recent months?

PEN Mexico started 2016 off on January 14 with an event as part of the worldwide reading of poems and other texts in support of the writer and curator Ashraf Fayadh, who was initially sentenced to death. The readings were convened by The International Literature Festival Berlin (ILB). In Mexico, 23 important poets and two novelists read at a well-attended and moving reading in Casa Refugio Citlaltépetl. PEN Mexico has been working in three areas: 1) a PEN Latin America Conference organized by PEN Argentina and PEN Mexico as part of the Guadalajara International Book Fair (FIL 2016) on December 3 at 7pm. We will take advantage of the invitation extended to us by FIL to discuss, during a special meeting, the problems and interests of Latin American writers. 2) The PEN Mexico awards for literary and journalistic excellence will be granted during the third week in September, at a party at the Citlaltepetl Refuge House (Casa Refugio Citlaltepetl), an organization in Mexico City that has hosted persecuted writers around the world since 2000. 3) As soon as we get the resources, we will publish this year’s first special edition of the PEN Mexico blog, an original idea imagined and edited by Alicia Quiñones, secretary of PEN Mexico.

This September, PEN Mexico will be attending the 82nd PEN International Congress in Galicia, Spain. Last but not least, this past April, PEN Mexico participated in an event about free expression that was organized by the PEN World Voices Festival in New York. PEN Mexico also organized, with an important university, a three-day conference on Mexican journalists. The object was to discuss how Mexico is a very dangerous place for free expression. Close to a hundred journalists have been killed in the country in the last decade.

What are the key free expressions challenges facing Mexico?

The main problem in Mexico related to freedom of expression is the continued killings of journalists, particularly in the inner states of the country. Last July, PEN Mexico attended the meeting organized by the Public Prosecutor for the Attention of Electoral Crimes (FEPADE) of the Attorney General’s Office (PGR) Office. Attendees discussed the poor results of the program’s ability to defend journalists who have been threatened or killed. It was extremely important to have this dialogue with the authorities. During the first half of 2016 alone, ten Mexican journalists have been killed, and several others say they have been threatened for their revealing reports. All this has been included on PEN Mexico’s blog as well as communicated through Facebook and Twitter. It is terrible that there have been no sentences handed down for those guilty for the killings. The murder of photographer Rubén Espinoza, who was killed on July 31, 2015, for example, remains unsolved.

Would you share with us a sense of the literary traditions in Mexico?

At present, the Mexican literary tradition, with all the recent names that are well known outside the country, such as Elena Garro, Amparo Davila, Octavio Paz, Salvador Elizondo, Carlos Fuentes, Homero Aridjis, Fernando del Paso, and many others, is nurturing the new generation of authors in an unimaginable way. My generation had writers that served as a beacon in the most classical sense. However, authors such as José Agustín, María Luisa Puga, and Gustavo Sainz contributed not only to bring the youth close to Mexican literature but also to consolidate within literature the social changes after 1968, which were so important for youth and feminism throughout the globe.

Can you update us on something new in the literary world of Mexico today?

Forming part of the current literary scene are a number of poets and novelists under 40 who are beginning to be translated into other languages, thanks to both the quality of their work and to globalization. The list is generous, and I don’t want to leave anyone out. In my field of expertise, which is investigative and literary or narrative journalism as it is called in Latin America, Mexico is experiencing a boom with the birth of magazines and specialized publications. Many young authors are publishing excellent texts marked with the respect for the facts (without fictionalization) as well as a finesse in utilizing narrative tools to tell “true stories,” as Gabriel García Márquez called them. Particularly, I appreciate the work of novelists and chroniclers like Fernanda Melchor (1983) and Susana Iglesias (1978), who with great literary style know how to write about the serious problems of Mexico in 2016.

Who is a writer from Mexico that we might not know about? Would you introduce him to us?

The writer Daniel Sada (1953-2011) is difficult to translate, yet a great innovator of Mexican literature, especially with his novel It Seems Like a Lie But We Never Know the Truth (1999). Sada was described by Roberto Bolaño as one of the most ambitious Spanish-language authors, remarkable, among other things, for his baroque scenarios located in the desert. His novel One out of Two was made into a film by Marcel Sisniega, which was well received and a good film. Sada was prolific and authentic as few authors are with published storybooks as: A While (UAM-I, 1985); Nobody’s Toy and other stories (FCE, Letras Mexicanas, 1985); Taxation Registration (Joaquin Mortiz, 1990) and That So Overwhelms (Anagrama, 2010); and the novels Lampa Life (Premia Editora, 1980); Will (Leega Literaria,1989, Tusquets, 2001); One out of Two (Alfaguara, 1994, Tusquets, 2002); the already mentioned It Seems Like a Lie But We Never Know the Truth (Tusquets, 1999); Fireworks (Joaquin Mortiz, 2002); Delta Rhythm (Planeta Mexicana, 2005); The Duration of Simple Pawns (Joaquin Mortiz, 2006); Almost Never (Anagram, 2008); In View (Anagram, 2011) and his posthumous novel The Language of the Game (Anagram, 2012). He was also a poet and published three books: Places (UAM, La Rosa de los Vientos, 1977); Love is Coppery (Ediciones Sin Nombre, 2005; PS editors, 2012) and Here (FCE, 2008).