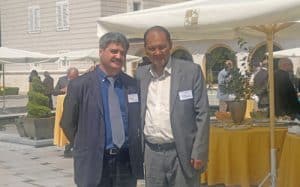 In this series, PEN America interviews the leaders of different PEN centers from the global network to offer a window into the literary accomplishments and free expression challenges of their respective countries. This month we spoke with Kaiser Abdurusul from the PEN Uyghur Center.

I’m still on the board, even though I’m no longer a PEN president, but for the past three years, I’ve been concentrating on my own writing and painting. From 2009 to 2014, I was also the chair of the Ural-Altay PEN network, which spans PEN chapters from Finland to Japan. It also included some PEN centers like the one in Basque, which doesn’t have any linguistic ties with other regional PEN networks. The PEN conference had never been hosted in Ukraine, and our network was the first to do that. We had a great conference in Ukraine, and then we held two more in Istanbul, talking about not only regional issues but Kurdish ones as well. We had more conferences in Kazakhstan and Mongolia, and later on, during the 2014 PEN congress, we hosted it in Kyrgyzstan together with PEN Central Asia. We had to work together with other sister PEN centers like PEN Kyrgyzstan, and I’m proud we were able to put it together. It was the first time in PEN’s history that it hosted a congress in Central Asia, in a former Soviet country.

This area is a most problematic and difficult region, especially in terms of fighting for freedom of expression and linguistic writers, because from Hungary to Korea, there are really only two dominant languages: Russian and Chinese. The people suffering are those trying to write in their own languages that aren’t one of the two dominant ones. No matter how talented of a writer someone is, their work is not as organic in a language other than their mother tongue. As a Uyghur writer, I cannot truly understand or write any novel, story, or poem in Chinese. It isn’t possible because Chinese is not my language. I can’t write in it. The only thing I can write in is the Uyghur language, in my language and my alphabet. It is a beautiful language, but I have no rights to write in it. Even in former Soviet countries, people are suffering as a result of trying to write in their own language. They are forced to write in Russian. Self-censorship is still strong because if you speak Russian, you are more respected. If you speak Kyrgyz you are considered not educated. This is very bad, especially in literary jobs. Additionally, we’re talking about former Soviet countries, and the presidents or leaders within the country still have old communist mentalities that make these regions dictatorial. It is our job as writers to let people know what their rights are.

The suffix “stan” means land, so in countries like Turkey, Turkmenistan, Uzbekistan, Azerbaijan, Kazakhstan, Kyrgyzstan, Tajikistan, we share the same languages, the same literature, same culture, religion, and food. The borders between us are mostly political ones. Around 200 or 300 BC, we had our first alphabet, and that began our written history. Then we started to write about the everyday lives of people. Some are written as poetry. One of the earliest poems dates back to before 100 CE, from what we call the Hexi Corridor in China. Today it is more widely called Gansu Province. When people in that region were moving out from there, people wrote about how beautiful life was there. It was full of grass, and the sheep and the goats and horses were everywhere. Most of the writing was poetry, but also a lot of it was etched on monuments—written history on stone. In 600 CE, my Uyghur ancestors created a second alphabet called the Uyghur alphabet, and that alphabet is now flourishing. Today countless books and leaflets have been printed.

Xi Jinping has created a second, very difficult cultural revolution. Everyone is betraying one another. No one can tell anything. No one can help with getting a passport either. I graduated in 1989 from high school. Until that time, all our classes were taught in the Uyghur language. We had only four Mandarin classes. We had to learn it because we are Chinese citizens, but our education was predominantly in Uyghur. Our books aren’t the same as Chinese books. In the beginning of the late nineteenth, early twentieth century, we got education books from Russia and Central Asia, which established a connection between us and Russia. Moscow is closer than Beijing for us. Especially after September 11, 2011, you can’t imagine how dramatic the change was. Today I don’t think there’s a single university teaching in Uyghur. Only Uyghur literature is taught in the Uyghur language, but all the other subjects have been changed to Mandarin. Before, the literacy rate was perhaps up to 90 percent. Today, it’s fallen back because of Mandarin. Because the people cannot learn it, students cannot pass the class.

Today one of the best poets, not only for Uyghurs, but for the whole Middle East, lives in Toronto. He was one of the first students from Xinjiang or East Turkestan to go abroad in 1986 or 1984. He studied in Damascus. Until 2005, he was married and worked there, writing everything in Arabic, but he’s the guy I remember as a child, who brought a new style of poetry to Uyghur society called “mystic poetry.” It comes from a group of poets in Asia, originating in China, and mystic writers, as we call them, writing mysteries. It’s much more like fiction, like a sort of fantasy fiction. Among these “mystic” poets is a new writer. He’s an Independent Chinese PEN Center (ICPC) member and has been a PEN International board member for the past six years: Yang Lian. He’s one of the founders of this mystic poetry. Ahmatjan Osman, the Uyghur writer in Canada, is another one of my favorite expat Uyghur poets.