Statement to UNHRC about Free Expression Deterioriation in Bangladesh 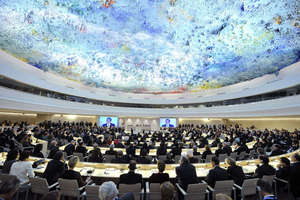 PEN America and our partners Canadian Journalists for Free Expression, Center for Inquiry, Committee to Protect Journalists, Dansk PEN, English PEN, European Humanist Federation, Finnish PEN, Freemuse, Icelandic PEN, Index on Censorship, International Humanist and Ethical Union, International Publishers Association, Norsk PEN, PEN Bangladesh, PEN International, PEN Melbourne, Reporters without Borders, PEN Sweden have submitted the following statement highlighting our deep concern at the decline in free expression in Bangladesh to the United Nations Human Rights Council for review at the June session of the Council where we will be urging the Council to act on the situation.

Recent years have seen a serious decline in respect for freedom of expression and the associated rights of freedom of association, assembly and of religion or belief in Bangladesh, a member of the United Nations Human Rights Council. Deeply entrenched and widening political differences between the ruling Awami League, the opposition Bangladesh Nationalist Party and their allies are contributing to a government crackdown on freedom of expression, with Bangladesh’s vibrant civil society also under attack. Legislative changes, poor law enforcement, lack of governmental support for the principle of freedom of expression, attempts to undermine independent media and a justice system ill-equipped to provide recourse to victims of rights violations have all contributed to the silencing of dissenting voices, through murder, imprisonment, self-censorship or exile.

Urgent and concrete steps are needed to reverse this trend and to ensure a climate where political, religious and other views may be debated and discussed in safety and where civil society is respected and enabled to fulfil its vital function of holding government to account.

Attacks on bloggers, publishers, academics, civil society activists and religious figures
Since blogger-led protests demanding capital punishment for war crimes committed during Bangladesh’s liberation war and calling for a ban on religious politics broke out in 2013, radical Islamist groups have claimed the killings of seven bloggers, free thinkers and a publisher, six since February 2015. The first victim was blogger Ahmed Rajib Haidar, who had been at the forefront of the protests. Most recently, law student Nazimuddin Samad, who wrote on issues of religious fundamentalism, war crimes, minority issues, corruption and injustice against women, was killed on April 6, 2016. After several months in hiding in 2015, he returned to his activism, stating, “It’s better to die rather than living by keeping my head down.”

The attacks have widened to include civil society actors, academics and religious figures with diverse views. University professor Rezaul Karim Siddique was killed on April 23, 2016. Two days later, Xulhaz Mannan, editor of Bangladesh’s first and only LGBTI magazine, and his friend Tanay Mojumdar were hacked to death at Mannan’s home by unknown assailants. Religious minority figures, including a Christian pastor, a Buddhist monk and a Sufi Muslim leader have been attacked or killed since October 2015.

Government reaction
While condemning these attacks, the Bangladesh authorities have repeatedly made statements and taken actions implying that the responsibility for avoiding such attacks lies with the victims.

A month after Ahmed Rajib Haider’s murder in February 2013 – rather than unequivocally supporting the right to freedom of expression and focusing on bringing the perpetrators to justice – a government committee was formed to track bloggers and social media users who made allegedly derogatory remarks about Islam and the Prophet Muhammad. The committee sought information from various platforms about certain users, and requested that several blogs be taken down. The committee publicized an email address where complaints about alleged “blasphemous” content could be submitted, and was later reported to have participated in a discussion with Islamic clerics, who submitted the names of 84 bloggers, requesting that their writings be investigated. This list was made public, and reportedly became a “hit-list” for those carrying out the attacks. Several of those on the list have been killed and others are in hiding, while many others have left Bangladesh. The net of those targeted for attack has since widened considerably.

The ambiguous response from the Bangladeshi authorities has continued with each attack. In April 2016, Prime Minister Sheikh Hasina condemned violence in the name of religion, but said that it was not acceptable to write things which hurt the religious sentiments of others, stating, “[e]veryone should maintain decency otherwise in case of any uncivilized attitude, the government wouldn’t take the responsibility.”

A legal framework that fails to protect freedom of expression and associated freedoms
Retrograde amendments to laws affecting freedom of expression have been passed in recent years, with other draft laws still under consideration. Bangladeshi civil society has expressed serious concern at the trajectory of legal reform, highlighting how fundamental freedoms are at risk.
Problematic laws and regulations include:

• The colonial-era Penal Code, which includes the prohibition of insult to the religious feelings of any class of citizens and which criminalizes defamation .

Daily Star editor Mahfuz Anam is facing scores of lawsuits for alleged criminal defamation and sedition after he had admitted on a TV chat show in February 2016 that he had erred in running corruption stories between 2007 and 2008 based on uncorroborated information provided by military intelligence.

• Overbroad restrictions in the Information and Communication Technology (ICT) Act which criminalize the online publication of material which is false, obscene, likely to harm law and order, prejudices the image of the State or hurts religious belief, attracting a maximum 14-year prison term, more severe than the penalty for offline publication. Content can be removed without a court order.

Mohan Kumar Mondal, the director of a local environmental NGO LEDARS was detained for several weeks in September 2015 following a complaint about his Facebook page after a crowd collapse on September 24 during the Hajj in Saudi Arabia in which over 2,000 people died. He remains on trial for “hurting the religious beliefs of Muslims.”

In November 2015, citing national security, the government blocked social media platforms for almost a month ahead of the final appeal and subsequent execution of opposition leaders convicted of war crimes in the 1971 war of independence.

• The National Broadcasting Policy, which unduly restricts the dissemination of news, photos, or videos.

Problematic draft laws and regulations under consideration include:

• The draft Digital Security Act, which includes many offences categorized as terrorism attracting unduly harsh sentences, a lack of procedural safeguards for human rights protection and the delegation of excessive powers to law enforcement agencies without judicial oversight.

• The draft Foreign Donations (Voluntary Activities) Regulation Act 2014, which would require all NGOs receiving foreign funding to register with the Non-Governmental Organization Affairs Bureau and to obtain its prior approval for each project undertaken with these resources.

A justice system which is failing to protect fundamental freedoms
Successive governments have been accused of conducting extra-judicial executions, enforced disappearances and torture against opponents and critics with impunity. Police recruitment is partisan and inadequate; the prosecutorial system is underdeveloped; there is a lack of independence of the lower levels of the judiciary from the executive and the Supreme Court has been unwilling or unable to prevent executive interference and politicisation of justice. The failure of the state to uphold fundamental rights and freedoms allows extremist groups to spread fear and intolerance and to drive those with opposing views into self-censorship and/or exile through violent acts committed with virtual impunity.

Conclusion and Recommendations
The worsening spiral of violence must be addressed urgently. The signatories to this statement urge the Council to press the government of Bangladesh – which, as a member of the Council, has pledged to “uphold the highest human rights standards” – to:
• Thoroughly investigate the murders of bloggers, publishers, academics, civil society activists and religious minority figures, ensuring sufficient resources are allocated, make public the findings of the investigations and bring to justice those found responsible;
• End the culture of impunity for human rights abuses, whether committed by state or non-state actors;
• Ensure police provide adequate protection for all dissenting and minority voices, however controversial, particularly those who have been publicly targeted for attack; and ensure that all those requiring protection are able to access information about available measures and to request them with ease;
• Unequivocally uphold the right of all to freely express views, in accordance with the Constitution, including of those who disagree with or question the government;
• Release immediately and unconditionally anyone held solely for peacefully exercising their right to freedom of expression, including anyone imprisoned for expressing views about religion;
• Abolish all forms of censorship, repeal unduly restrictive laws, and allow the free dissemination of information in line with international human rights standards;
• Facilitate dialogue and debate about religious tolerance in line with the Rabat Plan of Action;
• Abide by Bangladesh’s obligations under the International Covenant on Civil and Political Rights (ICCPR) to protect the rights to freedom of expression, association, and assembly.

We support all those who are heading out this weekend to exercise the right to demonstrate and the right to protest. Be on the lookout for fake information and learn how to verify protest info you see online. https://bit.ly/3cxuqmw

Disinformation around these protests is NEXT LEVEL. So, we @PENamerica put a short tip sheet together for protesters & the public. Three ways to verify images, videos, sources, & news sites so you don't get duped by misleading info. There's a lot of it. https://pen.org/pen-americas-guide-for-combating-protest-disinformation/

A major breakthrough in this case. The courts agree: President Trump president can't use his powers to punish journalists he doesn't like; that's why we filed an amicus brief in this case...and why we're suing him. https://pen.org/pen-america-v-trump/