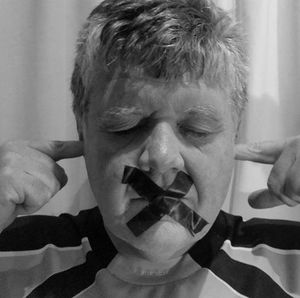 Reports stated that the journalists had been suspended for defying the public broadcaster’s orders to not cover the protest. Apart from confirming the suspensions, the SABC has refused to clarify its reasons for the suspension or confirm the identities of the three journalists. SABC spokesman Kaizer Kganyago said, “It is an employer-employee issue and we are handling it as such. We do not want to engage in the public space, it is not fair to them and it is not fair to us.”

News24 has reported that it was told that economics editor Thandeka Gqubule, Radio Sonder Grense (Radio Without Borders or RSG) executive producer Foeta Krige, and Afrikaans news producer Suna Venter were served with papers on Thursday stating that they were suspended indefinitely. The letters asserted that the matter would be investigated.

The Right2Know protest was in response to the recent decision of Chief Operating Officer Hlaudi Motsoeneng to ban picture coverage of public violence, such as the torching of public buildings, schools, and buses.

The South African National Editors’ Forum (Sanef) said it was shocked by SABC’s actions: “Sanef urges the SABC to immediately lift the suspensions of these journalists. Journalists in a constitutional democracy have a right to express themselves freely.”

The SABC has faced mounting criticism over Motsoeneng’s censorship order. On Friday, the Complaints and Compliance Committee of the Independent Communications Authority of South Africa (ICASA) heard a complaint by three NGOs, The Trustees of the Media Monitoring Project Benefit Trust, the Freedom of Expression Institute, and the SOS Support Public Broadcasting Coalition, about the order’s breach of a number of laws and professional codes relating to the conduct of the SABC news services.

It has been pointed out that the unrest, torching of buildings and buses, and looting of shops that occurred in Pretoria in the past week were not pictured on SABC TV news services. The violence began as a protest over the African National Congress’s (ANC) selection of a mayoral candidate in the upcoming local government elections but rapidly degenerated into crime, looting, and destruction. Motsoeneng argues that the presence of journalists and photographers taking pictures of the destruction and the showing of the footage on TV encouraged others to resort to crime and violence.

Judgment on the ICASA hearing was reserved.

PEN joins Sanef in its call to lift the suspension of the three SABC journalists, Thandea Gqubule, Foeta Krige, and Suna Venter. PEN also calls on the SABC to drop the ban on protest picture coverage; the ban constitutes strict censorship and is unacceptable conduct for a public broadcaster that is supported by taxpayers’ funds.

PEN South Africa will send a copy of this protest statement to the Minister of Communications, Faith Muthambi, with a request that she call on Motsoeneng to lift the unacceptable censorship of violence reporting and to restore the SABC to its status as a professional public broadcaster.