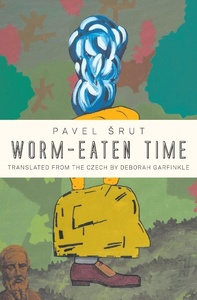 I remember the first time I saw the title of Pavel Šrut’s collection of poetry Worm-Eaten Light (Červotočivé světlo). I was in Pavel’s Prague apartment working with him on the English translation of his bibliography for the Hans Christian Andersen Award competition. He’d been nominated for the prestigious award for his children’s book, The Odd-Sock Eaters (Lichožrouti), and while I was fairly familiar with Pavel’s work after the Velvet Revolution, some of which I had translated, his children’s books and rock music lyrics, I was intrigued both by the evocative title and its publication date, 1969. The date was at a time when I thought Pavel’s work had already been banned by the communist government who had taken over in the wake of August 1968’s Soviet Invasion of Czechoslovakia and put a stop to the free expression that had been the legacy of Prague Spring. When I asked Pavel about the book, without saying anything, he reached up to a nearby shelf, pulled down a slim volume of poetry with and handed it to me to keep. I believe he told me as I looked at the book that it was one of the two copies he had and that there were few of them. It had been banned shortly after its publication. Most of the copies had been destroyed. I put the book in my bag. Then we went back to the busy work at hand.

Later in my hotel room, when I finally had a chance to look at the book, I realized that the collection had been written in the six months following the Invasion, from the literal and figurative fall of his homeland, until December when the Cold War winter took hold of it until November 1989. This collection was Pavel’s first-hand account of the devastation he experienced in the months after the invasion and the subsequent suppression of free expression that later forced many of the country’s most prominent writers, artists, and thinkers to make the terrible choice between censorship and exile. For Pavel, the invasion came at a critical juncture in his career; he’d already established himself as talented poet. In early August, everything seemed possible; Pavel had been invited to the UK, whose poets had influenced his work as had poets from other world traditions whose work he’d been able to read and study without the fear of censorship. His aesthetics were informed by the understanding of Prague Spring that poetry has no real borders or nation; it’s its own country whose expanse and reach are defined only by the limits of an individual poet’s imagination. Then he’d returned on the evening of August 20, 1968, only to be awakened the next morning to the noise of the tanks and aircraft invading his city.

As I read Worm-Eaten Light, this Pavel revealed himself to me – one who was very different than the man I’d known for almost two decades. And the voice, too, unfamiliar. Pavel was wry, witty, nonsensical, dark, and deeply funny poet. The Pavel of Worm-Eaten Light was lyrical and elegiac, the book served as his Waste Land and Four Quartets; his “Death Fugue” and “All Souls.” But Worm-Eaten Light’s real power for me wasn’t in Pavel’s deft and moving references to great poets from the modern tradition. It was in the vision of this young man of 28 surveying the ruins of his homeland as I looked on with him as the realization unfolded that the world he’d known was altered forever and dying. The light of the future, that of his family – his wife, small daughter, Veronika, and son, Pavel, who’d just been born into the post-August surreal, apocalyptic world that was being worked into a sickly shade by the persistent turning of the blind worms who’d taken hold of the countryside. They transformed spring’s garden into a graveyard. It was this intimate Pavel reaching from that dark past to my present, as a guide describing what I never felt I had the right to ask because, for a private man, it would be an intrusion. I was a translator, not a confidant, an acquaintance from America who knew something about Czech culture and history. In August 1968, I was a kid watching the invasion on Cronkite from the comfort of my home in the New York suburbs, a world away. Reading the book was even more harrowing because, from my vantage point in the future, I knew how the light, ultimately, had worked out. Many terrible years of darkness then the sudden burst of brilliant sun. I showed up in the wake of the Velvet Revolution with all those other Americans to bask in the illusory light of Prague’s Left Bank of the 90s.

Some months after I started translating Worm-Eaten Light, Pavel, out of the blue, thanked me for the homecoming, or return, in Czech, návrat. It had been forty years since he’d been able to revisit the collection because of painful memories associated with its creation. For 10 years after Worm-Eaten Light was banned, Pavel couldn’t write poetry even if he’d wanted to because it had lost its meaning in new reality of normalization. Through my translation, he recovered that part of his original self he’d thought had been lost forever. No other moment has made me more grateful for my ability to translate Czech as when Pavel, as is the way with his generous nature, thanked me instead of me thanking him. Times have changed. Červotocivé světlo up on the shelves for all Czechs to read in the original along with my English translation. Pavel is this year’s Czech Writer Laureate and a beloved author of children’s books. An animated film based on the most famous of them is about to be released. Pavel’s come back to himself and to Prague and Pavel Šrut, the wounded brilliant survivor, to his fellow Czechs, who were cheated of his voice and vision so many years ago.

Deborah Garfinkle is a poet, writer and translator living in San Francisco. Her first book-length translation, The Old Man’s Verses: Poems by Ivan Diviš was nominated for the 2008 Northern California Book Award. In 2012, Ms. Garfinkle was awarded an NEA Translation Fellowship and a PEN Translation Grant for Worm-Eaten Time: Poems from a Life Under Normalization, selected translations from the work of the current Czech Writer Laureate, Pavel Šrut. A shorter version of the book, Worm-Eaten Light, was published in Prague in 2014 with help from a grant from the Czech Ministry of Culture. Worm-Eaten Time, the complete translation, was published this spring by Phoneme Media. She is currently at work translation a collection by the young Czech poet, Jonáš Hájek. Her criticism, translations and creative writing has appeared in literary reviews and journals in the US and abroad.