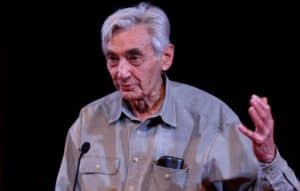 PEN America sent this letter to every member of the Arkansas House of Representatives on March 28, 2017

To the Arkansas House of Representatives:

Arkansas House Bill 1834, introduced recently by Representative Kim Hendren, aims to ban all the works of historian Howard Zinn, as well as any works referencing him, from the classrooms of public and charter schools funded by the state. Rep. Hendren believes that this bill would protect the sensibilities of the schoolchildren of your state, however, it would do so at the unacceptable expense of contributing to their ignorance.

Education aims to create critical thinkers, young people who can look at any situation and make informed decisions based on all the available evidence. By eliminating the opinions of a widely-read and acclaimed historian, HB 1834 would remove information that would allow students to study the past in its full breadth. They would gain only a narrow perspective on history, which would severely limit their ability to think critically and communicate with others who may have different views.

Howard Zinn, a Boston University professor from 1964 to 1988, is a controversial figure because of his activism and critical perspectives on American history: he wrote from the point of view of the poor, the disadvantaged, and the underrepresented. He freely admitted that his was a biased approach, but charged that history books which presented events from the winners’ viewpoint were just as biased. There are many who disagree with his opinions, who consider him radical and even un-American. But differences of opinion are the proof of a healthy America; as Zinn once said, “Democracy is in dissent.” If we ban dissent from the classroom, we leave students unequipped to analyze, debate, and come to educated conclusions.

One cannot truly understand American history without studying the variety of perspectives which inform it, just as one cannot truly understand chemistry without a background knowledge of all of the known elements and the possibility of undiscovered elements, or mathematics without considering the properties of all real numbers: both positive and negative, whole and fractions—and even imaginary numbers. Time must be spent in the classroom ensuring the grasp of all sides of these issues, not just the aspects most frequently visited and easily understood.

Rep. Hendren’s bill includes a provision that would allow the teaching of Zinn’s books if presented in a “balanced” manner with other perspectives. Balanced teaching is indeed the cornerstone of a successful education; however, it cannot be achieved through the chilling threat of censorship. The censorship of books and ideas from young people has the opposite effect from that which its’ authors desire. Rather than create a better national identity, censorship creates a narrow one. It divides young citizens rather than unifies them. When people refuse or are unable to read the perspectives of others, they live in isolated spheres which intersect only to collide.

It is better to allow our young people to read widely and deeply, and to discuss and disagree with their texts and one another in their public classrooms while led by their teachers. This subverts their pent-up attacks which appear as spray-painted slogans on city walls and the sides of houses. Those opinions could have been instead outed and infused with humanity in educational environments.

PEN America supports the First Amendment and students’ right to read, think, and discuss. We urge you to reject House Bill 1834 because the aim of education is not to close the minds of students but to open them to all the possibilities of the world. The freedom of reading—not the chains of censorship—gives young people the ability to find their morality among a variety of perspectives. Let students read, discuss, and disagree in the classroom, so that they might be better prepared to defend their beliefs and opinions on the world’s stage.