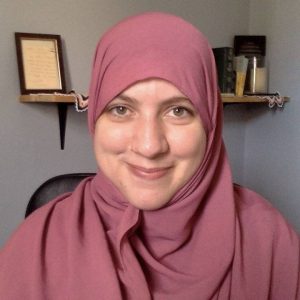 Today, we share Kaighla Um Dayo’s story on being a Muslim American. The piece is Um Dayo’s response to The M Word’s questionnaire.

Yes, I am a Muslim convert.

Being Muslim in America is to be misunderstood, feared, loathed, and even hated, merely for practicing your faith and sticking to your conscience.

As a white American Muslim from a small town in Illinois, I am probably the only Muslim some people will ever meet in their lives, so I feel an overwhelming burden to be as kind and smiley as I possibly can. I smile more, am more polite, and even more careful how I drive, all because I feel worried that if I were to be too human, too real, to have a bad day here and there, it would reflect poorly on the entire Muslim population, which is a ridiculous worry to have. Rather than thinking, “Man, she’s rude!” if I am curt in my response or if I cut someone off, I know people look at my hijab and think, “Man, those foreign terrorists! Not even safe on the road with them around!” I need my neighbors and community members to know that me and my family are just as kind (and rude), just as giving (and greedy), and just as concerned (and worried) as anyone else, because we are HUMAN.