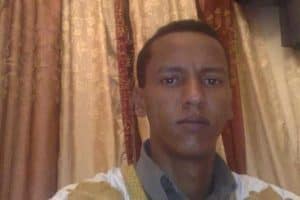 This joint letter was sent to the Mauritanian President on December 6, 2017.

We, the undersigned international non-governmental organizations (NGOs), ask you to ensure that blogger Mohamed Cheikh Ould Mohamed, also known by the name of Mohamed Cheikh Ould Mkheitir, regains his freedom since he has served his sentence. We also urge you to take steps to guarantee Mohamed’s safety upon his release.

A Mauritanian court sentenced Mohamed to death in December 2014 on apostasy-related charges after he published an article titled “Religion, religiosity, and craftsman,” in which he criticized the Mauritanian caste system. The court ruled that the article was blasphemous to the Prophet Muhammad, despite the blogger repenting in court and saying he did not intend to insult the prophet.

Based on Mohamed’s repentance, an appeals court in the city of Nouadhibou on November 9, 2017, reduced Mohamed’s death sentence to two years in prison and ordered him to pay a fine of 60,000 Mauritanian ouguiya ($172).

Having spent more than three years in prison, Mohamed was scheduled to be released, yet he remains in custody, according to a November 16 press statement from the former Justice Minister Ibrahim Ould Daddah. The blogger’s relatives told CPJ that they have not been able to visit him or confirm his whereabouts.

Since Mohamed’s imprisonment three years ago, preachers have called for his death. Moreover, your cabinet on November 16 approved a bill to amend Article 306 of the penal code that would punish “defamation to God, the Prophet Muhammad, Holy Books, angels or prophets” by death. Under the bill, repentance would not allow authorities to reduce the sentence or drop charges as they had previously done in Mohamed’s case. In his November 16 press statement, then Justice Minister Ibrahim Ould Daddah said that the law will not be applied retroactively, but Mohamed’s continued detention is deeply concerning to us.

In an April 14 interview with Radio France Internationale, Your Excellency said that you will ensure Mohamed’s safety, just like any other Mauritanian, once the court orders his release. We urge you to ensure his prompt release and safety, regardless of political pressure.

We also urge you, Your Excellency, to reaffirm your vision of Mauritania as you described it in the interview: A country where people can practice democracy and have the freedom to write “whatever they want.” Abolishing laws that curtail press freedom, and freedom of speech, would be a step towards this vision.

Thank you in advance for your attention to this urgent matter.