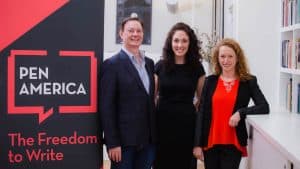 We are writing with important and exciting news about PEN’s future.

As you may know, the United States is home to not one but two PEN Centers affiliated with the global PEN network: PEN America in New York and PEN Center USA in Los Angeles. After months of discussion and planning, we are thrilled to announce that these two organizations have decided to join forces in early 2018 under the name PEN America.

Our unification, approved by our respective boards of directors, is subject to a vote of the membership of PEN Center USA, as an association under California law.  PEN Center USA members will receive a separate letter outlining that process and asking for their vote in support of unification. Because PEN America will continue in its current legal form absorbing new staff and members, no action by its membership is required.

The logic to join forces is compelling: we share a common mission, complementary programs, and an overlapping membership base. Together, we will be able to consolidate and strengthen administrative functions, communications capabilities, digital platforms, and membership services. In so doing, we will free up resources and energies for the continued expansion of our programs, centered on both the celebration and the defense of freedom of expression.

The combination of our New York and Los Angeles offices and membership strongholds will provide tent poles on each coast, enabling us to accelerate efforts to build a truly national organization. Our goal is to build a national constituency of writers and readers who are energized to defend open discourse; foster the exchange of ideas across political, geographic and ideological bounds; amplify unheard voices; and stand with writers and creators who face persecution. Over the last year, PEN America has taken new steps to engage and mobilize members across the country through events, activities and leadership development in more than a dozen cities including Tulsa, Tucson, Pittsburgh, Cincinnati, Detroit, and New Orleans.

The timing of this union is no coincidence as we face potent challenges to free speech, press freedom, the right to dissent, and the open flow of information here in the United States. Never have the voices of writers and their allies been so essential. Members of the writing community have a vital role to play in shaping public discourse, resisting encroachments on treasured freedoms, and standing with those on the front lines to safeguard the values at the heart of PEN’s mission. These treacherous times have prompted a far-reaching discussion about how PEN’s manifold efforts could be fortified. It became obvious that rather than toiling separately, we should marshal our energies, resources, and ideas in order to maximize our collective impact in the United States and around the world.

As we move forward toward a shared future, our commitment to our hometown communities of writers in New York and Los Angeles remains unshakeable. Our programs, membership bases, and physical offices in both locations will be maintained, serving as a foundation for gradual expansion into new geographies. Under the unification plan, Suzanne Nossel will continue to lead PEN America nationally alongside an expanded Board of Trustees including representatives from Los Angeles. PEN’s rich history, distinguished track record, and valued programs in Southern California will endure under the banner of PEN America Los Angeles, led by Michelle Franke, and build from strength to strength to serve as a hub for writers and readers.

We share a commitment to a united, national PEN America that will achieve ever more forceful advocacy and activism on behalf of a credible news media, the defense of truth against the scourge of fraudulent news, free speech on campus, a free and open internet, and more. We are also actively exploring ways to broaden our literary awards, public events, PEN World Voices Festival, and writing programs—all of which bring new voices into the public conversation.

We encourage you to consult our FAQs that attempts to anticipate many of the questions you may have. If you have questions or concerns that are not fully addressed, please do not hesitate to write to us. We are committed to engaging and empowering members to help build a united PEN America that can rise to the challenges of our time and do PEN’s 96-year history proud. Thank you for coming along with us, and for lending your time, talents, support, and energy to realizing the full potential of PEN America.

Twice President Trump and his allies have tried to block books the public has the right to read. And twice our argument in favor of publishing has prevailed. This July 4th, support the freedom to write. https://pen.org/donate/?utm_source=mc&utm_medium=twitter&utm_campaign=trumpbooks

Rediscover a love of reading with @peworldvoices' Next Generation Now storytimes as children's and YA authors sharing the rich worlds of their novels and exercises to spark the minds of young writers. https://bit.ly/2YSetDJ