On December 8, 2017—nine years after Liu Xiaobo’s arrest—exiled writer Liao Yiwu wrote the following reflection on the inauspicious anniversary. Liao Yiwu also included a copy of a letter reportedly sent by Liu Xia. In recent interviews discussing the letter, Liao Yiwu says that he remains dramatically concerned about Liu Xia’s health. The full text of Liao Yiwu’s appeal, including a transcription of Liu Xia’s letter, is below.

At 11 o’clock at night on the 8th of December, 2008, a hoard of police officers flocked toward the home of Liu Xiaobo and Liu Xia. As the pounding on the door resounded through their home, Xiaobo got to his feet in front of his computer and shouted to Liu Xia: “Quick, make the call!” But Liu Xia normally didn’t use a phone. . . . There was no time. Liu Xia said: “Open the door, Xiaobo.”

She’d long had a premonition. And warned him often. . . .

Xiaobo was led off with a black cloth over his eyes. Over a month later, a disoriented Liu Xia was taken to a hotel where they met again in a sealed room. Xiaobo was brought there from a place he did not know.

My dear friend, you’ve gone. In a darkness so black I can’t see the fingers of my extended hand, you could yet see a trace of light. You always insisted in a stammer: “I see, see, see it.” We didn’t see. Liu Xia says she also did not see. Her most recent group of photographs is called “Solitary Planets,” you, me, us, her, all solitary planets.

On the verge of departure, your two legs were moving up and down, ceaselessly, ceaselessly walking. Up until an hour or so later, till your breath and pulse abruptly halted.

You’re on that solitary planet. And the books Liu Xia bought you these last few years still lie in the bookcase. Your greatest regret was that Liu Xia was unable to leave the country, could not find the freedom that was properly hers. And so I write these words and publicly appeal for her freedom once more.

I hope the government of China, out of basic human decency and in accordance with the law, will release a person suffering deeply from depression who has never broken a law. I hope that Germany, the United States, France, Great Britain, and other Western democratic governments, human rights organizations, and activists would continue to negotiate with the government of China for the freedom of the widow of the 2010 Nobel Peace Prize laureate. 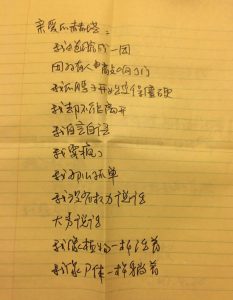