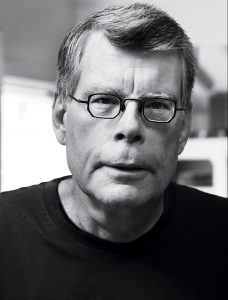 Stephen King is the author of more than 50 books, all of them worldwide best sellers and many—including such classics as It, The Stand, The Dark Tower, Misery, Lisey’s Story, 11/22/63, On Writing, Under the Dome, and many more—providing the basis for major motion pictures and serving as cultural hallmarks for generations. Among his many accolades are the 2003 National Book Foundation Medal for Distinguished Contribution to American Letters and the 2014 National Medal of Arts presented by Barack Obama. His depictions of horror and violence have also earned him a title as one of the most banned or challenged authors in recent decades. King is an impassioned advocate of freedom of expression, literacy, and access to information, which he and his wife Tabitha support through their philanthropy. King’s Haven Foundation also provides unique and generous support to writers and other freelancers in the arts who have suffered personal hardship. His outspoken defense against encroachments on free speech and pointed public criticism of policies that infringe on this and other rights have resulted in his being blocked by President Trump on Twitter.

Scribner will release King’s newest novel, The Outsider, on May 22, the day of the PEN America award presentation.

“No stranger to the dark side, Stephen King has inspired us to stand up to sinister forces through his rich prose, his generous philanthropy, and his outspoken defense of free expression. Stephen has fearlessly used his bully pulpit as one of our country’s best-loved writers to speak out about the mounting threats to free expression and democracy that are endemic to our times. His vivid storytelling reaches across boundaries to captivate multitudes of readers, young and old, in this country and worldwide, across the political spectrum. He helps us all to confront our demons—whether a dancing clown or a tweeting president.”

More About Threats to Free Expression in the United States

I stand with @StephenKing & @PENamerican in their support of freedom of expression, literacy, and access to information and add my voice to the defense against encroachments on free speech. pen.org/2018-pen-america-literary-service-award-stephen-king Send this tweet »