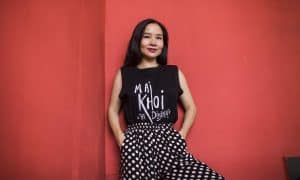 The following post was written by the Artists at Risk Connection (ARC), a collaborative project led by PEN America that is committed to improving access to resources for artists at risk, enhancing connections among supporters of artistic freedom, and raising awareness about artistic freedom. Learn more »

Mai Khoi is a Vietnamese artist, celebrity, and dissident musician who is banished from the country’s music industry and media for engaging in acts of dissent. She has protested President Trump for what she highlights as misogynistic and racist practices, met with former President Obama after being unfairly rejected from running in the congressional elections, and has spoken with Eric Schmidt about not caving into government demands to censor the internet. Khoi is currently the subject of a feature length documentary that is planned to air on Netflix in 2019.

Khoi made international headlines last November when police evicted her from her home for protesting President Trump’s visit to Hanoi. As Trump’s motorcade sped by, Khoi held up a sign that read “Piss on you Trump.” Later that evening, a man and a woman who claimed to be employees of the building’s owner forced their way into Khoi’s home and ordered her eviction on the spot. Police followed and filmed her for several days afterward. Khoi has since relocated within Hanoi, but is once again being forced out of her house (she has already been evicted twice in the last six months).

Khoi, a fiercely independent artist in a single-party communist state that criminalizes dissent, is no stranger to trouble. She has been stalked and harassed and has had her concerts raided. Despite the backlash, Khoi is a prolific artist who has released seven albums to date and is planning to release a new album with her band, Mai Khoi and The Dissidents—a group that could best be described as free jazz meets ethnic music—in 2018. Khoi’s work is inspired by a wide array of influences, and her music connects to an influential and rich tradition of political songs. Khoi, who has been dubbed the “Lady Gaga of Vietnam” for her early-career pop albums, now uses her platform as an artist to encourage conversations about often ignored issues. As Khoi told Bob Woodruff from ABC News, “I use my music to influence people, to raise awareness about democracy and human rights.”

In 2010, Khoi won the Vietnam Television Song and Album of the Year Award, the highest award for songwriting in the country. By the time she received these honors and the accompanying attention, she was already a controversial figure deeply criticized by the country’s conservative media establishment. Khoi has been a longtime advocate for sexual and LGBTI rights and a voice against violence against women. Extremely open about the challenges of being an independent artist in Vietnam, she has publicly criticized the requirement to ask permission before performing. Rather than allowing her growing success to eclipse her activism, Khoi has pursued music and activism with even more dedication.

In March 2016, Khoi broke international headlines by becoming the first Vietnamese celebrity in history to nominate herself to Vietnam’s National Assembly on a pro-democracy platform. Independent candidates have to go through a lengthy and cumbersome procedure to be authorized to run by the Fatherland Front, an organization affiliated with the Vietnamese communist party. Ultimately, Khoi was unfairly disqualified in a rigged vetting process with no independent oversight. Despite her short-lived candidacy, her nomination and her unfair disqualification sparked debates unlike anything seen in recent Vietnamese elections.

After she protested these results, the police and cultural officials raided and shut down one of Khoi’s concerts in Ho Chi Minh City under the pretext that they were conducting a routine inspection of cultural activities. They had brought a reporter with them from the police newspaper who published details of the raid in order to discredit Khoi publicly. Following this first raid, Khoi has been harassed by police, her concerts have been raided, and she has been, for all intents and purposes, banned from singing in Vietnam.

Undeterred by the Vietnamese government’s best efforts to silence her, in May 2016 Khoi participated in a private meeting with then U.S. President Barack Obama and representatives of civil society to discuss freedom of speech and the political process in Vietnam. After the public meeting with Obama, Khoi returned to Ho Chi Minh City where she resided, only to experience the first harassment by police in her home. Under the alleged pretense of checking her residential registration papers, a mandatory document in Vietnam, police tried to force Khoi to sign a document confirming she was the owner of her Facebook account. Had she signed the document, she would have been immediately arrested. After several hours, she was released, but was asked by the police to come back later. Even when Khoi decided to move to Hanoi, the harassment did not end. On July 22, 2017, 40 police officers interrupted a small concert in a private studio that she had not advertised publicly and for which no tickets were sold. Although the police ended up leaving without carrying out an inspection, the owner of the studio was fined between 1–5 million dong for organizing an artistic performance without notifying the Hanoi Department of Culture at least five days before the performance.

Despite the tireless intimidation, Khoi continues to publicly denounce all forms of harassment and intimidation made against her. The level and number of these harassment episodes worries Khoi, who has said, “I’m worried more than normal right now. I don’t like the word scared, but I’m feeling uncomfortable. I think this is definitely the worst treatment I have received up until now.” Khoi continues to find ways to advance in her projects and to ensure that none of them soften their original messages. She organizes concerts in secret venues and broadcasts them out to the world on Facebook. She is now recording a new album with Mai Khoi and The Dissidents, which includes band members Nguyen Duc Minh and Quyen Thien Dac. The avant-garde and experimental musical trio is unapologetic about its message and, as Khoi describes, “give[s] voice to the unspeakable. Unlike other musicians here, we don’t ask for permission to perform or submit our lyrics to the censors.” Until her protest against President Trump brought her back to the limelight, Khoi had been trying not to provoke the authorities too much until she completed her album, which exchanges the perky agitpop tracks she is best known for in favor of darker, folk- and jazz-inflected songs such as “Re-education Camp.”

Khoi also hopes that 2018 will see the five-year project Bamboom! come to life. This original circus act explores the ideas of eastern philosophy and uses bamboo-based instruments made by the musicians themselves. Khoi is the group’s sole singer, an actress, and a musician. She is also deeply involved with Seaphony, an orchestra that seeks to be the first pan-Southeast Asian orchestra comprised of ethnic minority musicians. Seaphony’s first iteration was made up of more than 50 Vietnamese ethnic musicians and culminated in a performance at the Hanoi Opera House on December 12, 2017.

The pressure Mai Khoi faces reflects what human rights groups say is the largest and most persistent crackdown in the communist nation in years. Vietnam is currently holding at least 84 political prisoners or dissidents for crimes such as “spreading propaganda against the state” or “abusing democratic freedoms.” In many cases, they have been prosecuted for posting critical comments on Facebook.