The Absurd Year in Educational Censorship, From Gay Penguins to the Gettysburg Address 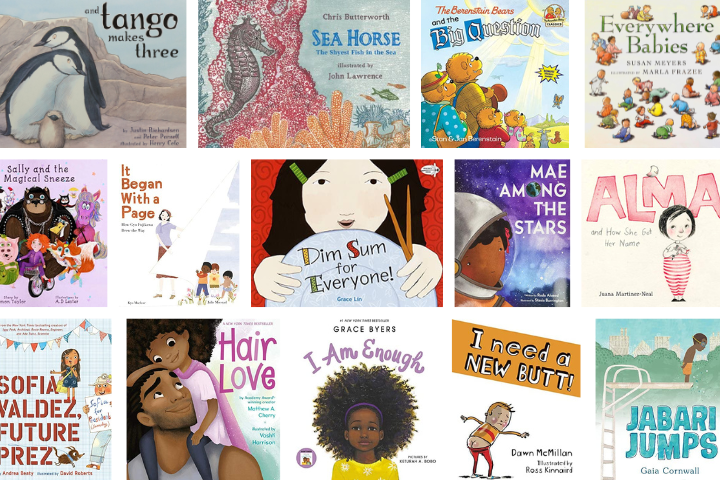 It has been an absurd year for educational censorship.

The past year has been a challenging and sometimes frightening year in education. Legislators, activists, and lobbyists have descended on both K-12 and higher education to censor, restrict, and intimidate. Most commonly, they have targeted curriculum and books about racism, gender, sex, and history, using fear to limit students’ educational horizons, and sending the message that some ideas—and even, some identities—do not belong in public schools, libraries, or universities.

The state of educational censorship continues to worsen. But as any free speech advocate will tell you, efforts to censor often bring unexpected consequences: benign speech gets banned accidentally, laws backfire on their own supporters, and administrators scramble to define the undefinable.

In that spirit, we’ve collected some of the most head-scratching stories in educational censorship from the past year.

1. School districts across the country ban books about animals

Penguins. Bears. Bunnies. Seahorses. What do these animals have in common? More and more, children’s literature about animals is being swept up in the movement to ban books, usually from efforts to remove books that represent LGBTQ+ identities. It goes to show that the censorship crusade knows no bounds–implicating books of all stripes, spots, fur, or feathers, punishing the animal kingdom in the process.

Banned book of the day is "And Tango Makes Three" by Justin Richardson and Peter Parnell.

With its true story of 2 male penguins raising a baby, it's been targeted for years. But we @PENamerica are seeing an uptick in efforts to ban it across FL… #FreeTheBooks pic.twitter.com/YYkAB4mZYm

2. Even adults have helicopter parents

This fall, a parent complained to Valdosta State University’s Dean Pierre-Richard Cornely that a biology professor’s lecture on gender was “that woke [expletive]”. In response, the dean of the Georgia university ordered the professor to alter her lesson or be reassigned – to allay the anxieties of one parent about their adult child.

3. Texas college president tries to fire a professor in Illinois

It’s unfortunately not unusual for professors to come under fire for their speech in their own workplace, either from students, peers, or administrators. What IS unusual is for a college president to advocate for the firing of a professor – especially one based in another state. That’s what happened to Loyola University of Chicago professor Benjamin H. Johnson this year, when Neil Matkin, the president of Collin College in Texas, tried to get him fired for starting a petition in support of a fired Collin professor.

4. A ban on books not in schools anyway

How queer does a book need to be before it’s banned? In response to a proposed bill that did not ultimately pass, district officials in Collierville, Tennessee, this year prepared to implement a series of “tiers” for books that include LGBTQ+ content: from Tier 1, which would have included books that mention gayness or have ancillary characters who identify as LGBTQ+, to Tier 4, which would have included guides to understanding your own gender or sexuality and sexual assault prevention. Tier 5 books would have been completely banned…presumably for being too gay.

In 2022, 140 new educational gag order bills were introduced, and many would allow parents and local citizens to sue the school for damages if they taught certain concepts. We’ve read all of these bills, and one stands out as especially absurd: Kentucky’s HB 706. Like other bills across the country, it would have prohibited instruction of what it calls “critical social justice theory” and other “divisive” instruction related to equity and inclusion. What sets it apart is that this bill would have allowed not only parents and local citizens to sue, but also “foreign business entities” registered in the state. Thankfully, the bill did not pass.

In an August report on compliance with the state’s educational gag order, the South Dakota Department of Education deleted a directive from its teacher education curriculum that students in its required Indian Studies course be made aware of “race and gender bias, stereotyping, [and] assumptions.” The change applies to all public and private colleges in the state, including tribal colleges run by Indian nations. So that there could be no mistaking their intent, the report authors included a scan of the curriculum with the requirement actually crossed out in pen.

Sex education has become a focus of school board meetings across the country. One board, in Miami-Dade County, Florida, went so far as to ban the district’s textbooks just before the start of the school year, because they had information on abortion, contraception, and gender identity. After a public outcry, the district un-banned the books within a week.

A school in Oklahoma was punished for violating the state’s educational gag order this year, based on testimony that the verbal instruction at a training differed from what was on the approved slide presentation. This resulted in an accreditation penalty from the State Board of Education and contributed to a significant chilling effect for teachers. The problem? Audio evidence proves that the spoken training was identical to the written slides, and state officials even acknowledged as much. The State Board of Education nonetheless refused to lessen the penalty.

10. Assistant principal fired for reading a book about butts

In Hinds County, Mississippi, Assistant Principal Toby Price read the book I Need a New Butt, by Dawn McMillan, to a group of 2nd grade students on Zoom. Two days later, he was terminated. Price challenged his dismissal, but the school board upheld the firing on a 2-1 vote, with two board members abstaining.

11. Utah agency compares learning about “questionable content” to falling off a cliff

The Utah Legislative Auditor General released a report this year on K-12 curricula as a means of monitoring compliance with Utah’s censorious curricular policies. One graphic in the report shows a fence at the top of a cliff, with a stretcher and ambulance at the bottom – apparently to justify interventions to screen curricula, in an effort to “protect” students from “divisive concepts” that might harm them, much like falling down a cliff. We hope the fence is strong enough to protect students from absurd visual representations, too. 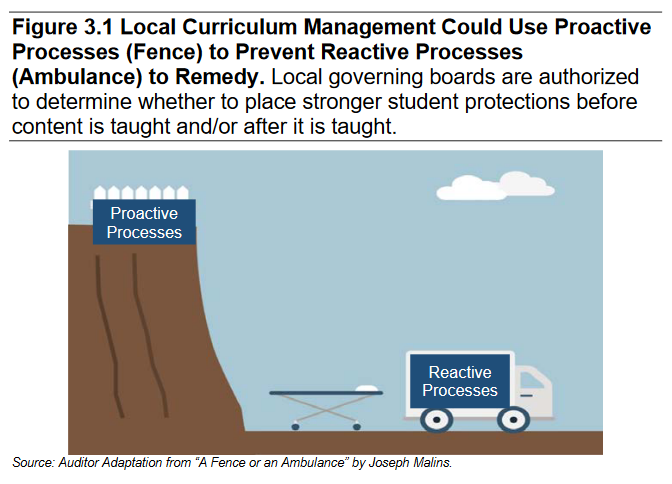 No book should be banned, but some objections fly not only in the face of literacy and good sense, but historical accuracy. That was the case in Missouri this fall, where close to 300 titles were temporarily or permanently banned out of fear that they might run afoul of a new law, SB 775. In Wentzville School District alone, more than 200 books were put in storage, including books introducing students to how to paint with oils, and, perhaps most bafflingly, an illustrated adaptation of the Gettysburg Address. After PEN America and 27 authors and illustrators issued an open letter condemning the bans, the majority of the books in Wentzville went back on shelves, including the graphic depiction of Lincoln’s most famous words.

Educational gag orders like Florida’s HB 7 are having disastrous consequences on public education, and guidance from colleges occasionally shifts from the horrifying to the absurd. That was the case with North Florida College, which interpreted the state’s gag order to mean that any discussion of the Civil Rights movement might violate the law unless an explicit disclaimer was given. They advised faculty to remind students that the school doesn’t necessarily support views aired during the March on Washington, for example, and told professors it’s illegal to say that white people were responsible for Jim Crow laws. And before starting a student discussion, professors were encouraged to tell their students that “the opinions stated by your fellow students do not reflect those of the College.” 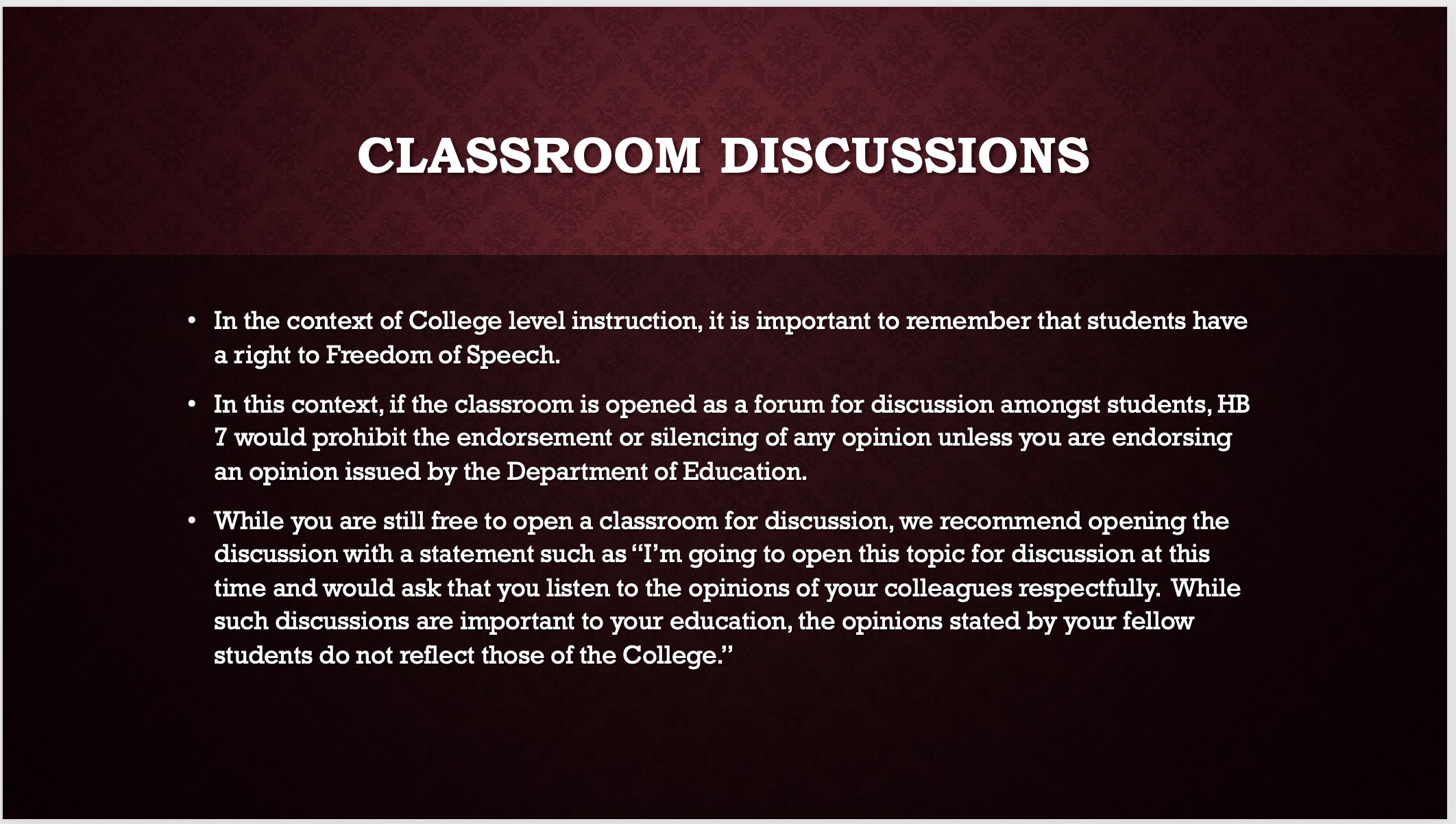 14. Principal reads book, decides it’s OK for others to read too

Ok, we admit this story is not one of censorship; but why not end the list on a positive note? After a year in which school officials and boards have been banning books without reading them, it was refreshing to read this story from New Hampshire, where a principal who read Gender Queer: A Memoir over a weekend decided it could remain in their high school library. Maia Kobabe’s graphic novel memoir was the most banned book in the last school year, and it continues to be targeted in schools and libraries. Yet when people read it cover to cover, they recognize the power of the story and decide to retain it. Someone should tell this to the new state commission tasked with reviewing books in Tennessee, some of whose members have been advocating that they should not have to read books before they ban them.