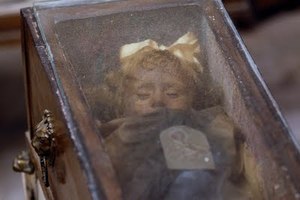 This piece was submitted by Laird Hunt as part of the 2014 PEN World Voices Online Anthology.

At the United Nations, identity cards, most generally strung on cheap beaded chains, were worn around the neck. The cards were made by UN security guards at a facility across the street from the main complex. If the guard taking your photograph was nice, he or she would let you see the picture before hitting print. Most of my pictures were pretty good. During the 5 years I worked at the United Nations, I accumulated a considerable number of these cards. I still have most of them. In a plastic bag somewhere in the basement.

I don’t know if one was required to wear identity cards at the CIA. When one was at headquarters in Langley, Virginia, I mean.

Obviously a CIA officer, in the field, would not have worn an identity card.

A low-level United Nations employee, on duty, in the field, did though.

When I was sent to cover the signing of the Convention Against Transnational Organized Crime, in Palermo, I wore my identity card as I walked down the middle of the main thoroughfares, which had been fenced off for the occasion. There we went, alone or in groups, down the empty streets.

I liked to walk down the empty streets. Much of the coverage I was doing was of a subsidiary committee meeting in a 12th century Norman palace on the far side of town. The walk took around half an hour. There were parks to negotiate as well as the empty streets. Light came through the trees and children played on the swept gravel. Away from the town center life went on uninterrupted. I would leave my hotel early so I could take my time. On the return though, when I had reentered the town center and was walking along the blocked-off avenues, I felt the urge to hurry, to look purposive. Back at the hotel I would ring up to my colleague’s room and see if he wanted to come down to the little bar for a drink. Usually he was there and did. We drank Campari without soda or lemon or we drank under-chilled Italian beer. The lobby around us swarmed with armed policemen. Some carried machine guns. They were a gregarious bunch. Young and rather bored, now that the whole thing was underway and no one was being killed.

Not yet, we thought.

In the evenings the streets were opened up again and the cars went rushing along and we took off our identity cards and our ties and went out to look around.

I never went to CIA headquarters in Langley, Virigina, for the final stage of the year-long hiring process that would likely have made me an intelligence officer for the Agency. All that remained, after the series of tests I had taken and interviews I had undergone, was to visit Langley and submit myself to a physical exam and a lie-detector test. I reached the stage in the proceedings where a young woman called me to make arrangements for my visit. That in the end I chose not to undertake the voyage laid out for me was looked upon philosophically by my deep-voiced recruiting contact. “All right, Mr. Hunt,” he said. He gave me a number, in the eventuality that I changed my mind, and bid me farewell and good luck in Japan (where I had decided to spend a year teaching English).

The CIA invited me, when I was a senior at Indiana University, to take a series of aptitude tests that would help them to determine whether, as my profile indicated, I was suitable Agency material. Apparently, a chipper high-voiced CIA recruitment officer told me in a dingy hotel room in Indianapolis after I had gone through the aptitude tests, I was. And how. She was, she told me, honestly impressed. In light of my success on the exams, the Agency had every reason to think I would make a very, very good CIA officer. One who would work in the field.

I have always liked to read.

When I was on mission in Palermo I was reading a novel by Jane Bowles. I had been prepped to find this novel by Jane Bowles the most brilliant thing that anyone had ever written. As it occurred though I spent a good deal of the time I was reading this novel by Jane Bowles thinking of the writing of her one time husband Paul Bowles, whose work had moved me deeply some years before. Reading that novel by Jane Bowles, I found myself rebelling against the narrative (think Zelda Fitzgerald) of the overlooked but far more brilliant spouse of the famous writer. I had sympathy for this narrative and had read my sympathy into the work of certain writers who fit this category in the past with the result that I had perhaps given the fruit of their labors more than its due, but there, in Palermo, I found the narrative ringing a little hollow, found it a little forced. Regardless, I had a nice bright top floor hotel room with a balcony that gave me a view of the rooftops of Palermo and during my spare moments, when I needed to catch my breath, I read this novel by Jane Bowles and afterward, when I went out walking, or just went down to the lobby for another Campari, which in addition to lacking soda and lemon was presented without ice, some of what Bowles was describing in her novel got thrown out into the world around me, that texture of a world that was not the world.

A kind of ectoplasm stuck to walls and barstools.

One of the policemen with a machine gun told me I ought to go and see the Capuchin Catacombs if I had some spare time. That if I was really interested in seeing something special I ought to go there. I told him I had been to the catacombs in Paris and seen the skulls and bones piled up to the ceiling but he just smiled and said the two catacombs could not be compared.

We had received some tips from more experienced colleagues on where, in the evening, to get a nice glass of dark Sicilian wine and where to get some nice rich Sicilian sausage. To get to this place, quite popular with the chic set of Palermo, we had to walk down narrow winding streets in the dusk light. We did not wear our United Nations identity cards on this walk and on the others we took. As I have already mentioned. There were rumors going around the UN staff that the Casa Nostra had it in mind to shoot some of us. So the idea was that we shouldn’t, when we were off duty, draw any particular attention to ourselves, even if we had spent much of the day doing just that.

Palermo seemed to be crumbling. The facades of many buildings were dark from soot. Others were being knocked down. I found a number of pieces of handsome tile in a dumpster. I wrapped them in a napkin and put them in the pocket of my jacket. I still have them. I also still have one of the two hand-painted espresso cups I got at a pottery store on my last day. The Guayanese colleague I went around with in Palermo, for his part, bought himself “a nice piece of leather.” It did not look so very nice to me, but then perhaps my espresso cups and jar of Sicilian marmalade and tiles plucked from a dumpster had not impressed him, so I said nothing but agreable things when he asked my opinion.

Not long ago I saw a movie where an outwardly mild-mannered CIA employee brutally stabs someone in the stomach on a dark, winding street much like the ones we negotiated to reach our wine bar that night in Palermo. He stabs the person and drops the knife and walks on.

I got my job at the UN through a friend of a friend. That friend of a friend became a kind of friend in his own right but then he left the UN and I lost touch with him. Our office was just outside the Security Council. Every morning I went up the escalator and got a view of Picasso’s Guernica tapestry.

There were those who thought, when I was working at the United Nations, that I was actually working for the CIA. The poet Bernadette Mayer was one of these people. It was sort of a joke, but it was a joke that went on for some years.

I was another of these people. I mean at moments.

Walking down the darkening, narrow street in Palermo with my identity card tucked into my pocket, a French Canadian and Guyanese colleague on either side of me, was one of these moments. I had grown a goatee for the trip and someone, looking at me, had said my goatee looked like a disguise.

No one got shot during that mission. The Convention against Transnational Organized Crime got signed. I had my drink with my colleagues at the wine bar. I bought some souvenirs. I never joined the CIA. The young French Canadian woman stayed on at the UN and was later crushed to death in a stairwell in Haiti. I went home.

This story, such as it is, ends in the famous Capuchin catacombs beneath the streets of Palermo where (as the machine-gun toting policeman had told me) for two hundred years the wealthy dead of the city were set on display. They are, most of them, still there. In their crepe dresses, in their purple velvet pants, in their priestly robes. Rosalia Lombardo, who died at age two on 6 December 1920 and was one of the last corpses to be interred in the catacombs before the local authorities banned the practice, can be found tucked into a little bed. Nicknamed the ‘Sleeping Beauty’, Rosalia’s body is still perfectly intact. Embalmed by a certain Alfredo Salafia, she is in a glass case, looking very much like a surreal doll. There is also a baby lying nearby on a yellow blanket. The baby does not look like a doll.

Recently I read Giuseppe di Lampedusa’s great novel of Sicily, The Leopard, which is partially set in Palermo. Nowhere in the novel, written half a century after the events it treats, are the catacombs mentioned, although the 19th century would have been their heyday. Dust on the other hand, is everywhere in the novel, dust and smoke and ash.

This story was previously published in Western Humanities Review.