“The ongoing crackdown on civil society is truly unprecedented” 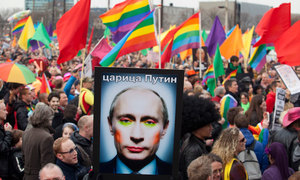 On 12 December, 2013, in his address to the nation for the 20th anniversary of Russia’s Constitution, President Putin specifically emphasized the value of traditions and noted that, ‘destruction of traditional values… not only entails negative consequences for society, but is also inherently anti-democratic because it is based on an abstract notion and runs counter to the will of the majority of people’. Putin’s zeal in asserting ‘traditional values’ appears partly aimed at justifying the infamous ban on ‘propaganda of non-traditional sexual relations’ in Russia—a law that blatantly discriminates against lesbian, gay, bisexual or transgender (LGBT) people and which, accompanied by an increase in homophobic violence, has caused significant damage to Russia’s international prestige.

Putin’s agenda, however, is broader than that. The Russian leadership is using ‘traditional values’ to consolidate a conservative support base and to channel growing public discontent away from the government and towards specially designated enemies. Frightened by the massive public protests of the two previous years, the Kremlin is presently attempting to reassert itself by constructing and upholding an ideological dichotomy of ‘traditional’ versus ‘non-traditional’, ‘Russian proper’ versus ‘external and alien’. Given these circumstances, it is no wonder that the law, which came to be widely known as a ban on ‘homosexual propaganda’, is worded as prohibiting ‘propaganda of non-traditional sexual relations’. It is also no wonder that the key ‘enemies’ of Russian traditions (as designated by the Kremlin) are critical to the government and advocate universal values and the rights of LGBT people and migrants.

Human Rights Watch opened a bureau in Russia over 20 years ago, soon after the disintegration of the Soviet Union. We’ve been watching human rights developments very closely during all these years and can say without a shadow of a doubt that the ongoing crackdown on civil society is truly unprecedented. Today is the worst period for human rights in Russia since the Soviet Union collapsed.

At the core of Russia’s crackdown is the so called law on ‘foreign agents’, rammed through Parliament just months after Vladimir Putin’s return to the Kremlin in 2012. This law requires Russian non-governmental organizations (NGOs) that engage in very broadly defined ‘political activity’ and accept foreign funding to register as ‘foreign agents’. What’s so awful about this? First and foremost, in the Russian language, the term ‘foreign agent’ is synonymous with foreign spy or traitor. The term goes back to the Cold War and clearly is meant to marginalize and demonize independent groups and portray them as enemies of the Russian people or a kind of alien force out to destroy Russia.

You may think that the law only applies to organizations that actively engage in ‘politics’ and that it’s probably not a good idea for NGOs to promote candidates and political parties in elections while using funds from foreign sources… Sorry, but this is not the case: under the law on ‘foreign agents’, any NGO activity aimed at influencing public opinion and seeking governmental policy changes qualifies as political. In practice the law applies to virtually all advocacy groups.

Beginning in March 2013, after human rights groups and other NGOs made it clear they would not comply with the registration requirement, Russian authorities launched a punitive inspection campaign to identify these so called ‘foreign agents’. According to Russia’s prosecutor general’s office, which led the inspection campaign, over 1,000 NGOs throughout the country were scrutinized. Dozens of groups received warnings or direct orders from the prosecutors to register as ‘foreign agents.’ Failure to abide by official orders could result in the organizations’ suspension and their leaders’ imprisonment for up to two years.

The Ministry for Justice has already suspended the activities of two election watchdog groups from the Golos network. At least three NGOs chose to wind up operations to avoid further repressive legal action. Many others have been fighting the prosecutors through the courts for months. In some cases they have been successful but prosecutors are now seeking other legal avenues to harass them for failing to register. These are battles that Russian groups shouldn’t have to face. Every such court case takes time and resources away from victims of abuses who really need their help.

So far Russia’s independent organizations have not buckled under tremendous government pressure – but sustained international engagement with the Kremlin, including urging to them to repeal the ‘foreign agents’ provisions, is crucial to their survival.

Along with trying to silence critical voices and portray rights groups as paid agents of foreign influence, the authorities launched another massive campaign: a country-wide operation aimed at irregular [or ‘undocumented’] migrants. Starting in July this year, police in large Russian cities, including Sochi, where construction for the Olympics is in progress, have begun rounding up thousands of people based on little more than their non-Slavic appearance. Some are released later, after having spent hours or days in detention without access to legal counsel. Others get expelled after prolonged detention, following rubber-stamp court rulings and often without getting paid for their work.

With anti-migrant raids sweeping the country, high-level officials engage in viciously xenophobic rhetoric, accusing migrants (whether they have residence permits or not) of being too visible, flaunting their ‘alien’ ways, perpetrating crimes and taking jobs away from local residents. In October, when an angry crowd attacked a wholesale vegetable market on the outskirts of Moscow, where many of the stallholders are migrants, instead of acting to protect the migrants working there, the police began rounding them up, supposedly for their own safety. In the first three months after the start of the anti-migrant campaign, Human Rights Watch received a report from a local expert group monitoring xenophobic violence of a more than 40 percent increase in xenophobic hate crime across Russia.

There is a clear parallel with the campaign against LGBT people, as the adoption of the ‘homosexual propaganda’ ban was accompanied by aggressive homophobic rhetoric in the media, including by officials, and an increase in the number of attacks against gay people and harassment of LGBT activists.

Recent polling data showed a significant rise in homophobic sentiment in Russia in 2013. Vigilante groups, espousing radical nationalist views, have emerged across the country, luring men or boys to meetings, accusing them of being gay, humiliating and beating them, and posting videos of the proceedings on social media. A few criminal investigations have been launched into these incidents, but have not yet resulted in effective prosecution.

This month, one of my colleagues documented a case in Siberia where a group of ultra-nationalists beat up a gay man in the street simply because of his flamboyant dress. Passers-by looked on without interfering while the perpetrators screamed that they were punishing a ‘faggot.’ The police are reluctant to investigate such crimes. On the rare occasions when investigations are launched, the deeds are commonly qualified as acts of hooliganism, not hate crimes.

The law banning ‘propaganda of non-traditional sexual relations’ essentially prohibits any positive information or communication about LGBT issues when children are present. Allegedly aimed at protecting children, the law cynically puts homosexuality in the same basket as paedophilia. Also in June, the Russian parliament passed a law banning adoption of Russian children by foreign same-sex couples and by unmarried individuals from countries where marriage for same-sex couples is legal. In September, a bill that would make a parent’s homosexuality legal grounds for denial of parental rights was tabled at the State Duma by a group of deputies from the ruling party. It was later withdrawn for ‘revision’ but there are strong grounds to expect that it will be tabled again after the Olympic Games in Sochi are over, if international scrutiny of Russia weakens even slightly.

When thinking about where Russia stands today, I cannot help but think of a friend of mine and his personal story. The man grew up in a small Soviet town and realized he was gay by the age of 15. He did not even know the term since, in his words, ‘in the Soviet Union “homosexualism” didn’t exist’ but he could no longer deny that he was sexually attracted to boys, not girls. So, he went to see an elderly doctor at the local out-patient clinic. The doctor sighed and said, ‘Take a lot of vitamin C and hopefully it’ll get better with time… But most importantly, don’t ever mention this to anyone’. Homosexuality was punishable by a hefty jail term at the time, and by telling his teenage patient to keep mum the doctor was actually trying to protect him.

When my friend shared this anecdote with me he was in his early fifties. We had a good laugh, agreeing that although things weren’t easy for gay people in Russia, at least things had changed so you didn’t have to stay shut in that closet for life. But now, 40 years later, this is precisely where the Kremlin wants gay people to stay: in the closet. And those who dare speak out—be it about their sexual identity or their discontent with governmental policies—are threatened with punishment and blackened in the eyes of society. This is what lies behind the superficially respectable veil of ‘traditional values’ that the Kremlin is throwing over Russia today.