A Different Kind of Book Prize 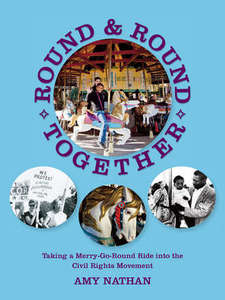 There are all kinds of honors books can receive—literary prizes, good sales rankings on Amazon, starred reviews. Those are all very nice. But for me, one of the greatest honors I’ve had as an author came this summer when I had the privilege of taking part in a huge festival in Baltimore whose spirit and message mirrored the spirit and message described in my book, Round and Round Together.

Round and Round Together (a book for teens and adults) chronicles the long path that led to a remarkable coming together in Baltimore fifty years ago, when hundreds of people reached across the great divides that separate us—racial, religious, generational, economic, and philosophical. Despite their differences, they worked together back then to bring about change and try to heal the community. They were determined to end segregation at a prominent Baltimore symbol of Jim Crow, the area’s most popular amusement park, Gwynn Oak. They achieved this by taking part in two huge nonviolent demonstrations at the park on July 4 and 7, 1963, during which nearly 400 demonstrators were arrested: black and white, young and old. Among those arrested were more than two dozen clergy—Catholic, Protestant, and Jewish—a first for the Civil Rights movement. These two protests led to serious negotiations and a new era at that amusement park, which agreed to drop Jim Crow at last on August 28, 1963, the same day as the March on Washington for Jobs and Freedom.

The festival that I participated in this summer took place on July 7th, the 50th anniversary of the second of those two demonstrations. This summer’s event brought together a similarly diverse crowd of hundreds of people, who came to the site of the old amusement park, which closed in 1972, and is now a Baltimore County recreation area. Quite a few at this summer’s gathering were veterans of the 1963 protests. Many others hadn’t been born yet when those veterans were at Gwynn Oak, walking picket lines and getting hauled away in police vans to be arrested.

This summer’s crowd came to the park on a sweltering hot day not only to commemorate the Civil Rights milestone that those 1963 protests achieved. Many came also to celebrate the spirit of coming together that occurred there fifty years ago—and to spark its rebirth. Working together despite differences, reaching across divides, compromising for the greater good—those ways of interacting have grown a bit rusty in recent years. This summer’s gathering aimed to give such an approach a jumpstart, to try once again to heal the community and bridge the gaps that persist.

The festival’s name— “Opening the Gates”—helped make clear that goal. The event was organized by an interracial committee of local interfaith, community, and Civil Rights groups, much as the 1963 protests were. A big difference this time, however, was the active participation in the planning process of officials from Baltimore County government. Another difference was that the co-chairs of the event—Rabbi Gila Ruskin and local TV news photographer Pete O’Neal—weren’t long-time Civil Rights activists. They were Baltimoreans who were concerned about the fissures they saw in their community and wanted to try to bring together people who often didn’t have much contact, to open lanes of communication. The committee’s goal, as stated in its mission statement: “We honor the courageous acts of those who struggled for Civil Rights in Maryland, and especially those who in 1963 actively pursued and achieved the desegregation of Gwynn Oak Amusement Park. Let us all work together to keep the gates of communication, cooperation, and community open.”

I was proud to be a member of the organizing committee and to take part in the planning, including helping to write the text for an historical marker that was dedicated at the park during this summer’s festival. My book had helped inspire Baltimore County officials to obtain a grant to create that historical marker, which then led to them joining forces with the organizing committee and offering invaluable logistical support for the event.

Serving on the committee itself involved a kind of mirroring of the events of fifty years ago, not only in the diversity of the committee, but also in the impromptu learning-as-you-go, seeing-what-works nature of the planning. Most of the committee members had never organized a big community festival before. Right up until the end, it wasn’t clear that we would really be able to bring it off. That was true back in 1963, too. Most of those planning the 1963 demonstrations had never organized civil disobedience protests on such a massive scale. On-the-job learning was a common feature of the Civil Rights movement as a whole, as noted in my book. Dedicated Civil Rights volunteers all over the country, who had never organized a protest movement before, ended up doing a terrific job, “making it up as they went,” as one Civil Rights veteran told me.

The program at this summer’s Opening the Gates festival was a model of inclusiveness, with Klezmer bands, gospel choirs, a labor union chorus, a Motown review, griot storytellers, dance troupes, and blessings from Catholic, Protestant, Muslim, and Jewish clergy. There was even a speech by a representative from the Indian Embassy, which had played a part in the Gwynn Oak story back in the early ‘60s. There were food vendors, midway games, classic cars on view, displays about the Tuskegee Airmen and Negro Baseball League, and tables filled with Gwynn Oak Amusement Park memorabilia.

Veterans of the 1963 protests spoke. So did Sharon Langley, now a Los Angeles elementary school administrator, who as a very young child made news in August 1963 when she was the first African American child to go on a ride on the park’s first day post-Jim Crow, a story that’s an important part of my book.

Baltimore County’s executive, Kevin Kamenetz, spoke and led the crowd in singing “We Shall Overcome” as they marched from the performance area at the edge of a grassy field, up a small hill near the park’s entrance, to dedicate the historical marker.

I spent most of the day at a book table, giving away 250 copies of Round and Round Together free of charge, thanks to a generous donation from J.P. Grant, a local businessman. He made this donation in memory of his mother, Mabel Grant Young, who had played a role in helping to end segregation at Gwynn Oak.

Those 250 copies were snapped up quickly, not just because they were free. People seemed eager to have an account of the events of fifty years ago that they could take home with them, that would help them learn more about what had happened. It was moving to hear the stories of people who stopped by the book table to talk about their memories of taking part in the protests, or about their experiences going to Gwynn Oak after it integrated, or to share stories they’d heard about Gwynn Oak from parents, relatives, and friends. It was especially moving to see youngsters who wanted their own copy of the book. Also encouraging was meeting folks who acknowledged that in 1963 they had wanted the amusement park to stay “whites only,” but had since realized that dropping Jim Crow was the moral thing to do. They had come to affirm that people can change.

It’s unlikely that this one Festival will do much to moderate the general tone of community-wide interaction, but it clearly gave the hundreds of people who attended—me included—a feeling that we’re not alone in wanting change and healing and a return to a commitment to reaching out. What an honor that my little book played a part in giving people this sense of possibility.