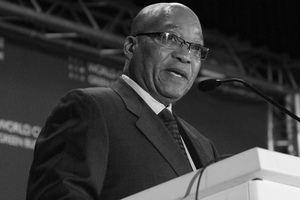 We’re excited to hear the good news that South Africa’s President Jacob Zuma has refused to sign the controversial Protection of State Information Bill and instead referred it back to Parliament for revision. The so-called Secrecy Bill would have imposed substantial fines and prison sentences for legitimate investigative work by journalists and was staunchly opposed by South African PEN and civil society groups.

The Bill, after many amendments, was passed by both Houses of Parliament and merely required President Zuma’s signature for it to become law. But President Zuma has now referred the legislation back to parliament for further review on the ground that it is unconstitutional.

The South African National Editors’ Forum (SANEF), a leading press association, also strongly objected to the most recent formulation of the bill, according to Louw:

The media whose views were expressed by Sanef said it welcomed President Zuma’s decision and would lend help in trying to craft acceptable legislation. Sanef had claimed that the Bill was unconstitutional and that if the President signed it into law it would refer the bill to the Constitutional Court to seek a ruling that it was unconstitutional. In the last month Sanef collaborated with representatives of the national publishers’ body in sending a letter to President Zuma urging him to refer the legislation back to parliament for review.

PEN American Center joined South African PEN on a brief to the United Nations Human Rights Council in 2011 that expressed opposition to the Secrecy Bill as well as a host of other laws and policies, such as the proposed creation of a Media Appeals Tribunal that would have imposed prior restraint on publishers. Since that time, we jointly launched an exciting international exchange with South African writers, who came to the PEN World Voices Festival of International Literature in May 2013 to discuss free expression issues. PEN American Center, with support from the Jerome L. Greene Foundation, is now working closely with South African PEN to support an ambitious new programming cycle in 2013 and 2014 that will feature public dialogues on literacy, new strategic initiatives, and expanded advocacy to support literature and free expression advocacy.

Our exchange work with South African PEN is especially relevant in light of revelations about the National Security Agency’s PRISM program here in the United States. As in South Africa, PEN American Center is seeking to protect whistleblowers and journalists who are conducting legitimate investigative work and who may be monitored or threatened under the guise of national security. The successful campaigning by South African civil society groups may hold important lessons for activists and writers in the U.S. and around the world.