The Answer is the Same, Sir 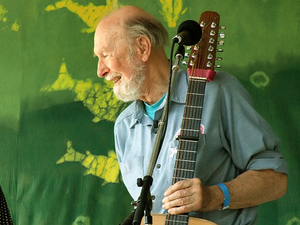 Pete Seeger, best known as a popular folk singer who inspired musicians spanning the generations from Bob Dylan and Emmylou Harris to Bruce Springsteen and Ben Harper, passed away Monday at New York Presbyterian Hospital at the age of 94.

Here at PEN, Seeger was viewed as much more than a folksy singer-songwriter. He embodied the notion that music, art, and freedom to express oneself could be catalysts for positive social change, cross-cultural communication, and international peace. Together with his band, The Weavers, he transformed traditional songs from Cuba (“Guantanamera”), South Africa (“Wimoweh”), and Israel (“Tzena, Tzena, Tzena”) into worldwide favorites still sung in homes across the globe today. Rolling Stone notes that Seeger and the Weavers, “in their way, invented world music.” His most famous song, adapted from Bible verses, became the Byrds’ number one hit “Turn, Turn, Turn” in 1965.

Throughout his long career, Seeger used his music and his stature as a performing artist as tools to protest issues he felt were unjust, from the anti-communist movement in the 1950s to the Vietnam War; he even appeared at Occupy Wall Street in 2011.

A soldier during World War II, Seeger wrote and performed “Wasn’t That a Time,” a song protesting McCarthyism as an insult to Americans who had given their lives for freedom:

And now again the madmen come,
And should our vic’try fail?
There is no vic’try in a land
Where free men go to jail.

In 1955, Seeger was called before the House Un-American Activities Committee to explain, among other things, an advertisement for his performance that appeared in the Daily Worker, the official newspaper of the American Communist Party.  “Sir,” said Seeger, “I refuse to answer that question whether it was a quote from the New York Times or the Vegetarian Journal.”

When questioned about the politics of his audience, Seeger repeatedly refused to answer and insisted that he would only answer questions about his music: “I have sung for Americans of every political persuasion, and I am proud that I never refuse to sing to an audience, no matter what religion or color of their skin, or situation in life. I have sung in hobo jungles, and I have sung for the Rockefellers, and I am proud that I have never refused to sing for anybody. That is the only answer I can give along that line.”  From that point on, Seeger’s only response to the committee’s questions was, “The answer is the same, sir.”