Writing About Children and War 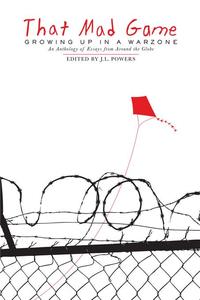 Something we often forget when we talk about war is how it affects not just the current reality but reality from then on. Wherever it goes, and whatever it touches, it permanently poisons.

Since children are the most vulnerable citizens of any society, it seems rather obvious that they are the citizens most likely to be negatively affected by war. Until very recently, however, the world has paid scant attention to what happens to children in war.

It is for this reason that, together with my publisher Cinco Puntos Press, I decided to edit an anthology of memoir essays by people who came of age during a time of war: That Mad Game: Growing Up in a Warzone, an anthology of essays from around the world (Sept 2012).

On March 7, 2013, I hosted a panel on children’s experiences in conflict zones in Boston, Massachusetts at the Association of Writing Program’s annual conference. Four of the anthology’s writers participated on the panel: Aria Minu-Sepehr, whose family fled Iran after the 1979 Revolution; Marnie Mueller, born in a Japanese internment camp here in the United States during the Second World War, to white activist parents; Peauladd Huy, who survived the Khmer Rouge regime of terror in Cambodia; and David Griffith, who experienced war vicariously as a teenager growing up in the U.S. during the highly televised Gulf War.

I wasn’t taking extensive notes, since I was listening to the writers speak, so this is just a smattering, a small taste, of the things the writers revealed during the course of the panel. Marnie Mueller’s responses happened to be written out so I have more extensive quotes from her than the others.

J.L. Powers: Charles London, author of One Day the Soldiers Came: Voices of Children in War, points out that there have been 14,000 wars in the last 5600 years, and at least 160 wars since 1945. Currently, approximately 1 billion children under the age of 18 are growing up in regions affected by conflict. Children are far more likely to experience war at some point during their childhood than they are to grow up without it. Since this is the case, why have writers been so reluctant to address the experience in literature, particularly in non-fiction and memoir?

Peauladd Huy: In my case, in Cambodia, our elders told us to forget, that we have to move on. So I tried to forget. It wasn’t until I had children and they asked me about their grandparents that I had to start thinking about it again.

David Griffith: Many of us wish to forget… and writing is a way to not forget.

Marnie Mueller: Children feel unconsciously tainted, a shame at being victims. This is carried into adulthood. I once heard the story of a Nisei woman who had been in a camp as a young teen. When she went back to the university as a 50-year-old woman, she was asked by her sociology professor if she would be willing to write about her experience in camp. She thought it would be easy, having remembered the experience as non-traumatic once they’d arrived in the camp. “I began to write the essay,” she said, “but as the days went on I had a harder and harder time with it.” At this point she began to choke up. Her husband, a Caucasian man, stepped in to help. “She would be up all night writing, trying to find a way to tell her story. It was very painful to witness, but finally she completed the assignment.” By now the woman had collected herself and could continue. “Yes, I did,” she said, “but in the process all my hair fell out.”

Powers: In my introduction, I state that, “war occurs because of the stories we tell ourselves about the world we live in or the world we want to live in.” By this, I mean that narratives serve to justify and perpetuate war. For example, during the Rwandan genocide, a million people were hacked to death in ten days because Hutu militants were widely disseminating a story about how the Hutu had long been oppressed by the Tutsi. Tens of thousands of ordinary citizens took the narrative to heart and participated in the killings. What are the stories that shaped the war you experienced as a child (even if that war was from a distance, as in David’s case)? How did those stories shape you?

Minu-Sepehr: The Iranian Revolution was a test case for this war of narratives. In many ways, what the Shah lost was a PR war.

Griffith: What was amazing was what didn’t get said, what didn’t get talked about. My teachers in high school didn’t talk about the Gulf War. She didn’t pull down a map and show us where the war was taking place.

Mueller: Conflicting story lines were the various reasons given for the incarceration of Japanese Americans. In one version it was said that they were sent to internment camps to protect the country from their possible treasonous acts during the war. Another version said they were interned to protect them from possible violent acts of Caucasian Americans. What this taught me was to be skeptical of the actions of government, despite their fine rhetoric, and to be suspicious of extreme nationalism and patriotism, in any guise.

Powers: A collective theme I noticed in just about every essay I read, including those that didn’t end up in the anthology, was the experience of exile. Every writer felt the bitter pang of exile—exile from home, country, family, or, in some cases, his or her remembered self. Can you talk about this apparently universal experience of war? Are there ways to move past the feeling of exile and into a feeling of belonging once again to a community?

Minu-Sepehr: My parents have kept everything exactly like it was in the 1970s, such as food, dress, music, even Persian rugs. It’s as if the world stopped at that time and nothing has changed. Also, this question of exile is passed down to the next generation, which doesn’t even experience exile. I’ve noticed it even in my daughter when we moved from Pennsylvania to Oregon. She was moving from one place in the country to another—and yet her experience of it was bitter beyond what it should have been.

Huy: I feel a deep nostalgia for what I never had. It feels like I’m missing a stage in my life. My parents are—[PAUSE]. You see, I even use the present tense to talk about my parents. It’s hard for me to talk in the past tense about my experiences or the people I lost. It’s still real.

Mueller: I find myself attracted to people who grew up on the wrong side of history, people who feel they don’t fully belong in their country of choice, nor in their country of birth. I can never feel like a patriotic or flag-waving American. In the anthology piece, I wrote, “As with 120,000 people of Japanese heritage, I too had gone from one America into another, a displaced person in my own land. This isn’t to say that people don’t carry on, that they sit around depressed about the old wounds. On the contrary, those who have gone through war traumas often work harder to make a good life to compensate for the sadness and devastation they’ve seen. They work hard at putting bad experience behind them.”

J.L. Powers is the award-winning author of This Thing Called the Future (2011), a coming-of-age novel set in post-apartheid South Africa, and editor of That Mad Game: Growing up in a Warzone (2012). That Mad Game was recently chosen for the 2013 IRA Notable Books for a Global Society list and for a Skipping Stones Honor Award. Her forthcoming novel, Amina, about a girl graffiti artist growing up in Mogadishu, Somalia, will be published by Australia’s Allen & Unwin as part of their series on children and war, Through My Eyes. She blogs at www.jlpowers.net and reviews books for The Pirate Tree.