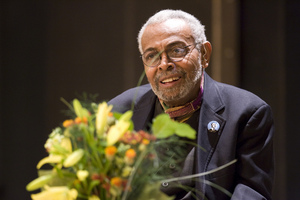 Amiri Baraka, a poet and playwright of pulsating rage, whose long illumination of the black experience in America was called incandescent in some quarters and incendiary in others, died on Thursday in Newark. He was 79.

Baraka was famous as one of the major forces in the Black Arts movement of the 1960s and ‘70s, which sought to duplicate in fiction, poetry, drama, and other mediums the aims of the black power movement in the political arena.

Among his best-known works are the poetry collections The Dead Lecturer and Transbluesency: The Selected Poetry of Amiri Baraka/LeRoi Jones, 1961-1995; the play Dutchman; and Blues People: Negro Music in White America, a highly regarded historical survey. Among his many awards are an Obie, an American Book Award, and a Langston Hughes award. In 2008 he received the PEN Open Book Award for Tales of the Out and the Gone.

In 1980 Mr. Baraka, who had renounced black nationalism as exclusionary and become, in his words, a “Marxist-Leninist-Maoist,” repudiated those views in an essay in The Village Voice titled “Confessions of a Former Anti-Semite.”

He came to renewed, unfavorable attention in 2002, when a poem he wrote about the Sept. 11 attacks, which contained lines widely seen as anti-Semitic, touched off a firestorm that resulted in the elimination of his post as New Jersey’s poet laureate.

But his champions and detractors agreed that at his finest he was a powerful voice on the printed page, a riveting orator in person and an enduring presence on the international literary scene whom—whether one loved or hated him—it was seldom possible to ignore.

Despite a half-century of accusations that he was a polarizing figure, Mr. Baraka described himself as an optimist, albeit one of a very particular sort.

“I’d say I’m a revolutionary optimist,” he told Newsday in 1990. “I believe that the good guys—the people—are going to win.

This post was partially excerpted from the New York Times article, “Amiri Baraka, Polarizing Poet and Playwright, Dies at 79.”