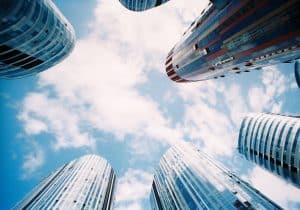 The following essay is taken from the third issue of PEN America’s translation magazine, Glossolalia, titled, We Agree on Nothing: New Writing from China. This piece, written by Chinese sci-fi writer Han Song, was translated for the magazine by Ken Liu. To read the full issue, purchase a print or digital edition.

As soon as he got home, Chen had the odd feeling that it no longer was his home. Some of the furniture was missing. He heard a woman’s voice. “Darling, where are you?” he called out, but he couldn’t see his wife. All he could hear were her giggles. His annoyance turned to fear. A ghost?

“I’m invisible,” said his wife’s voice. “This is the latest service offered by the beauty salons. Are you impressed?”

“Please, would you show yourself?” Chen’s voice trembled.

“But you are always annoyed to see me,” said his wife, laughing cruelly. “I thought you’d be happy! This treatment also helps maintain a sense of mystery, a good thing for a marriage.”

Chen had once heard scientists claim that in the future, humans would have to make themselves invisible to find happiness and dignity, but he could never have imagined that the prediction would come true overnight. He turned and fled his house, horrified.

The street had changed as well, though he hadn’t noticed it earlier. Some of the buildings were gone, and the sidewalks no longer as crowded. He bumped into something, but he saw nothing in his way. He heard angry curses, but he saw no one. He returned to his company, and the building looked different too. The lobby had four elevators, but only one was visible now, though he could still hear doors opening and closing and people getting on and off.

Back in his office, the only colleague he saw was Wang, even though words continued to appear one by one on the other computer monitors.

“Where are the rest of them?”

“It’s the result of collective will. Everyone has hoped to become invisible since the beginning of time.”

Wang and Chen continued to work alongside their invisible officemates as though nothing was wrong. When they went out to lunch, their food flickered in and out of existence. By the time they got back from lunch, their building was gone. Feeling around cautiously for the invisible walls and floors as though they were blind, they managed to get back to the office.

“These beauty salons are really something, aren’t they?” said Chen.

“I heard the technology was developed by a civil-military partnership, an instant success,” said Wang in a conspiratorial tone.

Well, it’s not as if I’ve ever seen the true appearance of this office, thought Chen. It’s the same with this city, with this whole country.

Wang explained to him that he was going to a beauty salon tomorrow to get the invisibility procedure. He was now bidding Chen farewell. “It’s impossible to continue to live as a visible man. The world is full of danger. Of course, some feel that invisibility makes life more convenient. For instance, Director Li takes bribes, and it’s obviously helpful if no one can see him. But I’m more spiritual, and life is about the pursuit of Emptiness and Nothingness. You get me?”

Oh, please, you’re just sick of pretending, thought Chen. What isn’t pretend? Everyone is wearing a mask. But now we can relax—though perhaps this is the biggest masquerade of all.

After work, he walked with Wang for a while to say goodbye. The pair walked through empty block after block, the only pedestrians in sight. Suddenly, an invisible prankster tripped him, and he fell to the ground. Blood poured from his wounded forehead, and unseen hands stripped him of his clothes and stole his wallet. He couldn’t find any policemen to help him; they had also become invisible and left their posts.

An invisible car struck Wang and killed him.

Chen was stunned for a moment.

He turned and left the scene.

A few days later, everyone in the city had become invisible—except Chen. Terrified and alone, he tried to get the procedure, but he couldn’t find the now-invisible beauty salon. He had nowhere to go. His office was gone, and he tried to go home, but he could find no trace of even his wife’s voice.

He collapsed and sat on the ground. A faint figure appeared in midair and drifted toward Chen: the upper-half of a man dressed in camouflage. A shocked Chen asked the mysterious man why he wasn’t completely invisible. The man told him that what he saw was only a projection, a recording from before the invisibility procedure. It was a precaution to prevent the man from forgetting his own appearance after turning invisible. He claimed to be Chen’s guide.

Chen now had the sneaking suspicion that he himself had already disappeared. Perhaps he had become invisible a long time ago, but he just didn’t know it. Maybe the Chen that he thought he was was nothing but a projection. He had no choice but to follow his “guide.”

Gradually, Chen realized that the projection spoke and gestured in a manner that reminded him of himself. But the projection looked different, as though something had gone wrong with the recording. The projection then showed him an image of a document, which stated that Chen had been stripped of his right to be invisible.

The document was a mess of mixed tenses and aspects. Maybe it was from the past, or maybe the future. “You are part of something far grander than your understanding,” said the projection. “The universe belongs to the invisible.”

“Only after all have become invisible can all be seen. But we must leave behind one pair of eyes to do the observing. You’ve been chosen.”

“Why me? Who chose me?” Chen couldn’t believe what he was hearing.

“You’re asking a meaningless question. It’s like asking, ‘The universe has existed for 13.7 billion years. Why am I here at this precise moment in this precise place?’ It doesn’t matter who chose you or how.”

“No.” After this final response, the projection and the document disappeared. Chen felt even more confused and terrified, but he was exhausted and fell asleep.

When he woke up, the sun was gone and so were the stars. The entire universe had turned invisible.

But just then, he saw all, and the truth was intolerable.

Is there a world full of the invisible observing me, a man who has been deprived of the right to be invisible? What kind of truth are they seeing?

Carrying this sole mystery of the universe, he decided to commit suicide.

That was the start of the true transformation of space-time.

Han Song is a science fiction writer and a journalist at Xinhua, China’s state-owned news agency. As a writing professional whose job forces him to observe much and say little, Han Song has long turned to science fiction as an outlet for creative expression. The rise of science fiction’s reputation in China has put Han Song’s name at the top of many sci-fi reading lists, and several of his stories have been translated into foreign languages.

Ken Liu is an author and translator of speculative fiction, as well as a lawyer and programmer. A winner of the Nebula, Hugo, and World Fantasy awards, he has published a series of epic fantasy inspired by Chinese history (The Grace of Kings and The Wall of Storms), as well as a collection of short stories, The Paper Menagerie and Other Stories. He’s also the translator for Liu Cixin’s The Three-Body Problem, the first translated novel to win the Hugo.