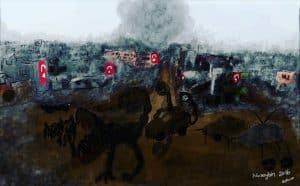 Tell Secretary of State Rex Tillerson and the U.S. Ambassador to Turkey to fight for Zehra Doğan »

In July 2016, Turkish-Kurdish artist and journalist Zehra Doğan was arrested for creating a painting depicting destruction in the Kurdish town of Nusaybin. The painting was based on a photograph taken and disseminated by the Turkish military. Doğan was held in Mardin Women’s Prison until December 9, 2016, when she was released pending trial. Her trial was held in February 2017.

During the trial, Doğan argued that in creating a painting of a real-life event based on a photograph taken and circulated by the Turkish military, she was simply carrying out her work as a registered journalist. Prosecutors disagreed, however, and used her art and writing as evidence against her. On March 24, 2017, the Second High Criminal Court of Mardin province charged Doğan with having connections to the Kurdistan Workers’ Party (PKK) and sentenced her to two years, nine months and twenty-two days in prison. Following the sentencing, Doğan said “I was given two years and 10 months [jail time] only because I painted Turkish flags on destroyed buildings. However, they [Turkish government] caused this. I only painted it.”

Before her arrest and imprisonment, Doğan worked as a journalist in Turkey. In 2015, she won the annual Metin Göktepe Journalism Award for her series of articles about Yazidi women escaping from ISIS captivity. Doğan also served as a writer and editor for Jinha, a feminist news agency staffed entirely by women, publishing news articles in English, Turkish, and Kurdish. Refusing to be deterred from her journalistic work while imprisoned, Doğan set up the newspaper Özgür Gündem Zindan (Free Agenda Dungeon) alongside fellow women inmates.

In addition to her award-winning work as a journalist, Doğan is also a popular painter. While the range of her work is diverse, she often depicts colorful, flowing scenes of Kurdish women and traditional Kurdish life, as well as dark, striking images of war, conflict and other political scenes. Following her arrest, Doğan’s lawyer Asli Pasinli said, “Art and paintings can never be used in such a way. This is an attack on art and artistic expression.

Zehra Doğan’s case is just one harrowing example of the recent increase in suppression of media and free expression in Turkey. Musa Kart is a Turkish cartoonist whose work is known for satirizing Turkish politics in general, particularly President Erdogan. Kart works for Turkey’s leading opposition newspaper, Cumhuriyet, which received Reporters Without Borders’ 2015 Media Award for outstanding work. Kart has a long history of persecution at the hands of the Turkish government. In 2005, he was unsuccessfully charged with libel as a result of his work. In 2014, he was charged with “insulting through publication and slander” after drawing a cartoon of Erdogan overseeing a large scale money-laundering operation which took place that year in Turkey, though he was ultimately found not guilty. In early November 2016, nineteen Cumhuriyet staff members, including Kart, were arrested in raids by Turkish police. They were incarcerated for more than five months without charge until their indictment on April 4.

Ekin Onat is another Turkish artist pushing back against restrictions on free expression in Turkey. An installation and performance artist whose work is focused on feminism, Onat explores issues such as rape, sexual abuse, child marriage and the oppression of women under the patriarchy. After becoming involved in the 2013 Gezi Park Protests in Istanbul’s Taksim Square, Onat began to produce work more overtly critical of the Turkish state itself. In May, she will be staging a performance piece at the Venice Bienniale, in which she will make public the details of more than 2,000 cases of state-sanctioned violence perpetrated against Turkish citizens by the police over the last year. At the present moment, Onat is preparing to leave Turkey in response to the government’s stringent crackdown on free expression. Her family has already fled the country.

In the face of censorship, persecution, imprisonment, and a recent referendum that will inevitably usher in alarming new restrictions, these Turkish artists courageously refuse to quiet their creative expression. “Art is not my passion,” Onat has said. “It is my mission.” While in Mardin Women’s Prison, Doğan released a statement saying, “I want to repeat Picasso’s teaching: Do you really think that a painter is just someone who uses her brush to paint bugs and flowers? No artist turns her back on society; a painter needs to use her paintbrush as a weapon against oppressors.”

Doğan’s unjust imprisonment is another in a long line of human rights abuses and a campaign on the part of the Turkish Government to silence journalists and artists. Join PEN America and call for Zehra Dogan’s immediate release.

Tell Secretary of State Rex Tillerson and the U.S. Ambassador to Turkey to fight for Zehra Doğan »