The Encounter of Karen Blixen and Niels Bohr 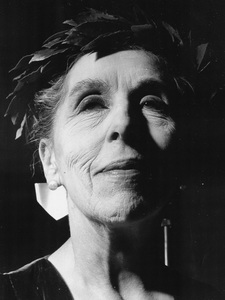 This piece was submitted by Suzanne Brøgger as part of the will 2014 PEN World Voices Online Anthology.

They met for a ceremony at the Royal Castle in Copenhagen, Karen Blixen and Niels Bohr, the two monstres sacrés of Danish cultural history, who happened to be born in the same year, 1885—and both died in 1962. A hundred years later, on the occasion of their centennial, in 1985, a brief correspondence between them was published, originally initiated by Blixen when she was campaigning against vivisection and she implored Niels Bohr to sign.

In a letter dated January 13th, 1955, Blixen makes the plea that especially dogs—her dearest life companions—be exempt from scientific experiments like vivisection. Niels Bohr—who remembered the discussions about vivisection from his own youth, having spent time in his father’s laboratory—looked into the matter, and gently declined to sign Blixen’s campaign. Naturally, the treatment of dogs in science, he said, was a matter of utmost concern. Nevertheless, Bohr argued, dogs hardly contribute to the evolution of spiritual values for which mankind strives. He assured the Baroness, however, that certainly no citizen would ever have to see their dog being abducted by force to have surgery done.

If Niels Bohr could not comply on the question of vivisection, he couldn’t agree more with Blixen’s concern about the divide between scientific and civil society. Blixen deplored the “dirty secrets” seeping from science producing sheer nightmares in the general public—most probably having the nuclear bomb in mind. “I think an understanding must be brought about,” she wrote, “so that people may embrace science and the spirit of light to inform and expand their own view of the world and vision of life.” In response, Niels Bohr sent the Baroness his paper “Unity of knowledge,” on how he, as a physicist, was trying to approach various other challenges of general human concern.

Blixen doesn´t abridge the moral issue of vivisection in relation to animals—let alone how it affects us as humans—to make our fellow creatures into objects for man´s practical purposes. She does state, however, that she feels much closer to animals than to human beings, explaining to Niels Bohr that she found herself in more royal company among giraffes and lions in Africa than she did among nobility at the Royal Castle of Copenhagen. She writes in a letter home from her arrival in Africa:

The spirit of stone? Blixen is no sentimentalist. She objects to scientific experiments done on animals, but doesn’t seem to mind having her own domestic animals devoured by wild beasts—she even enjoys it! Central to her creed was evidently the conviction that there is no greater joy on earth than being connected to creation—an initiation, so to speak, into creativity as such. As she replied to the famous Biblical lament of Job—in the voice of God almighty, of course: Yes, she too could have created the crocodile and the hippopotamus—why not?—only the creation of the two sexes, female/male, man-woman, would have been a lost cause.

One of the favorite quotes of Karen Blixen was the famous Nietzsche dictum: “To ride, to shoot and to tell the Truth.” In the words of her brother, she was a mediocre rider, a bad shot and she never told the truth.

She did not tell the truth in the statistical, empirical sense of fact. She was a truth teller on a deeper level, in a higher sense, creating truth through her imagination. Like a seer she distinguished between people. When seeing a flock of birds, some would count them 1-2-3, and arrive at the number 70. Others just saw the number with the weight of their whole being and life experience.

She saw people as signs and when she connected the dots and drew a line of all her losses she saw, lo and behold, an image that made sense: she depicted her own life in the image of the stork.

Karen Blixen developed her creative powers through the loss of more human connections:

1. She lost her father who hanged himself, when she was a child.

2.She lost her health due to syphilis, given to her by her husband, Bror Blixen, in Africa.

3.She lost her husband, had to accept a divorce against her own will.

4.She lost her beloved Denis Finch Hatton when his plane crashed in Kenya.

5.She lost his child that she apparently was carrying.

6. She lost her family in the sense that she had to make a pact with Lucifer, the devil—the fallen angel—in order to become the artist she was meant to be.

7. And finally she lost the farm in Africa, including the animals, the landscape and last, the Africans for whom she felt the deepest affinity and love.

Blixen subscribed to Nietzsche’s amor fati, love of destiny, meaning that you may create your own life while abiding it’s hidden laws, i.e. acknowledging the laws inherent in the powers of the imagination linked to nature. Like Coleridge, she distinguished between fantasy and imagination.  What is the difference?

We all know the difference between having a holiday—play and free fun—and everyday hard work. That same difference applies to the divide between fantasy and the imagination. In the realm of fantasy you fly over all obstacles, whereas working in the sphere of art, you struggle your way ahead foot by foot. Most people tend to equate the work of the artist with free play. The artist, however, knows that as soon as she/he consults ideas from the playground of fantasy and starts the real work, one is tied, hands and feet, by the laws of a deeper unknown reality. The poet is not the master of imagination. The poet is the servant—as the purpose and intent of the artist must remain invisible. As Blixen said herself in an interview in New York: It would be a mistake to let the imagination run wild, especially for a storyteller.

The love that Blixen felt for Africans has, since her lifetime, been debated in light of colonial history, especially since the recent publication of her “African Letters.” All sources seem to indicate that her love was deep, genuine and reciprocated.

But how did the Kikuyus and the Somalis see her?  They worked with her, for her, for this white colonial upper-middle class lady. But apparently they did not see her that way. They saw her loneliness. They saw her as an outcast. Someone without a tribe, without relations. Sure enough she had a nationality, she had family, she had friends. But deep down, she conveyed a state of belonging nowhere—except, perhaps, to them. She knew no fear. They recognized the fearlessness in her, and so as she says in “Out of Africa,” they transformed her into a mythical being, a symbol, evoking the biblical figure of the “Coppersnake” which has the power to protect against evil. She had, indeed, taken Lucifer, the fallen angel, as her guardian and ally.

In the correspondence from Africa with her Danish relatives she realizes that just as much as she loves them, they have stifled her creative powers. Family relations have not oppressed her deliberately, but done so anyway by emphasizing the importance of values like harmony, happiness and “hygge”. Blixen evokes this family-tendency: to blind one’s ears and eyes to the rest of the world in order to create one’s own little paradise.

Blixen must have felt—approaching a midlife crisis of forty—that in order to become the artist that she was meant to be, or in Blixen-terms: to fulfill the plan God had in mind for her, she had to break away from the claustrophobic, homely atmosphere of goodness, kindness and anxiety.  She had to to become a truth teller—and required the support of the devil to do so.  She could only rely on the assistance of the angel Lucifer who fell from the heavens, cast out, bringing another kind of light with him into the underworld, the torch of truth.

In her letter from April 1st, 1926, Blixen evokes the old Faustian pact that allows you to do research and create. Whether as a scientist or a poet, the price you have to pay is love. You may explore your neverending search for truth, but at the expense of a human relationships. According to the pact with the devil, Mephistopheles, you must never say—in the words of Goethe: “Verweile doch du bist so schön.” You shall never know the kind of bliss that makes you want to stop time. You will always want to go on and on in your search of the imagination. This is the Faustian pact, imagined by Goethe, further developed by Thomas Mann in Doctor Faustus.

After her losses, Blixen had to return to the Danish province and submit to a bourgeois lifestyle as a misfit, a failure of a daughter in her mother’s house. At her age, in the mid-forties, she knew that a woman could choose between becoming a grandmother, an abbess or a witch. No doubt she chose the witch—the witch being an angel in disguise.

And so, the lady of sorrows evolved as a storyteller and a humorist by transforming the Faustian Pact of despair into fun and entertainment.

The boredom of her mother’s house and the bleakness of the Second World War made her turn life into a playground of fun and fantasy. In her writing, she entered the realm of the imagination. In her social life, however, she took refuge in fantasy and magic powers by bewitching her friends, pulling their strings in her own private puppet theatre, meddling in their love lives, trying to break up their marriages and mate them in new constellations.

At least two wives in her circle of friends, the so-called Heretics, fell victim to intrigues, paid a price and died young.

Only Karen Blixen lived on into old age imploring everyone to talk and write about her, already creating her own myth.

In her story, “Carnival,” Lord Byron is told by Pipistrello, the director of a famous puppet theatre, that his books will be read a lot less in the future and gather dust on the shelves. But one book, he adds, will be written over and over again.

“Which book are you talking about?” asks Byron.

“The life of Lord Byron.”

This fate has befallen Karen Blixen. Her life is being told over and over in ever a new light—on the occasion of the celebration of Niels Bohr´s atomic model not so long ago and now again at the 10th anniversary of the PEN World Voices Festival in New York.

This piece has been excerpted from a speech given in Copenhagen for the centennial celebration of Niels Bohr’s atomic model.