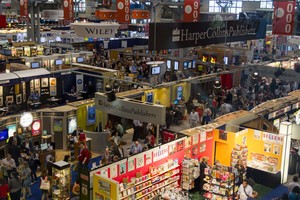 This year, for the first time, BookExpo America (BEA), held each May at the Javits Center in Manhattan, featured translation as the focus of its Global Market Forum.

As a result, May 28 was devoted to a conference (really, a day of panel discussions) on publishing translations (see Rachel Aydt’s nice write-up for Publishing Perspectives), with additional translation programming sprinkled throughout the three days of the expo proper (May 29–31).

As part of this programming, the PEN American Center Translation Committee put together four brief presentations, all held on the East Side Stage, in a corner of the floor dubbed the Translation Market, which was intended to serve as a focal point and meeting place for BEA attendees interested in translation.

The Translation Committee presentations, summarized below, gave practical guidance to publishers and booksellers on publishing translations of literary works into English.

“How to Find the Right Translator for Your Project,” Margaret Carson, translator, 10 a.m., Thursday, May 29

Carson, a translator from Spanish, opened with a brief overview of the PEN American Center Translation Committee and its website, pen.org/translation, offering resources to translators and anyone else interested in literary translation. She then went on to outline several methods publishers can use to find the right translator.

Based on her own experience, Carson advised publishers to seek word-of-mouth recommendations from colleagues. “Most of my work has come through referrals by editors, fellow translators, and writers,” she noted. The advantage to this method is that someone acts as a gateway and can vouch for the translator’s quality and reliability.

If that method fails and a proposed translation arrives with a sample done by a translator, Carson advised publishers to stay with that translator if the project appeals to them and the sample work is strong.

Another method is to consult online resources such as PEN America’s Translator Directory, a listing of translators who belong to PEN and the languages they work with. Carson demonstrated the information visitors can expect to find for each translator: bio, bibliography of translations, and contact information (email, homepage, social networks). Publishers may then decide whether to initiate contact.

A similar directory maintained by the American Literary Translators Association (ALTA) is being transferred to a new website expected to be operational by November 2014. Sean Cotter, an ALTA member who was in the audience, also suggested publishers attend ALTA’s 2014 conference, where they can meet and discuss projects in person with over 300 literary translators.

As a more indirect method, Carson pointed to the Find & Search page at the online magazine Words Without Borders, where you can search according to language and/or country/region. The WWB archive, extending back 10 years, often yields several translations from any given language, allowing publishers to get a feel for translators’ work. Though contact information for translators isn’t given, it can usually be found via online search based on translator bios. Asymptote, an online magazine of international literature founded in 2011, offers a similar search on its homepage.

Have any of these strategies been reinvented in the Web 2.0 era? To answer this question, Carson ended by calling on Ross Ufberg, cofounder of New Vessel Press and a translator from Polish and Russian, to talk about his proposed project Litfinder.org, an online meeting place for translators to post information about authors and works they’re working on but haven’t found a publisher for, and for publishers in turn to search for authors or works they’ve heard about but can’t read in the original.

Ufberg said he envisions the site as a sort of online version of BEA’s Translation Market, a space where translators and publishers can quickly find each other and turn to the business of bringing international literature to an English-speaking audience.

“How to Draw a Crowd for Translation Events,” Alex Zucker, translator, with Kate Garber, store manager of 192 Books, 11 a.m., Thursday, May 29

For this presentation, targeting booksellers, Zucker, a translator from Czech, paired with Kate Garber of 192 Books in Manhattan, known for its lively and innovative events—including a 24-hour reading of Swann’s Way by Marcel Proust in 2013, and, more recently, to mark the release of Harlequin’s Millions by the Czech author Bohumil Hrabal, a conversation between translator Stacey Knecht and author Caleb Crain (whose novel, Necessary Errors, was set in Prague), with the same background music playing in the store as in the novel.

In addition to these, she shared one way the store has found effective to boost sales and spur interest prior to an event, which is to guarantee a seat to anyone who purchases the book in advance. The purchase is not obligatory; anyone can attend the event. But 192 Books is a small venue, and this way customers know they’ll get in and won’t have to stand, while the owners know they’ve made some sales even before they open the door.

“How to Market Your Translated Book,” Michael Barron, publicity director and associate director of New Directions, 2 p.m., Thursday, May 29

Barron’s comments were directed mainly at publishers, though he also emphasized the important role translators play in publicizing their books. Barron noted that New Directions, a small house with a long history and a strong reputation, has a different approach from some publishers, with responsibility for marketing and publicizing shared among the staff, rather than delegated solely to one person or department.

One technique New Directions has used to get the word out about translations and reach readers is to send the manuscript around to U.S. authors who might be intrigued by the work, ask them to write a preface, and have it published in advance of the book itself—in a media outlet rather than an academic journal. The example Barron gave was author Lydia Davis’s preface to Syrian writer Osama Alomar’s Fullblood Arabian, translated from the Arabic by C. J. Collins, which was published on Page-Turner, the New Yorker’s literary blog. Other blogs Barron suggested were The Stream, at Harper’s magazine, and The Daily, at the Paris Review.

Barron cited Sonallah Ibrahim’s Stealth, translated from the Arabic by Hosam Aboul-Ela, as an example of New Directions staff using nontraditional means to promote a translation while at the same time building their own excitement about the work: an animated trailer; a mix of Egyptian music from the 1950s, the period in which the novel is set, assembled for New Directions by a musicologist; and visits to the neighborhood of Little Egypt, in Astoria, Queens (in lieu of a budget-busting trip to Cairo itself).

Some more standard methods Barron suggested were publication of excerpts in advance of publication (he noted the Dial-A-Book Chapter One Program, used by NPR) and the perennial importance of covers. Takashi Hiraide’s The Guest Cat, translated from the Japanese by Eric Selland, was the first New Directions book to crack the New York Times bestseller list since the 1950s, thanks in large part to an image of its cover going viral on Facebook, with over 2000 likes in two hours, according to Barron. Never underestimate the power of cats!

Addressing translators specifically, Barron said it was helpful if they could provide publicity about the author and the book from wherever it was originally published—to document prizes and acclaim of course, but also to help build what Barron called the story around the author, which he cited as, ultimately, the most important factor in a publisher’s ability to market and sell a book.

He closed by saying it was “time for translators to be celebrities.” Not that they should start pushing people out of their way on the street, Barron said to laughter from the audience, but translators shouldn’t be shy about raising their profiles, not only when it comes to their own work, but for translation more generally. As an example he cited the energetic blogging of Susan Bernofsky, aka Translationista, and her updates on translation events and prizes around the world.

Goldstein, a translator from Italian and head of the copy department at the New Yorker, is currently editing The Complete Works of Primo Levi for W.W. Norton & Company (to be published in fall 2015). Her talk covered several issues that often arise in the editing of a literary translation. 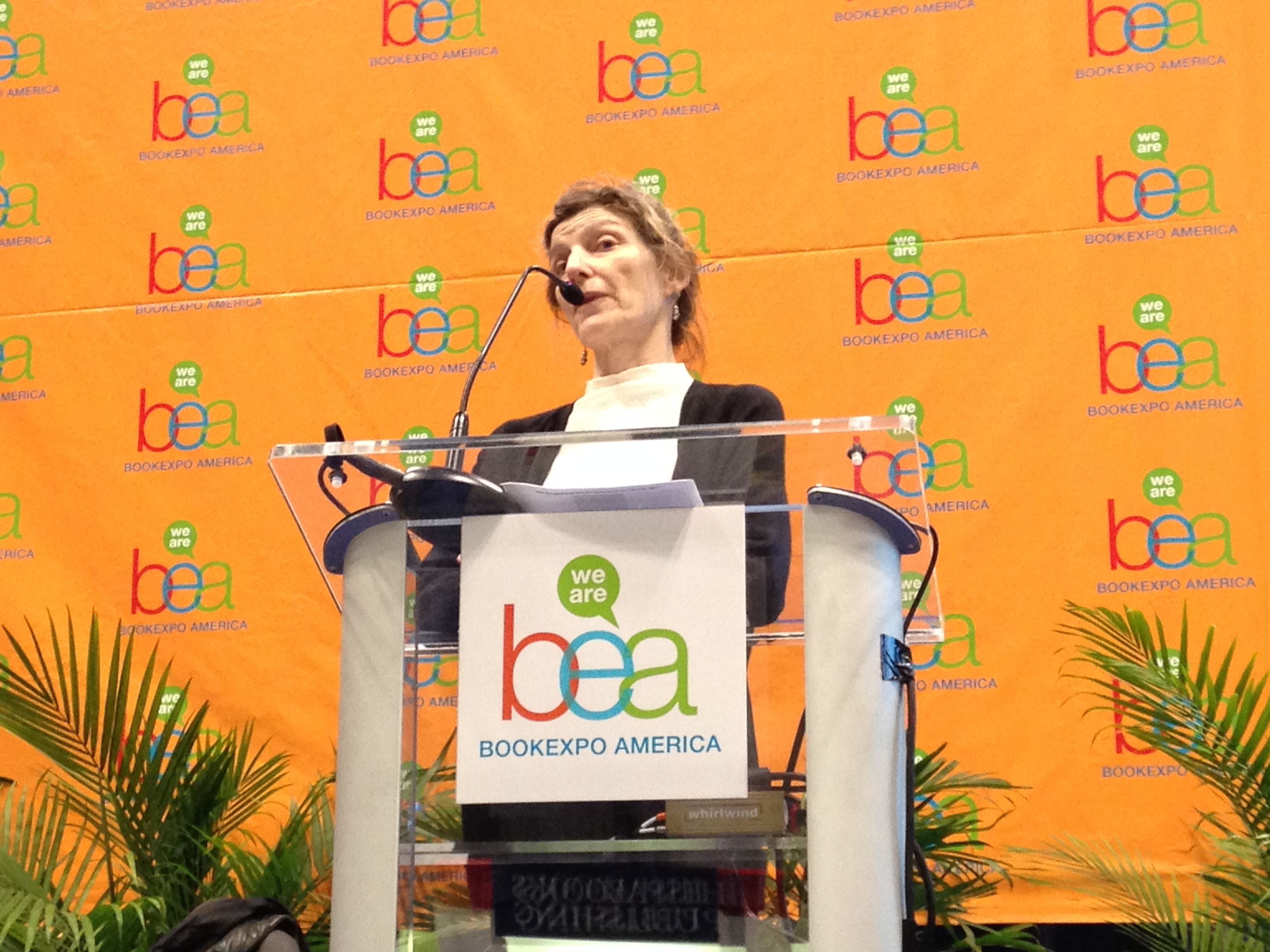 Because a work in translation is written twice—once by the author, then again by the translator—Goldstein observed that editors are essentially working with two authors. The editing process is thus slightly more complicated.

If editors can read the original, they should check the translation for accuracy, Goldstein said, since even the most careful translation contains the occasional mistake. It isn’t necessary for editors to know the foreign language. An odd word or phrase in the manuscript can be flagged for further checking; errors are often found this way. As an example, Goldstein cited a line in one Levi book describing the “shoes, linens, eyeglasses” concentration camp inmates were forced to surrender upon arrival. “Linens” didn’t seem quite right in this context. When the original word was checked in the dictionary, a secondary meaning, “underwear,” was discovered, clearly the intended word, and the correction was made.

On the other hand, Goldstein cited her literal translation of an idiomatic expression—“leaving us with nothing, not even eyes to cry with”—in a novel by Elena Ferrante as an example of a strange-sounding phrase in English that actually works and could be left as is.

Goldstein also pointed out that editors need to expand at times on references that would require no explaining in the original. Again citing Levi, she said English-speaking readers might not understand many of his World War II references. In those instances, she recommends making minor editorial additions to help orient the reader.

Regarding the tricky question of dialect, Goldstein observed that it rarely works for translators to employ a seemingly analogous dialect—Southern U.S. English for Southern Italian dialect, for example, or 1920s gangster slang in an Italian noir novel. She described a solution used by Ferrante: instead of attempting to reproduce the sound of dialect on the page, the author simply informs the reader that her characters are speaking “in dialect.” Goldstein considers this a possible workaround to one of the more intractable problems faced by translators.

In closing, Goldstein emphasized that the editor’s job is to achieve consistency of tone throughout the translation, especially if a team of translators is at work, as is the case with the multi-volume Levi project.