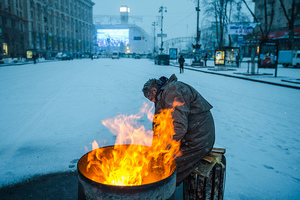 Last month, Serhii Zhadan, one of the best and most well known poets in Ukraine was beaten up during the civil unrest in Kharkiv. He has since recovered and was able to join my online conversation. Here, he is joined by Iryna Shuvalova, a wonderful young Ukrainian poet, translator and anthologists, as well as Andrei Khadanovich from Belarus, author of eight books and translator from several languages into Belorussian, and Valzhyna Mort, Belorussian poet who also writes in English and is generally considered one of the best younger poets at work in the world today.

Since my last post, Crimea has been annexed. The Russian army continues amassing on Ukrainian borders. Many more oligarch and robber-barons have been appointed to new positions of power in Ukrainian government. Russian war-planes have been stationed in Belarus, a neighbor to both Russia and Ukraine, where Aleksandr Lukashenko, has ruled with a dictator-like approach for two decades. Throughout eastern Ukraine several cities have seen various forms of civil unrest.

As Americans are flooded by the news and propaganda, it may be a good idea to listen to poets from the region. What do they say about poetry from Eastern Europe? How is it different from Western Europe? How do they see their landscape? What is the place of a poet in the time of unrest? This month, I want to introduce a roundtable conversation of poets from the region. Because the turn of events and political situation in Ukraine will—no doubt—affect Belarus as well, two poets from that country are also featured.

Iryna Shuvalova (Ukraine) It is important, I think, not to speak just about Western European poetry in this context. Ukraine has long had strong interest in and ties with the literatures of our Slavic neighbors, especially Poland and Czech Republic. Besides, as in most of Europe, in Ukraine there has been a persistent interest in the literature of Greek and Roman antiquity. Biblical tradition heavily also had a strong influence on Ukrainian literature and poetry in particular. In short, there has always been an active exchange going on, even when at times it seemed an impossible fit for Ukrainians to remain engaged in it.

There has been a definite interest in other countries’ literary work in Kievan Rus’ (the great-great-grandmother of the modern Ukrainian state) since at least the 11-th century CE. Already in the chronicles of 1037 there is a mention of a team of scriveners and translators gathered by the ruler of the land, prince Yaroslav. The interest lay initially in the Christian spiritual writing, but later spread to secular writing as well. Translation, in particular, definitely served as a vehicle of cultural exchange between Ukrainian poetry and other European poetic traditions. As early as in the 13-th century students from what is now known as Ukraine (then commonly identified as Ruthenia) were studying in Europe’s prominent universities, such as Sorbonne, acquiring, among other things, mastery of languages. This, of course, greatly benefited the cultural exchange processes. What became a serious obstacle, however, was the policies limiting the use and denouncing the status of Ukrainian language.

It is interesting that out of many political entities, of which Ukrainian lands and people used to be a part (the Golden Horde, the Grand Duchy of Lithuania, the Kingdom of Poland, the Crimean Khanate, the Austro-Hungarian Empire) it was almost exclusively the Russian Empire and later the USSR implementing the harsh language policies. Still, thanks to the efforts of Ukrainian cultural activists and writers, often risking their reputation or even their freedom, numerous translations were being carried out even in those difficult times. Ukrainian poet Vasyl Stus, who spent 23 years of his life in imprisonment for “anti-Soviet activity” and died in 1985, was translating Rilke in his prison cell. His hand-written book of poems and translations “The Soul-Bird”, containing around 100 poems, has been confiscated by the prison authorities and forever lost. Fortunately, however, many of Stus’s translations have been preserved and can now be freely accessed.

Andrei Khadanovich (Belarus) Translation brings freshness. Milosz, Herbert, and Szymborska and others who my collegues and I translate, in Belarusian translation they do not appear as classics, but as new authors that are different not only from classics but also from a stereotype of a classic in our mass consciouness. I think the readers enjoy ironic and self-ironic Szymborska, whose book was just published. In general, it’s good to break the artificial borders between literatures: Belarusian literature, Russian literature, foreign literature. It’s enough to divide into fresh and trite, verse and not prose.

Serhiy Zhadan (Ukraine) our connection to Western European is very strong—after all, as young writers we start reading poetry with the famous «damned poets»—the French We read poets from Germany, Poland, Austria, America. They obviously influence our own writing. But I have no doubt that the wish to go against their tradition is also strongly present here. In fact, it should be expected in our younger poets, it would be strange otherwise. My poets are Celan, Milosz, Lorca, Baudelaire.

Iryna Shuvalova (Ukraine) I do have this feeling that every poet grows from a landscape, like a strange plant of sorts, and never really manages to dis-attach herself from it. Ukrainian landscape I would describe as a very generous, even lush one. Whatever one’s eye wants to find, it will almost certainly discover somewhere. Ukraine is a land of great natural diversity – with its mountains, forests, grasslands, rivers, rock formations, meadows, hills, vineyards and orchards, rugged seashore and sprawling estuaries. Ours is a land, where things grow swiftly and naturally, where earth is full of unmistakable power. I would say that poetry that grows from this land is also very organic.

Andrei Khadanovich (Belarus) I can describe the influence of lanscape on me with the following example. About ten years ago as a young poet I came for the first time to Berlin, with its freedom and multiculturalism, where on the street you could hear fifteen languages at once. My psychi didn’t survive the joy of being there, and, having written only traditional verse before, then in Berlin started writing free verse. A week after, upon my return to Belarus, I went on a water trip with my writer-friends. We were canoing. And, rhythmically working the oars, I went back to the regular meters and started rhyming again. Partisan-style mimicry, isn’t it?

Serhiy Zhadan (Ukraine) There is no one Ukranian landscape. The landscape of Crimea is drastically different from Galicia. Perhaps, one might see something in that very diversity. I live in the Eastern Ukraine and it’s flat and endless, and this horizonality, this endlessness has always held me under a spell, and I’m trying capture it through text.

Each poet has been asked to briefly introduce their country by a few lines of poetry.

Serhiy Zhadan (Ukraine)  How about these lines from Yuri Andrukhovich:

What can I do? The coarse voice of a surma-horn.
I walked roundly half the world.
I could walk barefoot after your coffin,
dear lady, old motherland.

Irina Shuvalova (Ukraine) Here are a few lines from a poem “Daily Bread” written in 1936 by Bohdan-Ihor Antonych, who became an iconic figure in Ukrainian poetry, although he only lived to be 28.

Snatching away from the envious death
the songs,
the drunkenness,
the nights and the days.

Andrei Khadanovich (Belarus) I’ll give you six lines, from our classic, Maxim Tank:

Valzhyna Mort (Belarus) I’ll link you to two poems, “A Game” and “Memory of Cranes,” by Uladzimir Nyaklyaeu. They are both short:

Before noon the sky grew dark and later
it fell on the road as black fire.

I leaned, picked up the fire, and tossed it
from one hand to the other.

The fire scorched my right hand,
and blackened the left…

A migrating bird has broken its wing against the wire
of my father’s house.
Now it shrieks as if somebody were sawing iron:
It’s you!
It’s your fault!
In response, the flock
turns around…