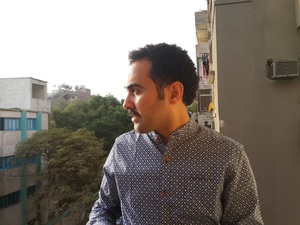 This month, PEN features the case of 2016 PEN/Barbey Freedom to Write Award winner Ahmed Naji, whose case is emblematic of the widening and escalating crackdown on free expression in Egypt. The country, where arrests of journalists on trumped-up charges of terrorism or false news have become common occurrences, is currently experiencing a surge in arrests of and attacks against those who exercise their right to freedom of expression in the arenas of art, activism, and literature.

A growing terror threat in the form of ISIS, which is gaining traction in the Sinai Peninsula, and unfulfilled promises of economic growth have fueled President Sisi’s paranoia about dissent against him and loss of power. Sisi, who became president in 2014 after a coup d’état deposing democratically elected President Morsi in 2013, has subsequently ramped up arrests of activists, writers, and journalists.

In December, government forces shut down a publishing house, an art gallery, and a theater close to Tahrir Square, where most of the protests against the coup d’état took place in 2013. Going far beyond instances of crushing free expression, Sisi’s government continues to close spaces for discussion, expression, and activism. Recently, Sisi’s government raided the Egyptian Press Syndicate’s building, arrested dozens of protestors and activists ahead of protests against President Sisi’s handover of the Red Islands to Saudi Arabia, and persecuted human rights activists like Hossam Bahgat and Gamal Eid. Ahmed Naji’s fiction drew the ire of the Egyptian government, expanding the curtailing of free expression from the realms of journalism and activism into the realms of culture and daily life in Egypt.

Ahmed Naji is currently serving a two-year prison term in Egypt for “violating public modesty.” He was charged by state prosecutors after an Egyptian citizen complained that an excerpt from Naji’s book, The Use of Life, had caused him to experience heart palpitations and a drop in blood pressure due to certain sexual content in the story. Prosecutors argued that Naji’s use of “vulgar” phrases and sexually explicit scenes constituted a “disease” destroying Egyptian social values. Naji and his lawyer argued that the words used in his novel were widely used in common conversation in Cairo and also in classical Arabic literature.

A lower court had previously acquitted Naji in December 2015, but on appeal a higher court found Naji guilty and sentenced him to the maximum prison term of two years. Immediately after his sentencing on February 20, 2016, Naji was taken to prison.

The Egyptian Constitution, drafted in 2014, explicitly guarantees freedom of artistic and literary creation, freedom of thought and opinion, and freedom of the press; Article 67 forbids the jailing of artists and writers for publishing their work. However, Article 178 of the Penal Code, under which Naji was sentenced, criminalizes content that violates public morals.

For more context about the free expression crisis in Egypt, read our February Featured Cases post.

Join 120 writers, including Chimamanda Adichie and Philip Roth, to call for the release of Ahmed Naji. Read and sign the letter.

Creativity is not a crime. @AlsisiOfficial, release Ahmed Naji & all artists jailed in Egypt: http://bit.ly/ahmed-naji #FreeNaji