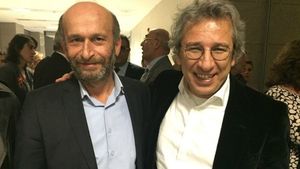 Prison sentences imposed on Cumhuriyet journalists Can Dündar and Erdem Gül after their conviction yesterday of “revealing state secrets” are a further demonstration of the lack of independence of the judiciary in Turkey, PEN International, PEN Turkey and English PEN said today. The global association of writers called for the convictions and sentences to be overturned immediately. The journalists remain free pending appeal.

In a further shocking development, Dündar narrowly escaped injury when a gunman shot at him outside the courtroom, shouting “traitor.” Another journalist, NTV reporter Yağız Şenkal, was slightly injured in the leg. The gunman was arrested and detained.

“That leading journalists, Can Dündar and Erdem Gül were unjustly sentenced is a dark day for Turkey’s justice system and a dark day for press freedom. That they were both convicted just hours after an attempted shooting at Dündar is another disturbing development in case that is reminiscent of Hrant Dink and other journalists who have been killed in Turkey. Turkey must fully and immediately investigate the shooting and cease imprisoning its journalists. We call on Turkey to overturn these sentences immediately and unconditionally.” Carles Torner, PEN International Executive Director.

PEN International is calling for a full investigation into the shooting, including the motives and whether anyone else was involved in planning it. Turkey has a history of political killings of prominent journalists and activists, from Hrant Dink nearly 10 years ago, to that of lawyer Tahir Elci in November 2015. Both had faced criminal prosecutions for expressing their opinions prior to their murders.

Can Dündar and Erdem Gül were sentenced to five years and 10 months and five years in prison respectively for “revealing state secrets.” They were acquitted of “attempting to organise a coup against the state,” and further charges of “aiding an armed organisation” were separated out into a different proceeding.

The charges relate to a story by Dündar published in Cumhuriyet on May 29, 2015 about alleged Turkish arms transfers to Syrian armed opposition groups, including a link to a video appearing to show armaments hidden in a Turkish truck on the way to Syria.

The report challenged Turkish government claims of transferring humanitarian aid to Syria. After the article was published, former Prime Minister Ahmet Davutoğlu and President Erdoğan accused the newspaper and Dündar of espionage. On May 31, 2015, Erdoğan threatened Dündar in a TV interview, stating, “The person who wrote this news shall pay a heavy price for it.”

Following a complaint by Erdoğan, the two journalists were arrested on November 26, 2015 and spent 92 days in detention, accused of publishing “fake images and information” and of espionage, a coup attempt, and aiding an illegal organization. These allegations are reflected in the charges against the two journalists. They were released from prison on February 26, 2016, following a Constitutional Court ruling that their pre-trial detention was unlawful, arbitrary, and disproportionate, and interfered with their right to freedom of expression.

President Erdoğan criticized the releases, stating that he had “no respect” for the ruling and would “not abide by it.”