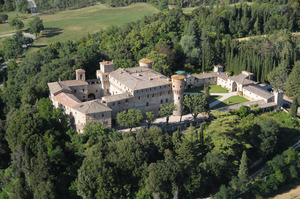 PEN is proud to announce a new partnership with the Civitella Ranieri Foundation. As part of this special collaboration, PEN will send one of its Professional Members to the Civitella Ranieri Center in Umbria, Italy to attend one of its highly coveted six-week residencies. The inaugural residency, to take place in 2015, will go to poet Natalie Diaz.

Located in a 15th Century castle, the Civitella Ranieri Center is an international gathering place where writers, composers, and visual artists from varied backgrounds are able pursue their work and exchange ideas in a resplendent country setting. Building on the legacy of their founder, Ursula Corning, every two years the Civitella Ranieri Foundation will open its Center and offer a six-week residency to a select PEN Member chosen by a panel of judges from PEN’s Membership Committee. Each year’s candidates will be pulled from a small pool of applicants invited to apply.

PEN congratulates Ms. Diaz on this opportunity and looks forward to dispatches issued during her residency. Natalie Diaz is the recipient of a 2012 Native Arts and Cultures Foundation Literature Fellowship, a 2012 Lannan Literary Fellowship, and a 2014 Holmes National Poetry Prize from Princeton University. Her first book, When My Brother Was an Aztec, was published in 2012 by Copper Canyon Press. She lives in Mohave Valley, Arizona where she helps revitalize and teach the Mojave language with the last Elder speakers at Fort Mojave. She also teaches in the Institute of American Indian Arts Low Rez MFA Program in Santa Fe.

Writer & professor Maung Thar Cho is one of several writers who were detained in the early hours of the 2021 #MyanmarCoup. Read more about #WhatsHappeningInMyanmar and how writers are resisting the military’s brutal crackdown in the #FreedomToWrite Index: https://bit.ly/3rKBhUj