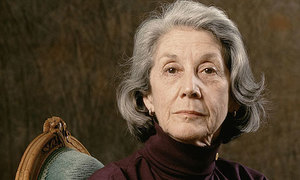 PEN American Center and the literary community mourn today the loss of writer-activist Nadine Gordimer, who passed away at her home in Johannesburg, South Africa last night at age 90.

In her more than 40 novels, plays, short story and essay collections, Gordimer’s writing grappled with issues of race and morality at a time when both had been severely degraded by apartheid policies in South Africa. Despite a ban on four of her works under apartheid censorship laws, Gordimer continued to use words as a weapon against racism and violence, personifying PEN’s foundational belief that literature is a powerful tool for the dispelling of hatred.

“Nadine Gordimer was a remarkable author activist who did as much as anyone to rouse the conscience of the world to the iniquities of apartheid in South Africa, and she did this in the face of considerable danger and ostracism at home,” said Peter Godwin, PEN American Center President and friend of late author.

Gordimer was awarded the Nobel Prize in Literature in 1991. She also served as a vice president of PEN International, and gave the prestigious PEN/Arthur Miller Freedom to Write Lecture at the 2007 PEN World Voices Festival in New York.

Our thoughts today go out to Gordimer’s family and loved ones as they remember the talented author and fierce advocate for equality. Hers was a life well lived.