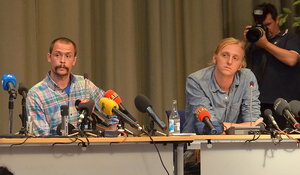 Drive around 25 kilometres south of Addis Ababa, the capital of Ethiopia, and stop at Kality where the infamous central prison of the country is located. If it is on a weekend, you will notice many people flocking down into a rocky road to access the back door of the Kality prison. No one knows how many prisoners are kept on any given day in this compound. Undoubtedly, among the visitors are those who want to see “the journalists” (“gazetegnochu” as they are referred to in Amharic): Re’eyot Alemu (14 years), Woubshet Taye (14 years), Elias Kifle (life, in absentia), Martin Schibbye (11 years), Johan Persson (11 years), and Eskinder Nega (expecting a verdict). All these journalists are charged with terrorism and “found” guilty by the “court.” The numbers in brackets are the sentences each received, where the last one is awaiting a final verdict along with five other journalists charged in absentia. [Editor’s Note: Nega has since been found guilty and sentenced to 18 years.]

The name Kality has entered the local vocabulary as a substitute for rigorous, politically motivated imprisonment. Kality is divided into eight zones. The prisoners found one more zone of their own imagination: they call the rest of the country beyond their compound “zone 9,” implying everyone in Ethiopia is in some sort of virtual prison. It is a matter of degree and court ritual that divides those in Kality from those outside of it. Prison became part of every political discourse, especially since the government arrested more than 40,000 citizens all over the country within two weeks during the aftermath of the 2005 election. Actually, the well known human rights advocate, politician, and former prisoner, Professor Mesfin Woldemariam, divided the population of Ethiopia into three: those in prison, those who were in prison, and those who will be imprisoned.

Visitors who want to visit prisoners accused of “terrorism” or who are politicians are required to show their ID and to register. You won’t be registered if you are visiting a criminal who has killed a family of five or a gang leader. Very few dare to visit prisoners of conscience for fear of reprisals. Far worse, a prisoner can be denied his right to be visited by a lawyer without any explanation. None of these Ethiopian journalists are allowed to get books or newspapers. Re’eyot Alemu had to wait months to get a treatment on her breast. I wonder how Martin and Johan are treated in this regard. My friends who went to visit the remaining journalists have never seen Martin and Johan. Are they free to be visited by their family members, friends, and supporters? Can anyone go and visit the two?

These days, whenever I need to invoke a compelling case to show the situation in Ethiopia, the first example I should mention is the two Swedish journalists sentenced on charges of “terrorism” in Ethiopia. These two Swedish journalists, Martin Schibbye and Johan Persson, were arrested on July 1, 2011, in the troubled Somali region of Ethiopia bordering Somalia. Consequently, they were charged by the Ethiopian government for entering the country illegally and “supporting terrorism.” It has been five months since the “court” sentenced the two to 11 years in prison. With this unfortunate arrest and sentencing of the two journalists, repression in Ethiopia finally became more real, personal, and closer to most in the West.

Were the content of the “terrorism” charges against the two Swedish journalists surprising for Ethiopians? Were the allegations or “evidence” against the two convincing beyond reasonable doubt? Is the decision of the “court” free from political interference? Can the profession of the two defendants make their case exceptional? Within the context of current Ethiopia, the answer to all these questions is NO. There is very little to be surprised about in the whole affair.

What informed the arrest and sentencing of journalists, not to mention their release, is the nature of the regime in Ethiopia, not what the journalists did or didn’t do. Understanding the position of this regime will help one to see the fate of Martin and Johan in perspective.

The crackdown against journalists and dissidents in Ethiopia was institutionalized and exercised long before Johan and Martin arrived at the scene. Not only had the government registered a consistent record of repressing citizens’ rights, but it also institutionalized the repression. The attacks against journalists and outspoken critics—save political activists—were disorganized, sporadic, and less institutionalized prior to the historic election of 2005. Following this relatively free and fair election and the consequent public protest, the government came up with a comprehensive and systematic approach to silence all dissenting views.

2005 was a rude awakening to the government of PM Meles Zenawi. After more than 20 newspapers were closed in the immediate aftermath of the election, journalists were charged and convicted on “treason, inciting violence …” alongside hundreds of opposition leaders. That was the turning point in institutionalizing repression, particularly against freedom of speech and assembly.

Theorizing the legitimacy—or rather, the importance—of repressing freedom of speech by all means was the first stage. This came with a concerted campaign of discrediting the ‘independent’ or ‘free’ press. The culmination of the crackdown was marked by the coming of two draconian laws: the Anti-Terrorism Law and Charity Law. These two laws practically criminalize dissent and discourage human rights advocacy. The far-reaching effect of these two laws alarmed only a few advocacy groups before the laws came into effect in 2009. Ethiopia was already under the international spotlight for its systematic repression when Johan and Martin set foot to investigate the situation in Ogaden.

Martin and Johan arrived in Ogaden where the Ethiopian government laid down all legal and military preparations to control every aspect of life. The control includes the flow of information from and to the region. I don’t remember a single independent local journalist who dared to go to Ogaden. The few foreign journalists who tried to access the area were expelled immediately. It was simply a forbidden zone for independent journalists and researchers. The plan of the two journalists to investigate the situation in Ogaden was in direct defiance to the visible and invisible wall of control. Therefore, [the government decided] they must be punished in a manner that may give lesson to others. Reportedly, not only were Martin and Johan found in the wrong place but with the ‘wrong’ group of people—namely, members of the outlawed Ogaden Liberation Front (ONLF).

The “terrorism” charge against journalists has nothing to do with what the defendants committed, or omitted, with regards to terrorism, as the world understands the concept. In the words of Nicholas D. Kristof of the New York Times, the offense of the defendants was “courage.”

It is all about staying in power for the government of PM Meles Zenawi, who has been leading the country for 21 years. Controlling the content and flow of information by all means is tantamount to the political survival of the regime. The release of the journalists, particularly the two Swedish journalists, depends on the political calculus of PM Meles in his bargain with the West, in exchange for the diplomatic and financial support he survived on for two decades. Three months have elapsed since the EU senior diplomat, Louis Michel, told us to wait “few days” to see if Martin and Johan would be released. How long is a day in the EU diplomatic vocabulary? We would like to believe that a word from the White House shortens a prison day in Ethiopia, whether the prisoner is an Ethiopian or not. Human Right Watch had this to say: “The conviction of two Swedish journalists should be a flashing alarm to the world that no one is safe from unfair prosecution in Ethiopia today.”

[Editor’s Note: Martin Schibbye and Johan Persson were released from Kailty on September 10, 2012 after more than a year in prison.]

Congratulations to our friend @MargaretAtwood, whose prolific work spanning decades is being celebrated on a newly-unveiled Canadian stamp.