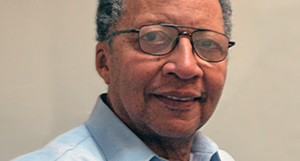 Fatima Shaik, Co-chair of PEN’s Young Adult and Children’s Committe, pays tribute Walter Dean Myers, acclaimed author of books for and about young African Americans, who passed away yesterday at the age of 76.

I first met Walter Dean Myers in a meeting of Third World Writers, an inspired and slightly contentious group in the early 1980s that included Ntozake Shange, Jessica Hagedorn, Patricia Spears Jones, Wesley Brown, Arthur Flowers, and others who would soon take on several arts organizations over their underfunding of people of color. Myers was less interested in the politics of the writers group than the camaraderie, and so was I. We talked about the mechanics and ideals of writing, and ways to get published well. By then I hadn’t written a book. He had just a few.

He changed that quickly.  By the time he died on July 1, 2014, he had written more than 100 books. Some were finalists for the National Book Award, Newbery Honor books, and Coretta Scott King Award winners. He earned a Margaret A. Edwards lifetime achievement award. He was nominated for the Hans Christian Anderson Award, one of the highest given to a children’s writer.

Myers lived in Jersey City with his wife Constance and his sons Michael Dean and Christopher, the latter an award winning writer and illustrator. He took his strolls around 9 a.m. on Jersey City’s Kennedy Boulevard, where I saw him frequently on my way to teach early morning classes at Saint Peter’s University. He was always friendly, inspiring, and warm. I am sure I am not the only person who felt this presence.

Once when I was in New Orleans, I saw him speak to elementary school teachers. He was in his element.

His element was as a spokesman for the male point of view in black literature for children. He wanted to carry the banner for color and gender to give voice to the many overlooked boys. I never once spoke to him when he didn’t tell me about his visits to prisons, his representation at conferences, or his participation in publishing groups. He did this work not because he wanted to spend his time that way, but because he felt he needed to speak up against the censorship that children experienced when no one recognized their needs.

He was a wonderful advocate and an excellent choice in 2012 as the National Ambassador for Young People’s Literature. If people didn’t like what he stood for—children at their most vulnerable—they didn’t know about the essence of childhood. It is a vulnerable state for any person of any color.

I taught Myers’ book Monster each year in the first hours of my literature course for adults in the Public Policy program at Saint Peter’s. The book was a quick classroom read for people going back to school, many of whom had day jobs as social workers, in government programs, and in prisons. I saw that my students knew Myers’ environments intimately. Sometimes they were brought to tears by the timeless ethical question asked in Monster: Is a boy who knows about a crime also guilty of a crime if he doesn’t report it? These adults knew just how many of us witness small and large crimes every day—in local settings and across the world—and how many of us don’t do anything.

Myers was no lightweight. He was a fine man who elevated children’s literature and brought truth to all of us. Thanks Walter, for being a real children’s writer and a real person. We owe you a debt.