PEN Writers in the Schools 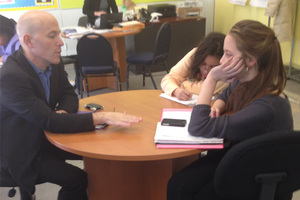 Wesley Morris, William Hogeland, and I spent the year working with a group of ninth graders at MESA. Each week we began by talking a bit about what they had been reading in their classes (this ranged from Poe to Junot Diaz) or by introducing them to a piece of literature (whether a poem by Dickinson or a passage from the Bible). The students were fully engaged and enthusiastic interpreters.

And then they wrote.

They wrote profiles; they wrote criticism of movies and music; they wrote poems and short stories. And no matter what they were working on, during the writing time, the room went silent. These kids were focused. They gave me hope that the kind of creative accomplishment William and I saw regularly during our long years of teaching in one of the city’s top private schools can be achieved at MESA among students, most of them Hispanic, from far less privileged backgrounds than students at schools like Saint Ann’s.

So far our group is small. This is a fledgling project. But at the end of the year, we produced a magazine, The Real Cut, and we held a reading for the entire school. The writers practiced reading their work aloud, and when the time came to take the stage in the giant auditorium, they kept their eyes up, their voices loud, their cadences strong—and they kept the audience rapt. We are extremely proud of them, and look forward to working with an expanded group next year.

I’ve been meeting two Fridays a month since October with the new writing club at Francis Lewis High School. A revolving group of about 25 students has worked with me—and they do most of the work—to revive the school’s dormant literary magazine, for which they selected a new name: Pendemonium. With dozens of submissions, including poetry, short stories, flash fiction, essays, photos, and illustrations, we have now produced our first issue.

The real pleasure in all this has been the quality of the content. These students—many from Indian, Pakistani, and Chinese immigrant households and the first in their families to speak English fluently—have produced beautiful haiku, poetry, and short fiction. Their work is often of real poignancy: in one fictional story, a young woman experiences the small but meaningful domestic betrayal of an older brother reneging on his promise to take her to the zoo.

A few of the haiku are equal to any classical work—no exaggeration. Take this one, from Sabrina:

Cherry blossoms are
Too beautiful to be gone

So early this time

These kids are real writers. We’ve had success on all counts.

This year, Manhattan Center instituted a new program offering daily small-group writing classes for ninth graders most in need of help. Four to five tutors worked with classroom teachers all year; I met with my class once a week. Jane Amendola, the teacher I work with, eagerly embraced my involvement. Sometimes Jane and I assigned a reading and then talked about how the writer accomplished his or her goal. Students wrote essays based on those insights, and then read them in front of the class. I regularly met with the students one-on-one both to give encouragement and to make suggestions, which I asked them to incorporate into new drafts.

Jane and I could see the students grow over the course of the spring semester. Kids who had at first read inaudibly raised their voices. They began to critique one another’s work. They accepted the idea of revision. Above all, they looked forward to writing and to talking about writing. I don’t want to exaggerate the degree of change—many of these kids are very tentative writers. But over those few months, they came to regard writing as something plastic—an instrument they could use to express themselves rather than an onerous burden imposed by school. It was an incredibly gratifying experience for me, and a very exciting one for Manhattan Center, which plans to expand the program next year.

School districts from Pennsylvania to Wyoming are bowing to pressure from some conservative groups to review — then purge from public school libraries — books about LGBTQ issues and people of color. https://www.axios.com/a-book-purge-surge-35989d99-cfdf-4c5e-b9fd-daa857c50079.html

Congrats to @cait_meissner for THE SENTENCES THAT CREATE US, unique insights of over fifty justice-involved contributors & their allies offering inspiration and resources for creating a literary life in prison. Out today from @HaymarketBooks & @penamerica! http://pen.org/sentencesthatcreateus